Every spring, Paris goes a little bit crazy for drawings. The dealers’ galleries put on displays; there’s an art fair at the Bourse; and the museums and libraries hold exhibitions giving us a glimpse of the beautiful things which spend most of the year tucked away in print rooms. This year, the Fondation Custodia triumphs with a real treat of a show.

They’ve borrowed more than a hundred Dutch and Flemish drawings from the Boijmans in Rotterdam, and the result is an exhibition which forms a perfect introduction to draughtsmanship in the Netherlands between around 1400 and 1600 (with the emphasis on the second half of that period). Beginning with a group of early Renaissance silverpoint drawings, and concluding with Wtewael, Bloemaert and the full flower of Utrecht Mannerism, this truly is an embarrassment of riches.

Among the silverpoints in the first room is the portrait of a girl by Petrus Christus, drawn in about 1450. Although the sheet has suffered a bit, it’s still a luminous and beautiful drawing, crisp and with an almost translucent sense of light. For those who aren’t familiar with silverpoint, it was an exacting technique: the use of prepared paper meant that mistaken lines couldn’t be rubbed out. It required an artist to be absolutely precise and absolutely confident. And Petrus Christus is confident, as he depicts the girl’s serious, delicate face, the soft fur trimmings of her robe and the deep, shadowed folds of her sleeves. Wonderful. And, jumping out of the exhibition’s chronological format, it’s interesting to juxtapose this image of young womanhood with another example from the end of the show, equally beautiful and tender, but so very different stylistically. In Abraham Bloemaert’s red-chalk studies of a girl, from about 1600, the lines swoop and curve, giving an impression of great freedom and spontaneity, with white heightening used to suggest the shimmer of light on the model’s sleeve.

The early drawings, like the Petrus Christus, impressed me in an aesthetic, intellectual kind of way, but I found myself reacting with increasingly incoherent wonder to the later 16th and early 17th-century drawings. Usually when I go round an exhibition I take a notebook so that I can keep track of my thoughts later; but here my notes don’t suggest any train of thought beyond the wide-eyed excitement of a child in a sweet-shop, and I swiftly come into danger of running out of superlatives. ‘Really striking’, I write about a Pieter Bruegel landscape; ‘Remarkable. Figure of Job stunning’ about Maerten van Heemskerck’s Job on the Dunghill. By the time I’d moved onto the next wall of that room, faced with Heemskerck’s masterly drawings of the Triumphs of Isaac, Joseph and St Stephen, my words are flagging and I can only manage ‘All remarkable’. But I bounce back with Hendrick Goltzius’s Portraits of Jan Baertsz. and Maritgen Pietersdochter, two staggeringly beautiful little roundels that earn the scrawled comment ‘Absolutely stupendous’, underlined twice for good measure.

Let me try to explain why they impressed me so much, because I’m fully aware that drawings don’t do it for everyone. First, consider the age of these sheets. They’re all roughly around four hundred years old and yet these pieces of paper have survived not only intact but in incredibly fresh condition. Virtually every drawing in this exhibition is an excellent example of that artist’s work and often the same artist will be shown experimenting in different styles and techniques. Take Hendrick Goltzius, for example. He was one of the most brilliant draughtsmen and printmakers of his day. The two portraits I mentioned earlier show him working with the finesse of a miniaturist, but it’s not just their technical skill that makes them so wonderful. The sitters are the artist’s parents-in-law and the portraits were probably commissioned as gifts for Goltzius’s new wife, their daughter. Suddenly it becomes clear exactly why so much care has gone into these exquisite portraits, and why both figures are shown with such warmth and affection. Behind each of them you can see scenes from their everyday lives: Jan Baertsz. is shown standing proudly in front of his shipyard, while his wife is shown in front of the family’s house and estate.

But Goltzius also excelled in other areas. His little drawing of Doctrina shows an allegorical figure studied with crisp, very controlled pen-lines and cross-hatchings which make it look almost like one of the engravings he was so famous for. It’s a very accomplished piece of work, but it’s also a bit of a game: a trompe l’oeil. Goltzius is playing with us: he’s showing off not only his renown as a printmaker, but also his ability to replicate the effects of his prints in another medium altogether. So, you might say: well, he’s good at small, detailed drawings. But the exhibition has another trump up its sleeve: one of Goltzius’s large portrait drawings in coloured chalk. This bearded man has rosy cheeks and a flushed nose and forehead; seen in the flesh, the condition’s incredible. Goltzius considerately signed and dated this one for us, so we know it was drawn in 1609; and yet it’s as perfectly fresh as if it were done yesterday. These are just three examples – I could go on – but you see how versatile he was.

And that’s just Goltzius. The show is full of wonderful things and pretty much every exhibit is a little masterpiece. There is Hieronymus Bosch’s delightful drawing of an Owls’ Nest: a family of quirky owls bustle home to roost in the hollowed-out trunk of a tree. Beyond them, almost as an afterthought, a troop of tiny pikemen trudge their way across a meadow in the distance. Then there is a wonderful series of twelve drawings of the Months by Hans Bol, each showing figures engaged in an appropriate activity, with the corresponding sign of the Zodiac hovering in the sky overhead. There’s one of the fabulous ‘pikeman’ drawings from Jacques de Gheyn’s series Exercise of Arms, all of which I love. This was a 17th-century step-by-step guide on how to handle your pike and your musket, which was an instant bestseller across Europe and was translated into several languages including English. Peter Bruegel is represented by several drawings, which alternate between beautifully detailed, naturalistic pen-and-ink landscapes, and bizarre allegorical scenes which seem to have escaped from one of Bosch’s nightmares, with vices shown in the forms of toads, bears and strange lizards. 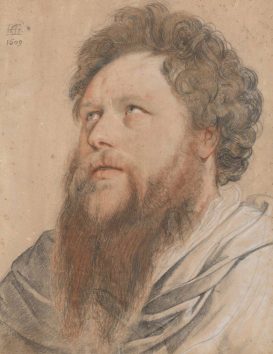 The exhibition will be moving to the Boijmans next and in 2015 it’ll also be shown at the National Gallery of Art in Washington DC. Do see it if you can. I was so impressed by it that I’ve been recommending it left, right and centre ever since I saw it. The catalogue, which is fortunately (for me) published in English, is of the good old-fashioned kind, with fine colour illustrations and notes for each and every drawing. Even though the authors explain that they’ve stripped back the details for a more general readership, there’s still enough provenance information and cataloguing to satisfy the drawings geeks among us. And yet the catalogue is no substitute for seeing the drawings in the flesh. When you’re standing in front of them, they genuinely take your breath away and that experience can never, never be replicated on the page of a book. Without doubt, one of the best drawings exhibitions I’ve seen.

If you still have any energy left after seeing the main exhibition, head downstairs to the basement where the Fondation are showing a wonderful little show called Dialogues. By pairing drawings from their collection with sheets from the Boijmans, they offer up some mouthwatering juxtapositions. I had considered writing about this show separately, but since so few of the images are available online, and since I’ve already subjected you all to quite enough superlatives for one day, I thought I’d just add a postscript here. As Dialogues isn’t restricted to the Dutch and Flemish theme of the show upstairs, there are drawings by Rubens and Rembrandt, but also Goya, Lorenzo di Credi, Carpaccio, Fra Bartolommeo and Pontormo, to name just a handful. ‘Haven’t had enough yet?’ the curators seem to be saying, with glee. ‘Right! Have some more fabulous drawings.’ Personal favourites included a portrait by Jan Cossiers showing his handsome teenage son; a fascinating profile portrait of a young man by a follower of Leonardo, which had been reworked by Rubens; and a charming study of a porcupine by Frans Snijders. When I eventually emerged back out onto the rive gauche, my head was spinning and I wobbled happily back off towards the centre, where I spent the rest of the evening enthusing wildly about both exhibitions to everyone I met. 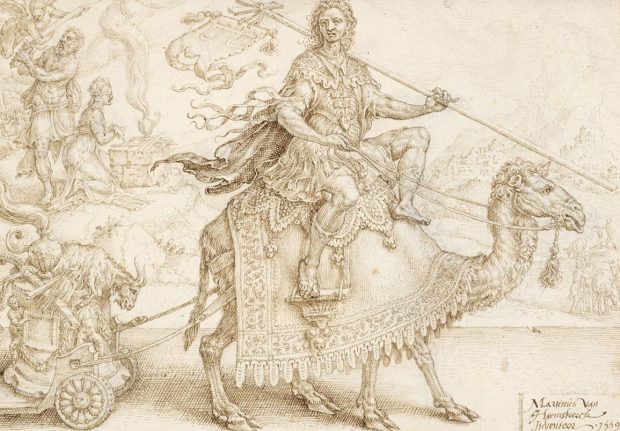