Bearing in mind I went to see the British Museum’s Vikings exhibition on the day after it opened, almost a month ago, you might think it strange that I haven’t got round to writing about it yet. The simple truth is that it’s been hard to weigh up my thoughts about it. And I’m not the only one who has mixed feelings. The lovely Elisa, a fellow Dunnetteer, came along with me and I think was similarly nonplussed; and I’ve spoken to several other people who’ve shared our feelings. In my particular case, I think I’d probably gone into the show with unrealistically high expectations.

After all, I’d been waiting for this for a long time: I bought my ticket back in the autumn and had ordered the catalogue well in advance, although I didn’t actually read it for fear of spoiling the surprise. It was, without a doubt, my most eagerly-anticipated show of the year. Unfortunately, it seems to have been eagerly anticipated by an awful lot of other people too. The greatest frustration about the exhibition was the overcrowding, which the British Museum’s shiny new galleries and timed-ticket entry did nothing to ease. And, while many of the exhibits are beautiful and breathtaking, the final much-hyped star piece wasn’t quite as magnificent as I was expecting. But more on that later.

The show is laid out by theme, beginning with an overview of the Viking world and the cultures they would have encountered, from the Hebrides to Byzantium, and then it proceeds to look more closely at trade, social status, lifestyle, shipbuilding, warfare and religion. There are plenty of artefacts from the British Museum’s own collection, of course, including the familiar dumpy figures of the Lewis Chessmen, and a selection from the Vale of York Hoard: a treasure-trove of hack-silver, coins and a golden cup, discovered in a Yorkshire field in 2009. Some of the most captivating exhibits in the opening rooms, in my opinion, are the pieces of jewellery, with their intricate decoration. I was especially amazed by the sheer weight of the elaborate brooches worn by wealthier women. Although I’d seen such brooches many times in books and paintings, I’d always imagined them flat and was astonished to see that many of them are actually heavy and hemispherical, encrusted with gold and gems. 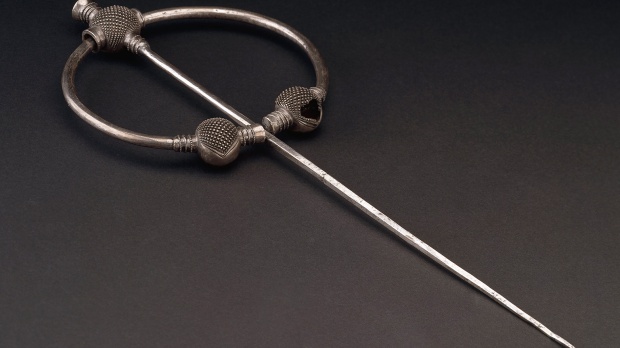 The men had their own fair share of unwieldy finery, in the form of magnificent brooches in which a silver ring is counterbalanced by a lethally long pin. If the brooch were fastening a cloak at the shoulder, some of these pins would project well above the collarbone and must have come in handy as an extra weapon in case of trouble, as well as showing off the wearer’s status.

There are, predictably, many examples of more conventional weaponry later in the show, where we see elaborate sword-hilts above corroded blades, a circular wooden shield which has managed to survive ten centuries, and fragments of helmets. One of the most interesting exhibits in that section, actually, was the skull of a warrior who’d indulged in the common practice of filing horizontal grooves into his teeth, which he would have painted, so as to appear particularly fearsome on the battlefield. And there are the sorry remains of an unsuccessful troop of warriors from a mass grave at Ridgeway Hill in Dorset, where the hapless Vikings were nastily massacred by the natives. Their bones now offer an insight into Viking nutrition and diseases.

While I was excited to see all these things, I wish I’d come away having learned a little more. Although the first room touches on Viking expansion out into Eastern Europe and Byzantium, it would have been interesting to hear more about their presence there, and the cultural cross-fertilisation. Much of the show also focuses overwhelmingly on warrior society. Now, I don’t mind that per se because it interests me; but I would have loved to learn more about the broader cultural setting, with its myths and skalds and sagas. And, as someone said to me yesterday, what about the loom weights? They may not have the glamour of swords and drinking horns, but they’re a typically Viking artefact and weaving was a key part of women’s duties: indeed it was the discovery of a loom weight out at L’Anse aux Meadows which confirmed the presence of Viking settlers there.

It’s probably appropriate to mention the exhibition book in this context. It’s an extremely good book, with wonderful photographs, in-depth essays and lots of glorious meaty detail which was missing from the show itself. But it is not a catalogue, and I think that needs to be made clear. Many of the things reproduced in the book are not in the show; more confusingly, for something being sold (at least implicitly) as an exhibition catalogue, many of the exhibits in the show are not illustrated in the book. While trying to refresh my memory for this post, I went through the list of exhibits in the back, and time after time I saw ‘Not illustrated’; ‘Not illustrated’. So you must be aware that you can’t necessarily revisit the exhibition afterwards from the comfort of your own home. What you can do, however, is read what seems to be a thorough and passionate set of articles about many different areas of Viking life and culture. I’m not enough of an expert to know whether these articles reflect the most up-to-date research on the subject, but the BM’s publications are usually of a very high standard.

All right: let’s get it over with. The ship. Roskilde 6: the centrepiece of the show and the focal point of much of the publicity. I knew just enough about Viking ships to have seen awe-inspiring photographs of the greatest surviving examples – the Gokstad Ship and the Oseberg Ship – which led me to expect a similar, almost complete vessel. What else could account for the amount of excitement in the press releases? Unfortunately I knew just too little about Viking ships to be aware what Roskilde 6 actually was. As Elisa and I rounded the corner to the final hall, my excitement threatened to bubble over: and was then swiftly doused. There was merely a modern metal skeleton shaped like a ship, with a few clinker-built timbers at the bottom and odd traces of a keel. Was this it?

In admitting this, I feel rather foolish, because I fully understand that from an archaeological perspective the discovery of Roskilde 6 was immensely exciting. Constructed on a considerably larger scale than most Viking vessels, it offers lots of new evidence about ship-building at that date. Half of me – the academic, serious, scholarly half – can appreciate that these timbers should make me excited. But unfortunately that half of me wasn’t dominant in the exhibition. It was the other half – the enthusiastic, wide-eyed, childish half – which had been impatiently waiting to see a proper Viking longship and which, faced with Roskilde 6, just felt a little bit sad.

Vikings is the inaugural show in the British Museum’s brand new exhibition wing. These galleries offer purpose-built facilities and, crucially, more light and space, enabling the Museum to display large objects that couldn’t have been shown in the Reading Room (where special exhibitions have been held for the last few years). While I agree that it would be nice to get the Reading Room back to its intended function, I always rather enjoyed seeing exhibitions in there. Approaching up a darkened ramp, it felt rather like entering the burial chamber in a pyramid: the promise of ‘wonderful things’ which, displayed in semi-darkness and carefully lit, glowed like jewels in their setting. Hadrian and Pompeii are just two of the shows that I felt worked incredibly well in this space.

The crowding was always a problem, it’s true, and that’s one thing that I imagined would have been tackled by the new purpose-built space; but as I said earlier it remains a problem. In the new galleries, just like in the old ones, people sweep into the first room and become piled up against the first row of cases. And, try as you might, there’s always some audio-guide listener who stands firmly in front of a case for minutes on end, blocking the view not only of the object but also the label displayed below. There just isn’t enough space for people to flow easily through the first part of the exhibition, although it’s true that things do ease off later. And the really funny thing is that I felt the show was smaller and barer than comparable exhibitions I saw in the Reading Room. Perhaps it’s just because the larger spaces, particularly in the final hall, made the exhibits feel small.

However, let’s not be too downhearted. There are many wonderful things worth seeing and, if you manage to visit at a less overcrowded time, you’ll probably be able to take your time and savour it all a bit more. Perhaps I’ll even go back when the initial rush has calmed down, and see if I get more out of it a second time. In any case, we’ll be back to exuberant gushing over the Vikings very soon on this blog, because I’m currently devouring Season 2 of the TV series, which is just as much fun as the first.

This post was written before I began working at the British Museum.

Part of the Vale of York Hoard