Following on in quick succession from The Dragon Keeper, we rejoin the dragons and keepers making the long, hard journey up the river in search of the elusive Elderling city of Kelsingra. As they get further from Casserick, leaving ‘civilisation’ behind them, it becomes increasingly clear that they have the freedom to break free of old social norms and create their own. But what shape that society should take, and how it should be regulated, and by whom, are questions that threaten to become fatally divisive.

Danger is no longer something posed only by the external forces of the acid river and the Rain Wilds’ strange climate, although nature certainly does continue to take its toll on this little group. Unknown to many of the company, there are traitors in their midst whose interest is not in protecting the dragons but in taking any opportunity to exploit them for monetary gain. And now there are new dangers in the shifting relationships within the group, as the young men size one another up and try to assert their dominance, and the girls find themselves on the receiving end of (mostly) unwanted attentions. These developments are reflected among the dragons themselves, as in the absence of any status quo they must find a way to establish their own hierarchy.

If anything, the central theme of this book is not change itself, but the prospect of change and how people deal with that. The change might be social change – as Greft seeks to win the keepers over to his vision of a new world – or a shift in the way two people relate to one another – for example, Thymara’s efforts to preserve her friendships as other elements enter into the mix – or, perhaps most obviously, physical change. One of the things I found most interesting is that we really start to understand more about the Elderlings: who and what they were, and how they were created. I don’t think it’s a spoiler to say that the process of becoming an Elderling involves relinquishing an entirely human form and taking on dragon aspects; but Hobb allows us to see a bit more of how the process can be controlled and directed, and how Rain Wild ‘disfigurements’ are not deformations at all but the thwarted early stages of a transformation into something much more fabulous and stunning.

On that subject, I’d noticed in the last book that certain dragon and keeper pairs were very similar in temperament – such as Rapskal and Heeby, or Greft and Kalo. At the time I wondered whether this was just coincidence, but it’s clear now that compatible personalities must have played some role in the match. I’m still not sure whether it was in fact the keepers who chose the dragons, or whether the dragons exerted some kind of subconscious pull on the most appropriate keeper. Their connections are only becoming more obvious now, of course, in the physical changes in the keepers which may or may not reflect the dragon’s own colouring but are nevertheless always chosen and directed by the dragon. Speaking of which: Sedric has changed, hasn’t he? I find him much more sympathetic now than I did, and certainly more interesting; although I have to confess I still don’t find him entirely convincing as a character.

The plot does make some progress, because in the final pages we’re certainly not where we were when we started; but my overwhelming impression is that there’s a lot of padding in the 500-odd pages. I had hoped for a little more action in this instalment, but apart from a couple of big scenes the main drama is provided by emotional angst. We change viewpoints fairly frequently, and it began to seem that every switch in narrator meant two or three pages of monologue about their guilty desires, or their worries over what another character thinks of them. Usually these are concerns which have already been expressed, at length, earlier in the book, and so it feels as if you have to keep retreading the same ground. While a touch of angst can add spice to the story, I started to wish that the characters would just stop vacillating and show a bit of decisiveness. As several of the characters discover by the end of the novel, taking the plunge generally does no harm (unless you’re Jerd) and cheers everyone up considerably (including the reader). I’m happy to report that I’m still enjoying the Erek and Detozi subplot, especially because I’d assumed all along – as I suspect I was meant to – that Detozi was a man, and was rather tickled to discover that I was wrong.

And so the future now looks much brighter for our little band of travellers; a fresh generation of Elderlings are poised to return to the world; the villains have had their comeuppance; and we look set to celebrate our first bird-keeper wedding. However, I doubt very much that all is going to be sweetness and light from here on. That new society has to be built, for a start; and even though Trehaug is glad to see the back of its young exiles, there are members of the party who can’t so easily be set aside. We know from Erek and Detozi that Alise’s and Sedric’s families are growing increasingly worried about their well-being, and I can’t see Hest being the kind of man to let two people slip away from under his thumb without doing something about it. If this new society is to be viable, it will have to interact with the outside world; and that’s when things are likely to get very interesting. I’m intrigued to see how things go from here – and of course I’m keeping my eyes peeled for those other cameo appearances Heloise told me about.

Despite approaching this series with an open mind, I have to say that at this midway stage I find myself in agreement with the general tenor of the reviews I’ve read. Although the series is still well-written and enjoyable, it doesn’t have the depth or emotional conviction or narrative force of Hobb’s other books. She set herself a very high standard with her earlier trilogies and, for the moment at least, there’s still a fair way to go before I find myself caring as passionately about these characters and their travails as I do about some of Hobb’s others.

Last in this series: The Dragon Keeper

Next in this series: City of Dragons

And now it’s time for the Cover Feature once again. Heloise has reassured me that the red-cloaked man theme will continue in the German editions, so we can all breathe a sigh of relief and plunge in with gusto. First up, as always, the American edition: it’s dramatic and eye-catching and, to my delight, backs up my mental image of Tarman as a kind of ancient trireme. Minus points, though, for showing three dragons swooping around in the skies, when only one is fully airborne in the book, at least until the very final lines. The Dutch cover, displaying a slight lack of imagination, has done little except change the colour of the shrubbery to red (I am now taking bets as to which colour it will be for the next book). And then, triumphantly, we turn to the German edition, which LibraryThing assures me is the correct cover for this novel, but which has translated the title to ‘Dragon Hunter’ which doesn’t quite seem to fit… Nevertheless, we once again have a mysterious-looking chap in a red hooded cloak with a sword. If nothing else one has to admire the artist’s ingenuity for managing to conceive so many different variations on the same theme. 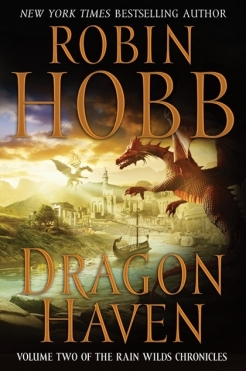