And so, at long last, Kelsingra has been found. In this third book of the series, the dragons and their keepers have finally made their way back to the fabled, half-remembered city which features in so many of the dragons’ ancestral memories and which promises, in some as-yet undefined way, to heal and transform them. Faced with rolling hills and woods and solid ground, the like of which they have never seen before, the human members of the expedition rapidly come to understand that this is a place that could make a good home. But there is much to do.

Crucially, the fast-flowing river and the ruined quays of Kelsingra mean that most of the party are stranded on the wrong side of the water, condemned to stare at the abandoned city from afar but unable to reach it. Of the dragons, only Heeby can fly with any success, while the others nurse their sense of injury and rely more and more heavily on their human keepers. For their part, the keepers are no longer able to find enough game to satisfy the dragons and it is increasingly clear that something has to change. On the far bank of the river, Kelsingra promises to restore the dragons’ strength and unfold the history of the Elderlings: all they have to do is reach it.

While Thymara and Rapskal explore the ruins and delve deeper into the Elderlings’ memories and histories, Alise charts the city in a different way. Unlike the others, she cherishes the city for its preservation, not its potential, and she knows only too well that their unchallenged possession of Kelsingra can’t last. Fearing the inevitable tides of treasure-hunters, traders and explorers from Bingtown and the Rain Wilds, she struggles to piece together what she can of this strange and mystical place, before it is transformed forever by the innocent blundering of her young companions. And time is running out for Alise in other ways as well. Back in Bingtown, her estranged husband Hest finds himself faced with an offer he can’t refuse, and begins to contemplate how he can serve the ailing Duke of Chalced by providing dragon parts to cure his mortal illness. And, when Leftrin heads back to Trehaug to claim the expenses of their expedition, he finds himself walking into a world where no one can be trusted, and even the Elderlings themselves are at risk.

I enjoyed this instalment more than Dragon Haven, partly because I’ve always enjoyed exploring Hobb’s Elderling cities, with their ghostly music, their laughter and glimpses of ancient life. Once again Alise’s experience touches a chord with me, primarily because she reacts to her situation in a way that I’ve never seen with any other fantasy character. Usually, when characters discover an ancient ruined city in a fantasy novel, they explore in wonder, break down doors, try to fathom out who could have built such a thing, and carry off souvenirs (which invariably prove to have marvellous powers). Alise is the first character I’ve seen who, faced with the remnants of an ancient civilisation, rolls up her sleeves and demands that everything should be recorded methodically in its place – exactly like an archaeologist trying to preserve the integrity of the layers of a dig. I’m rather touched by her determination: of course it’s pedantic; and of course she’ll be doomed to failure, because a methodical excavation would make for a rather dull fantasy novel; but I sympathise with her nevertheless.

Her explorations also offered one of the novel’s little moments of delight, when she makes her way to the top of Kelsingra’s map tower, only to find that someone else has been there before her… a lovely little in-joke for those of us suffering Farseer withdrawal symptoms. It’s through Alise that Hobb makes the reader think a little harder about what happens to these ancient cities after their breathless rediscovery by the heroes. She raises the prospect of looters, hangers-on and plagues of tourists: Kelsingra is essentially a fantasy version of Pompeii, poised for the influx of fascinated visitors that might well end up destroying it. Of course, these people would be making the same mistake about Kelsingra that Alise is labouring under: thinking it’s a dead place to be plundered; whereas in fact it’s very much alive and is just waiting for the right stimulus to resurrect its faded glories. (And I’m looking forward to seeing that happen.)

The story feels more energised and dramatic in this instalment, although the book is quite noticeably split into two halves: a first half which is still defined by the characters worrying about how they feel and what people think, which is close in spirit to Dragon Haven; and then a second half where suddenly the story gets an extra charge. The cogs and gears of the plot suddenly start spinning as various storylines switch onto the tracks that are going to bring them together in (I presume) dramatic collision in the final book. Suddenly it becomes clear that the discovery of Kelsingra doesn’t just affect the dragons, or their semi-Elderling keepers. It’s also going to have an effect, positive or otherwise, on many other characters – whether that’s Hest, who finds himself held to account for Sedric’s failure to provide the promised dragon flesh; or Malta and Reyn Khuprus, who are increasingly endangered and isolated in Casserick. Their status as Elderlings no longer awes people as it once did, and in some circles people are beginning to talk about the Duke of Chalced’s desire for dragon flesh, and wondering how different an Elderling really is from a dragon after all. (This is a question which is also becoming rapidly more urgent for Selden Vestrit, whom I’m pleased to see back in the story, even if I had hoped to see him again in happier circumstances.)

With their sudden influx of drama, the final chapters left me feeling much more positive about this book as a whole and I’m now keen to embark on the fourth and final instalment in the series. It’s as if someone, somewhere has flicked a switch and the series has sparked into life. As Malta and Reyn, the Casserick bounty-hunters, Tintaglia and IceFyre, and the determined Hest all converge on the little settlement at Kelsingra, the dragons and keepers will surely find themselves having to adjust in some way. I imagine that Tintaglia’s return is going to put the cat among the pigeons, so to speak, because I can’t see her allowing any challenges to her status as queen; and Hest’s arrival is going to be similarly disruptive, as I can’t see his reunions with Alise and Sedric being particularly joyful. Unfortunately for Hest, I don’t think he has any idea what he’s letting himself in for. I’m going to enjoy watching him find out.

Last in this series: Dragon Haven

Next in this series: Blood of Dragons

And here, dear reader, I find myself bereft, because I had hoped to continue my Cover Feature… but what is this? The German publishers haven’t yet got round to the final two books in the series! No more red-cloaked men in brooding poses for us. And in fact the range of covers for this instalment is fairly unimaginative. The American and British covers are just the same design in different colourways, and the Dutch dragon has now moved to hide in a yellow shrub but is otherwise identical. Alas. Fortunately the new British edition is a little more creative. 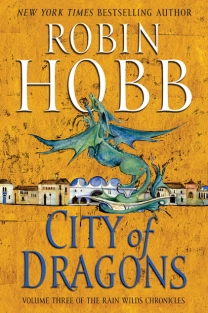 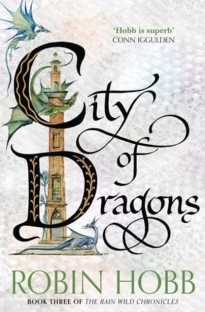 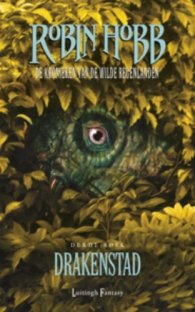