This is the third production I’ve seen by Iris Theatre, and they never fail to delight. While in previous years I’ve seen them perform light, summery romantic comedies (A Midsummer Night’s Dream and As You Like It), this was my chance to see them tackle something in a darker key. It’s a very topical choice of play, of course: debate is still raging over whether or not the remains discovered in Leicester last year are indeed those of Richard III. I was intrigued to see what Iris, and their director Daniel Winder, would make of the king.

Would he be a wicked schemer or Machiavellian opportunist? Would he be crushed and disillusioned by his family’s scorn, or inherently evil? Twisted in mind, body or both? In last year‘s Globe production, for example, Richard was childishly petulant rather than malevolent: dangerous not for his subtlety but for his unpredictability. That was an interesting take on the role but not one I really warmed to: I longed for more of Richard’s panache. Fortunately Winder and his cast provide this in spades. Their Richard is the classic Shakespearean villain: a hunchback with a twisted leg and a limp, and a withered arm. But he is also the most charming and beguiling Richard I’ve seen to date.

David Hywel Baynes, whom I last saw as an efferverscent Puck in A Midsummer Night’s Dream, turns in a masterly performance. His Richard starts out as a confiding, impish fellow who is almost overcome by his own cleverness and who wants to share that glee with the audience. As he realises what he can get away with, he carries us along with him; we know that what he’s doing is evil, but his humour and openness (to us) make us will him on to success. That makes his psychological disintegration in the second act even more shocking, as the boyish meddling turns into the homicidal fury of a man desperate to cement his position. But it also means that, by the final scenes, we are able to feel real pity for this Richard. He deserves all he gets; but, because he’s won us over and made us laugh, even as he’s shocked us, we can’t watch his fall unmoved. And, rather than finishing on the high note of Richmond’s triumph, this production continues for a moment longer, returning the focus to Richard’s broken body amid a haunting Miserere. It willingly shows us Richard the villain but, unlike the other productions I’ve seen, it also shows us Richard the victim.

The midwife wonder’d, and the women cried
‘O! Jesus bless us, he is born with teeth.’
And so I was; which plainly signified
That I should snarl and bite and play the dog.
Then, since the heavens have shap’d my body so,
Let hell make crook’d my mind to answer it.

That’s partly the result of a very clever opening to the play. Iris do something which I haven’t seen before: rather than plunge straight into the ‘winter of discontent’ speech, they begin with a scene from the end of Henry VI: Part 3, which helps to set the scene. By starting with the Battle of Tewkesbury, with the clash of steel and the death of Henry VI’s son Edward at the hands of York, Clarence and Gloucester, we see that the rest of the play unfolds as a result of that murder. It makes it clear that the deaths and the fragmentation of the realm aren’t the result of one man’s machinations, but the price exacted by Fate from Edward IV and his brothers for their usurpation of their anointed king. (It’s like Richard II and Henry IV all over again, with the usurpers doomed to expiate their sins, before a pure young king enters in the final act to set things right.) Moreover, such an approach changes the entire dramatic thrust of the play and gives much more significance to the figure of Queen Margaret (played by Mark Hawkins).

The Duke of Buckingham (Nick Howard-Brown)

In other productions I’ve found Margaret rather tedious and, when the Globe’s version cut her out completely, I didn’t think the play suffered for it. But Iris’s decision to put Richard III in context makes the play part of something bigger and so Margaret becomes more important: a foil and counterpart to Richard, one grotesque against another. Her first appearance is at Tewkesbury, as a bona fide virago leading her men in battle with sword in hand. Later she slithers into the complacent York court, a chilling, prophetic figure with dishevelled auburn hair and one wild, staring white eye. Hawkins’s performance is riveting. He conveys the full force of Margaret’s anguish over her dead son and husband, which drives her into madness and curses and a thirst for vengeance.

And, what’s more, Iris adds one final particularly clever twist: Hawkins plays both Margaret and Richmond. In this way Margaret’s triumph over the murderers of her son is personified in the noble figure of the future Henry VII. Very smart. (Hawkins also plays the Archbishop of York, and it wasn’t until I read the programme afterwards that I realised he was also Catesby, who in this version becomes Richard’s amoral sell-sword, the go-to man for murdering Clarence and the children. All in all, it was something of a tour de force. Someone give that man a clap on the back.)

The rest of the cast divide up the roles between them and are uniformly impressive, slipping from persona to persona. I would love to go through everyone name by name, but we’d be here all day, so I’m going to stick to two other actors who particularly caught my eye. One moment Anne-Marie Piazza is the slaughtered Prince Edward of Lancaster; the next she’s a naive Lady Anne, her initial vehemence fading into confused acquiescence in the face of Richard’s repeated avowals of his love; and then in the next scene she turns up in the form of the future Edward V, all boyish self-importance and gaucheness. But perhaps the most wonderful transformation was Dafydd Gwyn Howells from the sainted King Henry VI (effectively a cameo, as he was slaughtered fairly swiftly) into a stiff, smug Earl Rivers, and then into a monumental and deliciously camp Duchess of York.

But it’s very much an ensemble success, so bravo to all. It’s a show full of exuberance and flair, and I always love the promenade aspect, which means that the actors move among you and hurry you on from place to place: nowhere else do you have quite the same sensation of being part of the play. If you’re in Covent Garden before 25 July with an evening to spare, do try to get to see this. You won’t be disappointed. And if you can’t make it by then, don’t despair. Iris are putting on Alice through the Looking Glass from 30 July until 30 August. With their particular brand of magic, that should be equally unmissable. 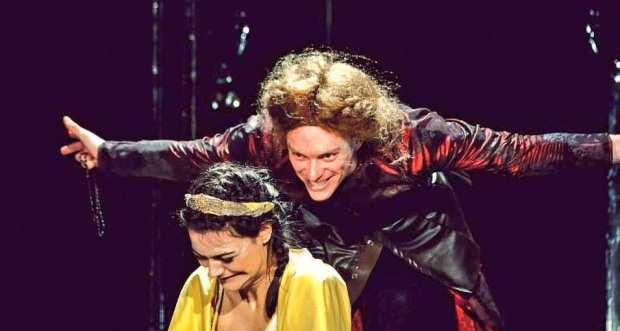 This probably counts as a spoiler, so if you’re planning to see the show please don’t read on because it’ll be much more effective if you don’t. But to those who won’t get to see it (many of you, probably) I wanted to flag the staggering ending. As with the other two Iris productions I’ve seen, the performance ends within the church, which this time has been transformed into a throne room. In the aftermath of the Battle of Bosworth you go in, to find dry ice hazing the air. At first all you see is Richard on the throne. Then you realise he’s not seated on the throne, but impaled through his stomach on a lance rising out of the throne – pinned in mid-air, limbs hanging, as if he really were a spider finally caught on an etymologist’s pin. It was a shocking and hugely powerful ending. I wasn’t the only person who clapped my hands over my mouth when I realised what I was seeing.

A small aside. Surely it’s no coincidence that the throne bore a striking similarity to the Iron Throne of Westeros? The Wars of the Roses famously served as a source for Game of Thrones, but during the interval I found myself thinking that the series’s popularity could also give audiences a new and more sympathetic attitude to Richard. After all, in that series we’re used to rooting for a man of acute intelligence who’s mocked by those around him, simply because he’s had the misfortune to be born with physical differences that make him a monster in other people’s eyes. The key difference with Richard III, of course, is that ultimately Richard also becomes a monster to himself:

My conscience hath a thousand several tongues,
And every tongue brings in a several tale,
And every tale condemns me for a villain.
… I shall despair. There is no creature loves me;
And if I die, no soul will pity me:
Nay, wherefore should they, since that I myself
Find in myself no pity to myself?