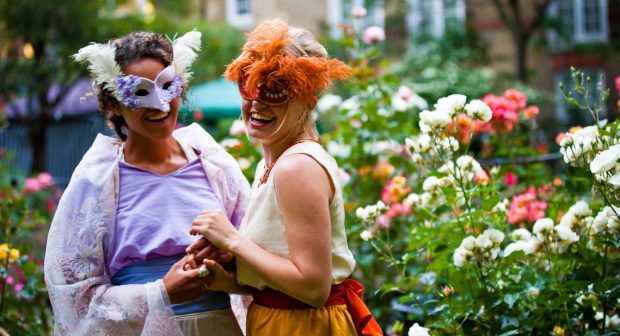 Summer has come to London (although the British weather hasn’t had the memo). These long, light evenings are the cue for the ever-wonderful Iris Theatre to roll out the red carpet for another of their outdoor Shakespeare plays, performed as promenade productions in and around the Actors’ Church in Covent Garden. This year’s show is Much Ado, probably my favourite play, and as a longstanding fan of the company I just couldn’t resist. Moreover, the play has already enjoyed critical acclaim, with four nominations for the Off West End Awards. It was bound to be a good night out so I marshalled my visiting parents and we set off for an evening of Iris’s very special brand of magic.

This is the fourth production of Much Ado that I’ve written about on this blog, so I probably don’t need to go into deep detail about the plot. If you would like a more thorough synopsis, take a look at my post on the Old Vic’s version that I saw back in 2013. Suffice it to say that, as the army of Don Pedro of Aragon rests from their recent campaign at the Sicilian villa of his friend Leonato, love is in the air. Two couples take the stage: sweet, lovestuck Claudio and Hero, who have eyes only for each other, and squabbling, wit-cracker rivals Beatrice and Benedick, whose every encounter strikes sparks. In the languid summer days leading up to the wedding of Claudio and Hero, Don Pedro decides to entertain the company with a great enterprise: to trick Beatrice and Benedick into falling in love with one another. As the prince and his friends play the part of Cupid, Don Pedro’s illegitimate brother Don John schemes in the shadows, determined to find any way he can to spoil his hated brother’s merriment. And he has lighted upon just the thing: a foolproof plan to ruin the perfect match between Claudio and Hero.

Iris Theatre always manage to bring a comic verve to their shows, even when the material isn’t a comedy per se – I remember their wonderfully engaging Richard III, in which the king wormed his way into the affections of the audience by making us laugh. But they are at their best with unbridled, joyful plays, full of farce or gender confusion. Their As You Like It and Midsummer Night’s Dream were heavenly, and Much Ado, directed with a sure touch by Amy Draper, continues in the same vein. Pathos isn’t set aside – the scene of Hero’s repudiation by Claudio was as painful and heartfelt as any I’ve seen – but you can feel that the company really enjoys the playful moments of Beatrice sparring with Benedick, or the eavesdropping scenes in which the reluctant lovers are convinced of the other’s passion. As ever, the cast not only act but also provide musical interludes for songs, or to cover the audience’s well-mannered stampede from one part of the garden to another.

I’m always happy to re-encounter actors I’ve seen before, and there were two familiar faces in this Much Ado. Happily, they were our bickering protagonists. Beatrice was played by Anne-Marie Piazza, who doubled up as a short-lived Prince Edward and an elegant Lady Anne in Richard III. Neither of those offered her much chance to display her comic vigour, but I also saw her as a vibrant Maria in last year’s Twelfth Night (which I didn’t write about, I’m sorry to say). Given centre-stage as Beatrice, she was a delight: waspish, playful and exuberant but with a palpable vulnerability.

Her quick-fire exchanges with Benedick (Nick Howard-Brown) were wonderful, but I was most impressed by how she switched from comedy to tragedy and back again. She was hugely powerful in the scene after Hero’s repudiation, when Benedick finds Beatrice weeping and she allows all her scorn and injury to pour out. It’s one of the moments when Shakespeare writes women most perceptively: that acknowledgement of custom even while struggling against it, and the simmering, choking awareness of injustice. Piazza’s Beatrice almost howls with the unfairness of it all. And yet, moments after this affecting scene, Piazza had swapped clothes and was bumbling around as the goofy policeman Verges. She’s also a mean hand on the accordion. Beatrice is my favourite character anyway but, even if she weren’t, I think Piazza would have lit up the play for me the moment she came on.

This Beatrice had stout back-up in the form of Howard-Brown’s Benedick. Lanky and twinkling, with a hipsterish air and a deft way with a violin, Howard-Brown is an instantly appealing actor and his expressive features are perfect for comedy. I’ve seen him twice before as well, as Buckingham in Richard III and as Feste in Twelfth Night, and in the latter role he proved to have a madcap exuberance. Here he coupled that liveliness with wit and warmth: his Benedick is used to being the troop’s comedian, but at the first hint that Beatrice might love him, his scorn melts like snow before the sun. He was one of the more gentle Benedicks I’ve seen, ripe to be tamed into marriage. His physical comedy was great too, especially in the eavesdropping scene, as he attempted to cram his long limbs behind a tree or, in one instance, hauled himself up into the ‘rafters’ to evade detection. Between them, he and Piazza ensured that our favourite squabbling lovers held the limelight.

That doesn’t imply any criticism of the rest of the cast, who in true Iris fashion frequently had to double, triple or even quadruple up their roles. Emma McDonald managed the impressive feat of making Hero gentle and modest without making her irritatingly bland (a frequent problem in other productions), and delivered her lines in a gorgeously deep, rich voice; yet, while playing the pompous Dogberry, she was all swagger and strut. The contrast was wonderful. Her Claudio was Graeme Dalling, managing to be romantic without sacrificing the odd flashes of spirit that show us Claudio’s worth as a soldier. He continued another Iris tradition of involving the audience, while waiting for everyone to arrive and get settled for one scene, by wandering around trying out sonnets on unsuspecting women in the audience, and he was wonderfully natural throughout. Denis Delahunt had the mildly less rewarding role of Leonato, although he gave the landowner an impressive poise and presence, while Darrel Bailey proved to be an unexpectedly jovial and mischievous Don Pedro. The final member of the cast, bravely taking on four different roles and doing very well in all of them, was Jennifer Clement, whose garrulous (and sweet singing-voiced) Margaret was a far cry from her stiff and taciturn Don John. This – Don John – is a role that I often have trouble with, and I did find him a little staid here, but Clement livened him up with the odd villainous smile and scheming frown.

Going to see an Iris Theatre production is always a pleasure, and this time too I came away brimming over with happiness. My parents, who’d heard much gushing about the plays of previous years, adored the whole experience, even when subjected to my bossy strategic seat-choosing so that we’d be sure to get a good place in the next part of the promenade. Merry, light-spirited and performed with whole-hearted gusto by the cast, it was another resounding success for this brilliant young company.

Later in the summer, Iris will be turning their eyes to horizons even more distant than those of Shakespearean Sicily, as they embark on their second promenade production of the year: Treasure Island. Being unable to resist pirates at the best of times, it’s almost certain I shall go, and I look forward to reporting back on how the two shows compare.