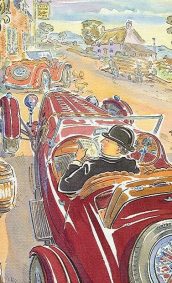 It’s extraordinary that it took me this long to get round to Jeeves and Wooster, partly because it’s exactly the kind of silly English humour that I like, and partly because I spent three very happy years eating strawberries, drinking champagne and falling out of punts at Bertie Wooster’s alma mater. I suppose I should really have been methodical and started with the first Jeeves collection, but someone donated Jeeves in the Offing (1960) to the book stall at the village fete this year, so it seemed a good place to begin.

When his butler Jeeves heads off for his annual holiday at the seaside, Bertie Wooster is invited down to stay with his Aunt Dahlia at Brinkley Court, Market Snodsbury, near Droitwich, Worcestershire. Little does he know the complexity of the intrigue into which he will be drawn. He finds himself under the same roof as his fearsome prep-school headmaster Aubrey Upjohn, whose stepdaughter Phyllis Mills is goddaughter to Aunt Dahlia. Also staying at Brinkley is Mrs Cream, the crime-novel-writing wife of an American tycoon who is being courted for a business deal by Aunt Dahlia’s husband Tom. She’s accompanied by her son Willie Cream, who has taken an immediate shine to Phyllis, but who cannot be allowed to get himself engaged to her, on account of having a reputation in the New York papers as an irredeemable playboy.

Bertie’s job is to act as an obstacle to the flowering of romance between Willie Cream and Phyllis Mills, which in practice means chasing after them in order to opportunely interrupt quiet poetry-readings in leafy glades. He is helped (or hindered) in this by his former squeeze Roberta Wickham, a red-headed liability whose very presence fills Bertie with well-advised fear:

While equipped with eyes like twin stars, hair ruddier than the cherry, oomph, espièglerie and all the fixings, B. Wickham had also the disposition and general outlook on life of a ticking bomb.

Indeed, Bobbie (as she’s called) gets things off to a splendid start by announcing to Bertie that she’s placed a notice of their own engagement in The Times. Her plan is to terrify her mother so much that she’ll readily agree to accept Bobbie’s real beloved, who is Bertie’s old schoolfriend Reginald ‘Kipper’ Herring (‘an unsafe entrant to have backed in a beauty contest, even if the only other competitors had been Boris Karloff, King Kong and Oofy Prosser of the Drones’). The cast is rounded out by the eminent brain specialist Sir Roderick Glossop, who has come to Brinkley incognito, pretending to be a butler named Swordfish. He aims to detect some signs of neurosis in Willie Cream that will back up Aunt Dahlia’s desire to squash the match between him and Phyllis.

It is no surprise that the situation should deteriorate into a tangled mess that only Jeeves is capable of ironing out. Oh; and, just in case we needed added twists and turns, in a plot that would already have had most opera librettists reaching for the smelling salts, there’s an antique silver cow-creamer at stake, and a dachshund which specialises in tearing up viciously to people, teeth bared:

He wouldn’t hurt a fly, but he has to put up a front because his name’s Poppet. One can readily appreciate that when a dog hears himself addressed day in and day out as Poppet, he feels he must throw his weight about. His self-respect demands it.

Wodehouse has an absolutely glorious turn of phrase. Next time my parents call me, I’m itching to answer the phone with, ‘A very hearty pip-pip to you, old ancestor‘. I have to be careful, though: last time I answered the phone in an amusing fashion, it turned out to be my great aunt on the other end. It was, in fact, a somewhat Woosterish situation. There are also some masterful put-downs, such as Aunt Dahlia’s damning verdict on poor Phyllis: ‘I always thought her half-baked, but now I think they didn’t even put her in the oven‘. Wodehouse’s sprightly prose blends chatty London slang with fragmentary quotes from Shakespeare and the Bible: the overall impression isn’t so much that Bertie is completely dim, but just that the wires aren’t all connected in quite the right order.

The story barrels along with vim and vigour and people falling into lakes, which all comes together into a winning confection of delicious silliness. Ideally I should have read this while stretched out on the lawn with a glass of Pimm’s at my elbow, but at least I can now get some of the other stories lined up ready for a concerted attack next summer. I even learned a new word, ‘espièglerie’, meaning ‘the quality of being roguish or frolicsome’, which naturally I’m now determined to get into a conversation as soon as possible.

So there we are. It’s probably not a huge surprise that I enjoyed this so much; and I’m very much open to suggestions of which in the series I should read next. I presume they don’t really have to be read in order? And presumably, if I’m going to do this properly, I should also seek out the TV series, which I have also, shamefully, never seen.