How do I begin to describe Elena? It definitely isn’t your average opera. Imagine a Baroque cross-dressing operatic romantic comedy, with importunate lovers (plenty), pirates (sort of) and bears (briefly). How can you refuse something so gloriously over-the-top? Performed with gusto by a brilliant young cast, many of whom have since made names for themselves all over Europe, this charming, rambunctious, occasionally downright daft production from the Aix Festival is in a genre all by itself.

This promised to be the perfect tonic after the fireworks of the Wigmore Hall on Sunday and I was thoroughly looking forward to it for several reasons. It would be disingenuous to pretend that the casting didn’t have something to do with it: as you all know by now, I’m rather fond of the countertenors of Team Artaserse. But I’m also fascinated by the Trojan War myth cycle, and I’ve come across Helen of Troyin several different fictional forms, so was interested to see how she’d translate to opera. You might remember that Heloise and I recently did a joint reading of Mary Renault’s excellent Theseus novel, The King Must Die, so I was tickled by the thought of juxtaposing that with the opera as well. From a more academic standpoint, I really wanted to see something by Cavalli. Earlier this summer I was studying some costume drawings for his opera Hipermestra, which was performed in Florence in 1658, a year before Elena had its première in Venice, so I was keen to get a flavour of his musical style. And, the more I read about this production of Elena, the more fun it sounded: so in the end I simply took the plunge. 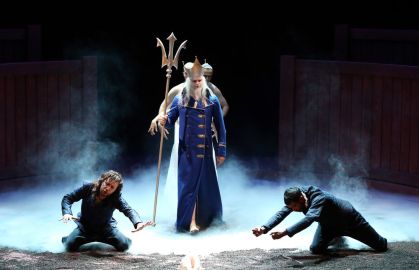 Theseus and his friend Pirithous are the terrors of the Aegean, marauding from port to port in search of loot, adventure and women. With the assistance of Theseus’ father Neptune, they make their way to Sparta with the intention of kidnapping the beautiful Helen, supposed daughter of the king Tyndareus (her father is actually Zeus, who seduced her mother Leda in the form of a swan). Knowing that Helen is still little more than a girl, and fonder of games than suitors, they creep up to the palace gymnasium, hoping to catch her off her guard. The gamble pays off: they discover her wrestling with her new companion, an Amazon named Elisa. Theseus has his eye on Helen, while Pirithous is immediately ravished by Elisa’s beauty and sets his sights on her. Snatching their prizes, the two rogues gleefully carry the women off to sanctuary at the court of their ally Creon, and begin their attempts to win their hearts. All seems to have gone swimmingly.

There’s just one problem. ‘Elisa’ is in fact not a nubile Amazon, but the lovesick prince Menelaus, who has disguised himself as a girl in order to get close to his beloved Helen. His trusted servant Diomedes is the only one in on the secret: Helen is taken in by his disguise, as is poor Tyndareus, who falls helplessly in love with ‘Elisa’ on first sight. But what started out as an amusing jape starts to get rather serious. Condemned to hold his tongue, in order to stay close to the object of his desire, the tormented Menelaus has to watch Helen softening in the face of Theseus’ brazen charm. And as if that wasn’t bad enough, he has to keep fending off the ardent Pirithous, who simply won’t take no for an answer. Things aren’t looking up. However, things aren’t looking all that good for Theseus either. Shortly after he arrives at Creon’s court, his estranged lover Hippolyta (queen of the Amazons) turns up in pursuit, hoping to persuade him to come home. Oh, and Creon’s son Menestheus has conceived an instant passion for Helen and, seeing Theseus as the one thing that stands in his way, is determined to murder him. 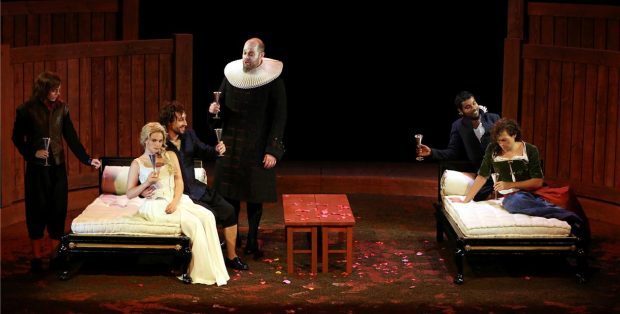 Musically, this is a world away from the grand arias of opera seria and I spotted the same motifs and patterns that I’d already heard in Monteverdi and Landi. But it differs from Poppea or Sant’ Alessio in its boisterous exuberance: while the latter was an improving oratorio created for clerical circles in Rome, this is a lively piece of fizz cooked up to entertain Venetians in the depths of winter. The elevated elegance of Hasse or Vinci is nowhere to be found: Elena is infused instead with a good-humoured Shakespearean earthiness, where every scene is delivered with brio and a sidelong wink at the audience. Indeed, I found it easiest to think of it not as an opera but as an anarchic comedy that just happened to be sung rather than spoken. Like Twelfth Night, it playfully riffs on the theme of gender confusion, with people falling inappropriately in love all over the place. More modern parallels are hard to ignore as well: I read a review in which the opera was likened to a Baroque Some Like It Hot, which is very true.

It’s not all farcical comedy, though: the cheerful manic energy is balanced by some more introspective and moving scenes. Menelaus has a plaintive aria lamenting Helen’s growing warmth towards Theseus and his own helplessness; while Hippolyta spirals into misery when she learns that her beloved Theseus has been unfaithful to her. It’s a tribute to the young and talented cast that they can carry you with them across the divides between comedy and drama. I want to mention just a few of them here.

Solenn’ Lavanant Linke makes a wonderful Hippolyta: noble, loyal and proud, she’s probably the only character who stands aloof from the chaos. She manages to convey the swagger of an experienced warrior, coupled with the pain of an unrequited love. The errant Theseus is played by the tenor Fernando Guimarãres, who slips easily from misogynistic bravado to wheedling charm, while the countertenor Rodrigo Ferreira takes on the role of the unfortunate Pirithous. I couldn’t quite make up my mind about him: I thought he had great flair as a physical actor, and he managed to make Pirithous sympathetic even though he is a figure of fun; but I felt that his voice was slightly overshadowed by those of the other two countertenors in the cast (and I was distracted by his tendency to look up to heaven while singing).

As the buffoon Irus, Emiliano Gonzalez Toro pulls out all the stops for a performance of manic energy and absurdity, offering some welcome relief in between the scenes of romantic misunderstandings and heartfelt suffering. In the hands of a brooding Anna Reinhold, Menestheus has the the air of a Jacobean malcontent on the run from a John Webster tragedy, skulking at the edges of the stage, waiting to strike. Two other voices that particularly impressed me were those of Mariana Flores and Christopher Lowrey, each of whom took several different roles: Flores’s soprano is full of personality, while Lowrey’s countertenor was strikingly clear and well-controlled. He’s been added to my list.

As for Helen: well; I always feel a bit sorry for anyone who’s cast as Helen of Troy. Playing the most beautiful woman of all time must add a tiny amount of pressure; but Emöke Baráth is pretty near perfect. She’s got the looks all right, along with a rich, lovely voice; but she also manages to make Helen feel real, tempering her naivete with growing self-awareness. (I wondered whether this was reflected in her change, halfway through, from a pure white dress to a more seductive crimson silk gown).

Turning now to Menelaus… Well; I’ve talked about Valer Sabadus’s lovely voice before, but this was my first chance to see him get his teeth into some proper acting (rather than simply casting longing looks across the stage). When he first appeared in doublet and breeches, clean-shaven with a wig of tumbling hair, I hardly recognised him. Ironically he had an androgynous quality even when dressed as a man, which of course works terribly well here: we only make it halfway through his first scene before he’s stripped off his doublet in favour of a look I can only describe as ‘Persian harem-dancer’. 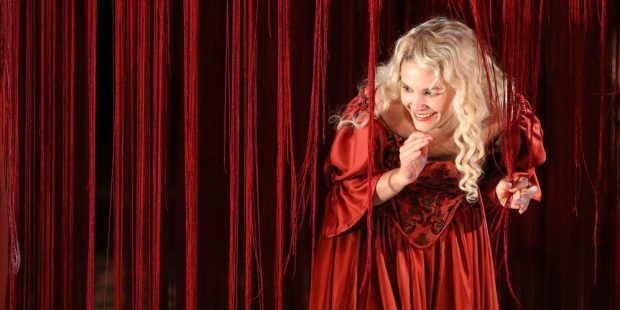 To my delight, he turned out to have a gift for comic acting: he’s especially good at conveying various degrees of wide-eyed alarm. He particularly seemed to be enjoying himself in the final scene, where Menelaus reveals his identity to the flabbergasted Pirithous. But he was also good at lovelorn angst (if Theseus is the kind of alpha male who’ll throw you over his shoulder and carry you off, Menelaus is the type who’ll languish under your window wearing black and reciting sonnets). I’ve swiftly come to realise that convincing romance is a bit of a rarity in Baroque opera, but Barna-Sabadus and Baráth are wonderful together. They have real chemistry and their love feels raw, thrilling and all-consuming. During their duet in Act III, their eyes are locked, their body language perfectly judged to suggest the clumsy innocence of a first, intoxicating passion.

I had to put aside my usual pedantry about historical costume, because the cast were dressed in a gleeful miscellany of styles (and that’s even without mentioning the silken dressing gowns and absurd wigs of the prologue). Jacobean doublets rubbed shoulders with Rembrandtesque ruffs, an early 18th-century frock coat and military-style jackets. The overall effect was of a group of eager children who’d rampaged through a dressing-up box, but to my surprise it actually worked. The extravagance of the outfits is contrasted by a very simple set, so the eyes aren’t overwhelmed – and the whole production is so deliciously tongue-in-cheek that the irreverent approach is very successful.

Finally, a word about the DVD itself. I was a bit taken aback to order a DVD and receive a small hardback book, but it turns out that the discs are slipped inside the front and back covers. The book contains interviews and plot summaries in French, English and German, though sadly there isn’t a libretto (which, seeing an actual book, I had been hoping for). But the book is beautifully produced and includes some of the watercolour costume designs, which are rather fun. It’s an original and quirky form of presentation: absolutely appropriate for this production.

So now, tell me: are all of Cavalli’s operas so riotous? Friends have recommended his Giasone and Ormindo, and I see there’s a clip of a Hipermestra production on YouTube, but I’d love to know about other gems. Filmed versions are preferred, simply because I’m a visual person and like to watch as well as listen; but I know there aren’t all that many yet. 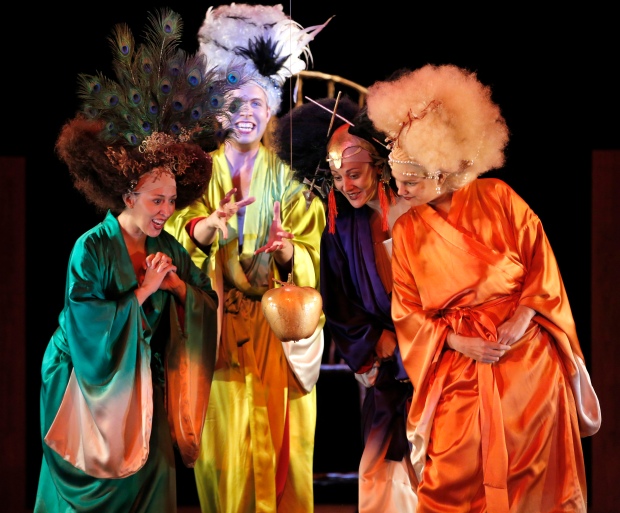 Discord (Christopher Lowrey) sets events in emotion by offering a golden apple ‘to the fairest’. Juno, Minerva and Venus prepare to do battle.