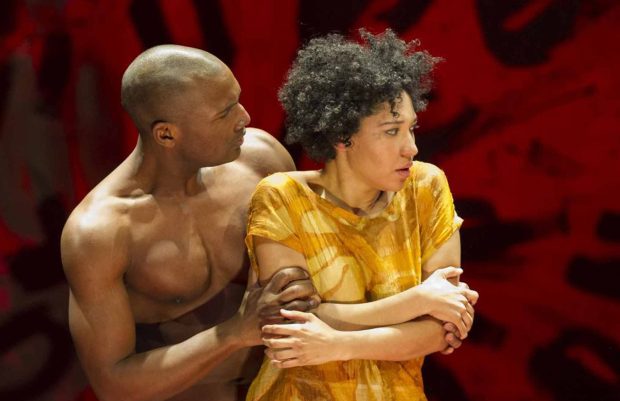 Reactions to English National Opera’s new production of The Indian Queen have been mixed. Some critics have praised it as a creative and courageous reworking of Purcell’s opera, which dares to acknowledge the atrocities carried out during the colonisation of the New World. Other people (friends and colleagues, thus, ordinary theatre-goers, not critics) have expressed bafflement and rising irritation. Apparently audience members have vanished during the intervals in a number of performances. It was clearly going to be a challenging experience but, when I went last Friday, I was nevertheless determined to enjoy it. But it didn’t quite work out like that.

I tried, really I did. I wanted to enjoy it. It was my first Purcell, after all! But, alas, halfway through the first act I began to sympathise with the comments my friends had made. I stuck it out to the end, of course – I am a stubborn soul and don’t like to be defeated – though the same can’t be said of the people further along our row, who absconded during the interval and simply didn’t come back. True: it’s challenging; but unfortunately, in my opinion, it has too many ideological agendas and too little narrative clarity to be satisfying.

Purcell’s Indian Queen was first performed in 1695, reworking an earlier play. However, only an hour’s worth of surviving music can be associated with the piece. (Over the weekend I borrowed the recording by Sir John Eliot Gardiner from my local library: the entire programme lasts for only 62 minutes.) The ENO version, directed by Peter Sellars, pads that out to three hours and forty minutes. Thus, even without the interval, you have two hours and twenty minutes of added stuff to account for. Some of that is other music by Purcell, which one friend described as his ‘greatest hits’, including both secular songs like Sweeter than roses and some of his religious music. This is all well and good; if you have to pad out a composer’s opera then it’s logical to draw on some of his most celebrated works. Much of the music was also played at what seemed (to me) to be a desperately slow pace, giving it an dirge-like air, which probably accounts for a few minutes of the running time.

However, the most significant additions to Purcell’s work are the spoken texts taken from The Lost Chronicles of Terra Firma (1996) by Rosario Aguilar, performed by an intense, urgent Maritxell Carrero. I haven’t read the book, but I understand that it uses imagined histories to retell the story of the Spanish conquest from the intertwined perspectives of six women. The texts chosen for the opera emphasise the sympathy and openness of female settlers’ engagement with the New World (embodied here by the character of Doña Isabel). Their desire to assimilate, to create and to understand is juxtaposed, without much nuance, with the ambitions of male settlers / soldiers to dominate, overpower, command and destroy. Subtle it ain’t: a more finely-shaded attitude might actually have made for a more engaging story. And yet this socially-conscious narrative is set off by some spoken sections of unexpectedly intense eroticism.* I’m not saying that the ideas in themselves were necessarily poor: simply that they felt like a series of ideological posturings rather than an organically-developing story.

Now, I don’t like being critical; I’d much rather bounce out of something enthusing about how wonderful it is; but I have to be honest if something leaves me cold. The worst thing is that there were things I liked and wanted to like. The set designs were based on vividly colourful paintings: not the kind of thing I normally enjoy, but which worked extremely well in this context, creating spaces and suggesting the emotional states of the characters. Indeed, all the performers were doing their damnedest with what they’d been given. I found the dancers especially captivating. Through their rhythmic, simple and powerful choreography they evoked Mayan creation myths in the opening scenes and returned throughout the production as embodiments of the native spirits of the New World. Even as their people were forced to accept new overlords and new gods, these ancient spirits continued to appear in dreams and visions: an effective concept. 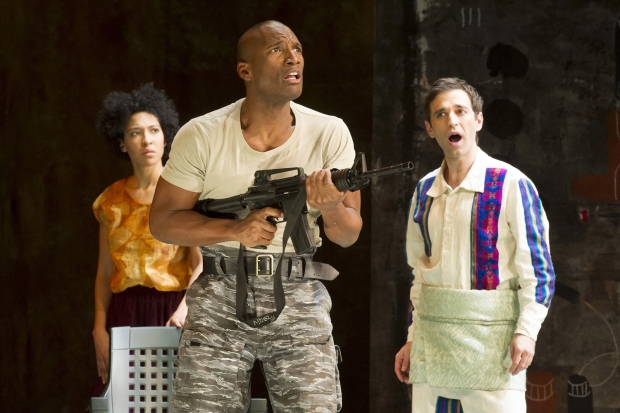 Don Pedro (Noah Stewart) begins to lose his faith in the New World, as Techulihuatzin (Julia Bullock) and a native deity (Anthony Roth Costanzo) look on

And what of the singers? There were some very talented people on that stage and they were almost criminally underused. Take Lucy Crowe as Doña Isabel, for example. She’s one of our most celebrated young sopranos and was the undeniable highlight here. Her glorious silvery soprano was effortlessly spot-on: the most memorable point for me was her exquisite rendition of O solitude, already an established favourite of mine. Julia Bullock as Techulihuatzin / Doña Luisa, the titular Indian Queen, was almost equally impressive. The part, as conceived by Sellars, was written for her and she had some powerful moments, brought to life with a gorgeous dusky voice with a rich underlying burr. Mind you, it was announced after the interval that she was suffering from a heavy cold but wished to continue and begged our understanding, so perhaps that burr was due to the cold? Still immensely impressive though.

Among the men, one in particular stood out. According to the programme, Vince Yi was playing the ‘trickster deity’ Hunahpú, but on stage he seemed to move between various generic roles. This baffled me slightly because he deserved more. He sang the title role in the tour of Artaserse last year; he’s singing Emilia in Vinci’s forthcoming Catone; and he has a voice of extraordinary bell-like purity and clarity which is unlike any other countertenor voice out there. But, if I wished that Yi had more to do, that’s true to an even greater extent for the promising young tenor Noah Stewart. I hadn’t come across Stewart before and certainly didn’t know he’s had a chart-topping classical album until I did my research afterwards. Here he didn’t sing a note until the second half, having spent much of the first half in a state of undress which led me to believe that Don Pedro was a silent role. Once he was allowed to sing, he had a beautiful voice; but why bother getting people of this calibre involved if you’re not going to make the most of them? 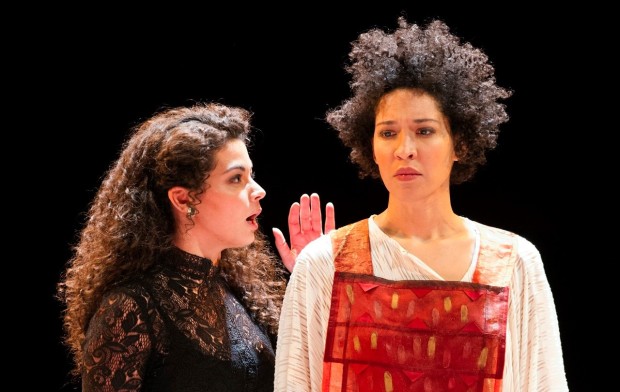 Frustratingly there were aspects and concepts that I liked: under other circumstances I might have found it an illuminating interpretation. But I feel there was just simply too much going on and too many competing agendas – an attempt to force Purcell’s music into an ideological straitjacket that didn’t work. It was also much, much too long. I’m not going to be put off Purcell. The music itself was beautiful and much of the singing was very good, especially from those I mention above. I’m just sorry that I can’t be more enthusiastic about the experience as a whole.

Now, as I’ve said, there are many examples of critics being very enthusiastic about this production; in fact, the vast majority are positive – more so, at least, than I am here. See, for example, the 3-star Guardian, and the 4-star Telegraph, while the Evening Standard praised its ‘ever-resonant social commentary’. However, specialist sites Classical Iconoclast and Bachtrack are unimpressed, as I was; the latter to the tune of a withering 1 star. It really seems to be a divisive production and ultimately, for me, a unsuccessful one, with Purcell’s music smothered by the imposed narratives of an overly earnest, self-conscious critique of colonial oppression and racial, sexual and religious inequality.

* In a first draft, I compared this to Purcell meets Fifty Shades of Grey. 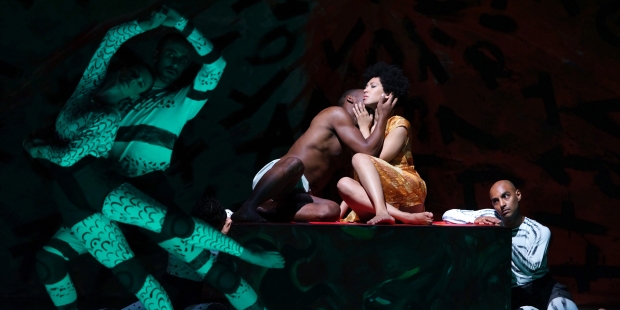