Since launching the new website, I’ve been busily spring cleaning my blog and, you know what? It’s amazing what you find at the bottom of the drafts folder. As a result, there will be several extremely belated posts cropping up over the next few weeks, starting with some Mozart, in the form of La Clemenza di Tito. As you may remember, I first encountered this opera via the modern, rather conceptual Salzburg version and was keen to compare that with a more traditional production. Enter the Met, stage left, with their legendary, ultra-conservative version. It may not be the most cutting-edge production in the book, but it gave me a visual feast of fine gowns, billowing cloaks and fabulous wigs.

Just to refresh memories, we’ll canter through a summary. Bowing to the will of his people, the Emperor Tito relinquishes Berenice, the foreign princess whom he loves and begins searching for a wife among the noblewomen of Rome. His gaze falls on Servilia, who fits the bill for many reasons: she’s beautiful, well-bred, modest and, best of all, she’s the sister of Tito’s old friend Sesto. Tito is delighted: he can satisfy the people and reward his loyal friend in one fell swoop. But his news isn’t received with the unbridled pleasure he expects. Servilia has absolutely no desire to marry the Emperor: she’s been in love for years with another of her brother’s friends, sweet, boyish Annio; and Annio himself is distraught at being forced to choose between his lord and the woman he loves.

Sesto sympathises with them both, but Tito’s announcement brings him problems of his own. They come in the form of his mistress Vitellia, the daughter of the deposed emperor Vitellius, who’s determined to claw her way back to her rightful place on the throne and whose thirst for power will stop at nothing. Initially she’d expected to achieve her aim by marriage: with Berenice gone, she’s surely the obvious choice to rule beside Tito? But when the Emperor offers himself to Servilia instead, Vitellia’s indignation sends her spiralling into treacherous ambition. If she can’t marry Tito, she will replace him. And who better to get him out of the way than Sesto, who is in thrall to her? Thus Sesto finds himself in the classic rock-and-a-hard-place situation: does he refuse his domineering beloved and risk losing her, or does he betray his friend? With heartfelt duets, scheming and the Capitol in flames – and that’s only Act 1! – this is Mozart at his most dramatic. 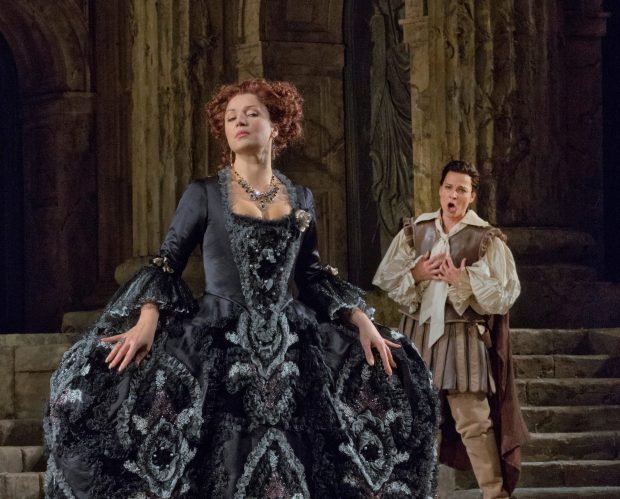 My friend and I have a theory that you can measure a countertenor’s career by watching when he moves from singing Ottone to singing Nerone in Poppea. The same appears to be true of mezzos with Annio and Sesto: Elīna Garanča, who sang Annio in the Salzburg version, takes on the role of Sesto here. Her Sesto is a thoroughly good chap, radiant and naive when he thinks of Tito, and initially somewhat dismissive of Vitellia’s plotting. That soon changes, however, and Sesto adopts a fairly consistent expression of tormented gloom. Vocally Garanča is pleasant to listen to, with a rich and fluid tone, but I initially found it difficult to warm to her. With Kasarova’s Sesto still fresh in my mind, I felt that Garanča was finding it hard to summon up the intensity that can make this role gut-wrenchingly moving. At times her performance felt a little polite.

But – and it’s an important but – I thought she delivered the goods when she needed to. Her Parto, parto suddenly sparked into life, apparently startling even Vitellia with its hardening of purpose, and Garanča also pulled it out of the hat in the final scenes. This is when emotion matters most, of course, and Sesto’s confrontation with Tito simmered with betrayal, confusion and remorse barely kept in check. Kasarova casts a long shadow, it’s true – especially when you hang around with Dehggial – but Garanča is perfectly capable and pleasant to listen to, even if she doesn’t quite manage to evoke every stage of Sesto’s internal agony.

In the Salzburg version, I had the impression that Sesto and Vitellia were very much of an age – indeed, that Vitellia, for all her fiery ambition, might be slightly younger than her world-weary, tormented lover – but the Met’s Vitellia definitely feels older. She comes across as a kind of Marquise de Merteuil figure, amusing herself with a smitten young cavaliere while she waits for her time to strike. Barbara Frittoli is suitably magisterial and I was especially impressed with her Non più di fiori, where the coloratura allowed her to vault impressively around in her register. In the face of such ambitious rage, poor Servilia always gets a little overshadowed, but she was served well here by Lucy Crowe. This was the first time I’d heard Crowe sing (it was long before the ill-fated Indian Queen) and her S’altro che lacrime was gorgeous, like honey wine on the ears. As I wrote naively at the time, she has a good voice for Mozart. 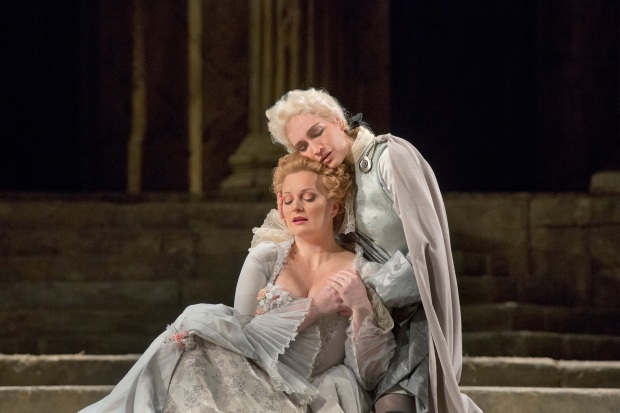 The highlight of the entire opera, for me at least, was Kate Lindsey’s Annio. This was the first time I’d come across her too, although since I watched Clemenza I’ve seen her as a delightful Cherubino in The Marriage of Figaro. (Her trajectory, incidentally, mirrors Garanča’s: after this Met Tito, she too graduated to Sesto, and will be singing him again at Glyndebourne in 2017.) Now, the role of Annio shouldn’t be a scene-stealer, but Lindsey had a habit of bursting in breathlessly upon scenes full of grave, noble sentiments, and half-tumbling down steps in excitement, all legs and elbows. Wide-eyed, earnest and boyishly handsome, her Annio was a cross between a nervous undergraduate and a newborn colt.

She was particularly fine at the reproachful glance, which found its triumphant pinnacle in Tu fosti tradito, where Annio fights to keep Tito’s clemency alive in the face of Sesto’s proven betrayal. Shuttling between Publio and the emperor, Annio goes so far in his exasperation to snatch the decree out of Tito’s hand and crumple it. And the duet with Lucy Crowe’s Servilia, Ah, perdona il primo affetto, was very affecting as a study of youthful, thwarted love. The young couple end up actually clinging to one another as Annio desperately tries to psych himself up to yield his beloved to the emperor.

You might remember that I wasn’t overly keen on the reading of Tito in the Salzburg version; the Met Tito (Giuseppe Filianoti), however, I found much more sympathetic. He is genuinely eager to please. We first see him bidding farewell to Berenice, who is almost manhandled onto a galley amid crowds of spectators. She runs back to him at one point, their genuine affection for one another suggesting a rare point of trust and sincerity in Tito’s life, and emphasising his sacrifice. For me, the friendship between him and Sesto was more credible here than in Salzburg: the two of them look close enough in age and you could imagine they’d been boyhood friends, with Annio as the kind of puppyish younger brother who tagged along with them. While Tito sings Del più sublime soglio, there’s a telling glimpse of the relationship between him and his two chums: Sesto and Annio stand dutifully alert while Tito speaks but then, as soon as he steps forward and loses sight of them, Sesto strides to Annio and shakes him behind their emperor’s back, as if to demand what he’s doing by so easily giving up the woman he loves.

This production, designed by Jean-Pierre Ponnelle, has a long history. It was filmed in 1980 using various archaeological sites in Rome as backdrops and, although clips from the DVD suggest it looks rather dated, I found this staged production captivating. I know perfectly well that Dehggial is going to despair of me, and I hasten to reassure her that I haven’t abjured the Salzburg version. That production gave us a more gripping and charismatic Sesto (Kasarova) and Vitellia (Röschmann); but for Annio, Tito and Servilia, the Met holds the crown for me.

I completely understand that long-term opera goers might find the Met’s version rather staid, but I’ve become interested in this genre at a time when the vast majority of filmed productions are conceptual. They’re so often weighed down by the desire to shock, to stand apart or to be ‘relevant’ that it can be hard to follow the story. My heart sings when I come across a lovely, historically sensitive production, because it’s so nice to escape from Regie once in a while. I relished the exuberantly crumbling columns and staircases of the sets and squeaked with delight at the visual references to Piranesi. If the staging didn’t quite manage to probe the psychological heart of the opera, it nevertheless conveyed its grandeur and splendour through its epic vision and sumptuous costumes. If enjoying such things makes me an unadventurous old buffer, so be it. After all, I do work in a museum and I occasionally wear tweed. It’s no wonder that ruins and columns appeal a little more than Kušej’s mind-scrambling, multi-level visions of sterile contemporaneity.

Unfortunately the Met haven’t released their Clemenza on DVD and so one has no choice but to tackle the Met on Demand website. In principle, this is a fine service which allows you to watch films of various performances from the last thirty years. You can take out an annual or monthly subscription, or rent by the opera. On the downside, the quality of the streaming could be improved because it took me ten minutes to get the video up and running and, even afterwards, there were several very annoying freezes (which naturally happened at the most dramatic moments). The On Demand section isn’t particularly broad either. There’s plenty of Verdi and Puccini, but very little from before 1800, which I suppose reflects the Met’s well-known suspicion of anything pre-Mozart.