(Hampstead Garden Opera at Upstairs at the Gatehouse, 30 April 2015)

Those who follow me on Twitter will be aware of my Xerxes Project. As I’ve booked to see three live productions of Handel’s Xerxes this year, each of which promises to have its own very distinct flavour, I thought I’d make a theme of it. (I’m also doing some broader historical reading on Achaemenid Persia, so I’ve been examining our favourite brat-prince from several different perspectives.) I kicked things off in style this last weekend by taking in two productions, in two countries, in two languages, in three days. Things got underway in Highgate on Thursday, where Hampstead Garden Opera was holding court at Upstairs at the Gatehouse, one of London’s leading pub-theatres.

It can be tough living in the shadow of a big brother.
It’s even tougher when your big brother is a king who
acts like a kid. Spending a fortune on insane building
projects, or cultivating a bizarre infatuation with a
plant, you can deal with. But when he steals your
beloved on your wedding day, it’s time to take action.

You probably know the story of Xerxes but, if you’d like a reminder of the plot, have a quick look at my post on the classic ENO production in September. HGO’s opera didn’t take any great liberties with the story. It was sung in English, using the Hytner translation originally made for ENO, but I’ll use the Italian titles when referring to arias below: the Italian title is often more familiar, and it’ll make it easier to cross-reference with the production in Düsseldorf.

The setting was modern, with a slightly vintage 1950s tinge to the ladies’ costumes, and a minimalist but strikingly effective stage design. Translucent curtain panels at the back of the stage could be closed to offer a space for hiding or spying on events; the plane tree was a simple plastic spike decked with sheets of paper; and Xerxes’ grand bridge was reduced to a fleet of origami paper boats on a bench. This was a wonderfully simple way to undermine his military hubris, as were the paper aeroplanes with which the cast were armed during the first choruses. Many of these choices were, I suspect, imposed by cost consciousness but they were presented in such a way as to give the show real artistic clout. There were other features I loved but I will come back to these in due course. 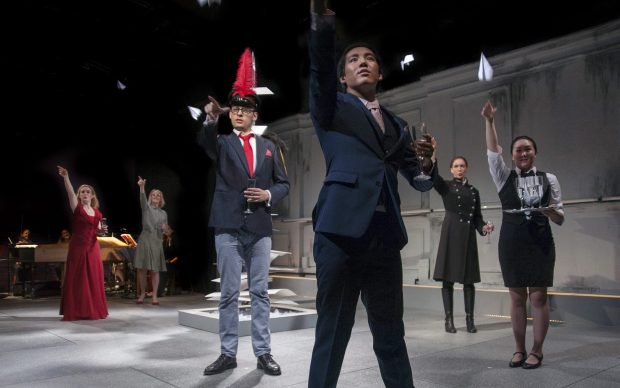 There were two alternating casts in this production* and, on the night we went, I thought the singing was very good, with some especially impressive voices. These are, however, singers at the very beginning of their careers and that came through in the odd vocal wobble here and there. We saw Paul Bork playing Xerxes and, in what follows, you must bear in mind that I’ve seen another Xerxes this weekend and Bork is up against some pretty heavyweight competition. Xerxes is also a devil of a role to sing, because you have to start the opera with the most famous and most challenging aria in the entire piece, which requires virtually faultless control on the messa di voce. Bork had crisp and clear high notes, but his lower register sounded uncertain and occasionally his voice had a breathy, slightly unstable quality that made me wonder if he had a cold. As the opera progressed he grew stronger: his Act 2 aria Più che penso alle fiamme saw some complicated scales and trills handled very nicely, and he turned in commendable attacks on both Se bramate d’amar and Crude furie (the latter was so simply staged that attention was locked on this brittle, power-crazed chap with a gun: a great image).

I’ll be frank. I’m not usually keen on Elviro. But James Schouten turned in so entertaining a performance that this character, whom I can normally take or leave, became the highlight of the show. His matey interaction with Arsamenes was thoroughly believable; his sheer delight in taking on disguises was infectious; and his appreciative eyeing-up of Atalanta in the final scene gave the concluding chorus a gorgeously comic element. (Some of this was unintentional, as both singers struggled not to choke on mouthfuls of apple.) And Schouten benefitted from some bright directorial ideas which gave Elviro a much more crucial part to play in the plot. The traditional flower-seller scene was present and correct, although here Elviro was trying to hawk flower-shaped balloons instead – with which he acted out a summary of the romantic confusion so far, for Atalanta’s benefit. (As I said to my friend afterwards, it was such fun that I couldn’t help wondering why no one has yet tried to do a Xerxes entirely with balloon animals. A gap in the market, I feel.)

One of the two strokes of brilliance in this production was to do away with Ariodates, Romilda and Atalanta’s father, as a ‘real’ character. Instead this blustering general becomes yet another role assumed by Elviro in disguise, by which he hopes to befuddle Xerxes and ensure that Arsamenes gets the girl. I was deeply amused to see that this ‘Persian general’ disguise consisted of black feather epaulettes and a plumed cap. Glorious. Schouten was a joy to watch as an actor, but he also had a deeply impressive voice, switching between high baritone for Elviro, a wonderful deeply resonant bass-baritone for Ariodates and falsetto for the flower seller. 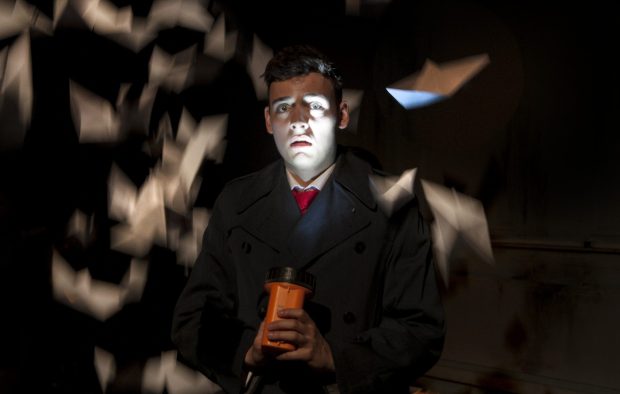 Elviro (James Schouten) at the breaking of the bridge, as paper boats tumble from the heavens © Laurent Compagnon

This cast also included a vocal surprise: a baritone Arsamenes. Who’d have thought it? It didn’t bother me too much, as I don’t know his arias so well and have fewer expectations of what they ‘should’ sound like. Besides, Oskar McCarthy turned in a strong, very self-possessed performance which emphasised the production’s decision to place the long-suffering Arsamenes firmly at centre stage. As his beleaguered fiancée Romilda, Madeleine Holmes was dignified and self-assured, with a velvety rich voice and a core of inner calm in the face of Xerxes’ unwelcome attentions.

In a slight twist, her sister Atalanta starts off the opera as a rather subdued shadow to her more glamorous sister. In woolly cardigan and librarian-chic glasses, this Atalanta was the quiet one you have to watch: the girl who’s always seen her big sister get the best of everything, and who now wants some attention for herself. Sophie Pullen did a great job channelling her inner minx and seemed to be thoroughly enjoying getting her teeth into her sparkly arias (and the apples she was constantly nibbling). I must also mention the two members of the ensemble: Beverley Vong, covering roles from waitress to servant to mother superior; and Martin Musgrave, looking formidable in dark glasses and earpiece as the Immortal charged with guarding Xerxes’ beloved plane tree.

I’m going to conclude with Amastris, played by Madeleine Sexton, with whom I got chatting on Twitter a few weeks ago when I saw her tweets exploring the historical background of her character. This research-based approach struck me as commendable and unusual; and I was intrigued to see her performance. I was glad to find that I enjoyed it very much: I couldn’t see much of the historical queen here**, but it was an extremely thoughtful and poignant interpretation of Handel’s character which really stuck in my mind. This Amastris moves through the chaos almost enclosed in her own veil of silence, observing and commenting and reflecting, but rarely directly intervening.

Sexton dealt beautifully with the slower arias in which Amastris confronts her own sense of betrayal: her low notes are sumptuous and she had great control in all areas of her range. Her Saprà delle mie offese was sung with restrained anger in the first A section (she glared at the plane tree so sternly that I half-hoped she was going to grab a stick from somewhere and demolish it), and during the da capo she sang to one of the paper aeroplanes cradled in her hand. Somehow this underscored her unequal relationship with Xerxes: a mature, capable woman up against a frenzied, demanding, unrealistic man-child. I also thought Cagion son io was desperately sad: after asking Romilda to deliver her letter to Xerxes, Amastris quietly faces up to the loss of all her hopes. Taking her wedding dress from her carpet-bag, she holds it for a moment and then offers it up to Romilda: one of them, at least, might be able to wear it and find happiness. This was a very noble Amastris: one capable of great tenderness and forgiveness***, and rendered all the more powerful by the final scene.

This is a spoiler, of course, so consider yourself warned. As I’ve said before, the resolution of Xerxes is not an easy one to buy into. Having seen the king haring after Romilda for most of the opera, we’re then expected to believe that he undergoes a guilt-stricken but sincere change of heart and is reconciled with his faithful Amastris just in time for the final curtain. This has never rung true to me. But here HGO pulled an absolute blinder: Amastris accuses Xerxes of infidelity and then, suddenly, her servant comes on holding a baby. A baby! I actually gasped. Suddenly it all made sense. Why does Amastris persist in the face of Xerxes’ complete indifference? Why does she forgive him? Why does he confess his folly and return to her? Because she has already had his child. A stroke of utter genius.

I’ll be completely frank: I’d expected this to be an aperitif for my trip to Düsseldorf, but thanks to the powerful impact of its concept and the shrewd reading of the characters, this Xerxes punched well above its weight. I would go so far as to say that its Amastris and Elviro proved much more to my taste than their counterparts in Düsseldorf, and its final scene offered a real emotional punch which none of the other productions I’ve seen, live or on film, with much more generous budgets, has come close to challenging. Bravo HGO.

* I’d have loved to see the production twice, once with each cast. In the other cast, Xerxes was played by Jean-Max Lattemann.

** I’ve spent quite a lot of time reading Herodotus and Ctesias recently. Just in case anyone’s wondering, you did not want to get on the wrong side of Amestris, the historical equivalent of Handel’s abandoned princess.

*** That comes entirely from Handel / Stampiglia, I am sorry to say, forgiveness not being one of the historical Amestris’ strong points. 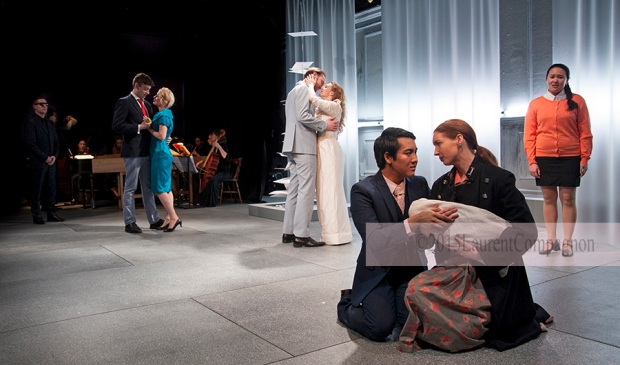