Full of wit, farce and playfulness, The School of Jealousy was an instant hit, becoming one of the best-loved operas in Europe within a decade of its premiere in 1778. It told a story that was immediately accessible: a jealous, bourgeois buffoon locks away his pretty wife, only to bring her to the attention of a philandering nobleman. It’s a tale of love, lust and forgiveness, scripted by the poet Caterino Mazzolà and tweaked here and there by the young Lorenzo da Ponte. Musically, it sparkles: vivacious, ironic and colourful, it shows that Salieri in his prime was already a master of the comic idiom that would become indelibly associated with a certain younger contemporary of his.

I feel rather bad bringing Mozart up so early in a post on Salieri, because the Italian composer’s great curse is that he’s permanently overshadowed by this young upstart. If people aren’t claiming that he murdered Mozart (which was already being rumoured in Salieri’s own lifetime), they’re treating him as a kind of forerunner: a John the Baptist, come to pave the way for the great event. This isn’t fair. Far from springing from the head of Zeus fully formed, Mozart must have studied Salieri’s music with the pick’n’mix avidity of a magpie. His comic overtures have the liveliness that characterises Salieri’s overture here; he adopted the tendency towards ambitious trios, quartets, quintets and choruses; and he drew on similar material for his comedies of contemporary manners.

There is actually good reason to mention Mozart in connection with The School of Jealousy, or La Scuola de’ Gelosi as it’s titled in the original Italian. The opera was so successful that da Ponte and Salieri decided to write a sequel some years later, which would be called La Scuola degli Amanti, or The School for Lovers. This didn’t come off, as Salieri lost interest or didn’t have the time to finish it, and so da Ponte ended up taking the libretto to another composer: to Mozart himself. We don’t know it as La Scuola degli Amanti nowadays, but by another name: Così fan tutte. This explains why there are some strong similarities between The School of Jealousy and Così. Both operas centre on a test of fidelity, overseen by a detached and somewhat cynical figure. In Così, the Svengali is Don Alfonso; here, in The School of Jealousy, it’s the Lieutenant, who takes on a slightly more benign role, bringing two estranged couples back together by forcing the partners to accept their deep-seated love for one another.

Blasio, a corn merchant, is convinced that his pretty wife Ernestina is harbouring a lover. Seeking to frustrate her plots, he locks her inside the house, where she laments her state to the valet Lumaca and the maid Carlotta. Carlotta is on the verge of leaving Blasio’s employment and going to work for the Countess Bandiera, a local noblewoman, but she fears that her new job won’t bring her any more normality. It’s well known that the Countess is jealously attached to her philandering husband the Count, who has a special fondness for seducing the wives of jealous men. Inevitably, his eye fixes on Ernestina, a passion made more possible by his role as Blasio’s patron. Torn between the social cachet of receiving the Count in his home, and the nobleman’s reputation as a bounder, Blasio decides to take the risk and watches in despair as his wife falls all too clearly for the Count’s charm. Blasio has to catch them in the act, to satisfy his own jealousy if nothing else. But what if there were a better way to bring his wife back to him? Fortunately, his cousin the Lieutenant (who also admires the Countess’s fortitude) has a cunning plan. 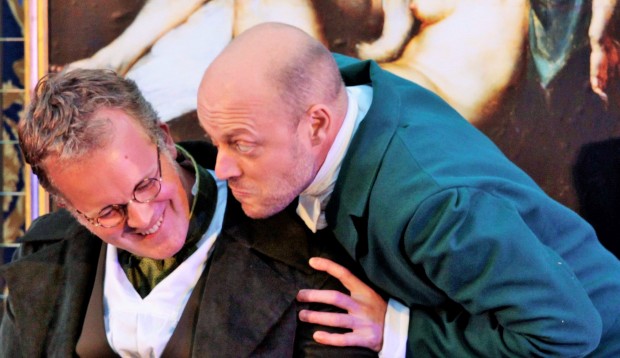 Unlike last year, I couldn’t make it down to Bampton itself, but was delighted to see that the cast, set and costumes had all come down to London for the night at Smith Square (I’d assumed it would be a concert performance and was thrilled to be proven wrong). The singing was universally strong, although Nathalie Chalkey (Ernestina) was recovering from flu and begged our indulgence as she took a couple of scenes to warm up. I’m always astonished at how good singers manage to be even when they’re ill: Chalkey’s soprano was light and clear, a lovely soubrette kind of voice, with perhaps only a very slight huskiness to show that she wasn’t completely on form. Her acting was especially good, as Ernestina vacillates between exasperation at her husband and the growing temptation of the Count’s oily advances. Vocally there was a very pleasant contrast between her and Kate Howden’s Carlotta, whose colourful mezzo shimmered with vibrato. Howden was slightly ill-served by Salieri, who doesn’t give Carlotta much of a role; I would have liked to hear more of her.

I seem to have developed a fondness for sleepy baritone servants (like Elviro), because Samuel Pantcheff’s performance as Lumaca was one of the highlights of the opera for me. Caught up in the shenanigans of his social superiors, Lumaca tries to give Blasio sensible advice but is ignored; quite reasonably, what he sees is enough to risk putting him off his own nascent relationship with Carlotta. Pantcheff not only had a powerful voice – sometimes the only one that could be clearly heard above the orchestra in its louder moments – but wonderful comic timing and an expressive face which captured all the absurdities of the plot. He also tackled some tongue-twistlingly quickfire delivery with nonchalant aplomb. He’d make a marvellous Figaro. He was usually playing off against Matthew Sprange’s fussy, possessive Blasio, another strong comic performance bolstered by a fine, musical baritone a touch higher than Pantcheff’s. 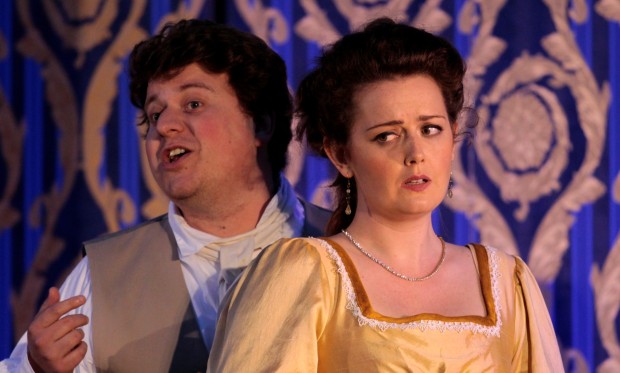 The ladykiller Count was Alessandro Fisher, who made his entrance wearing a top hat of such proportions that one could only assume this young nobleman was compensating for something. Smooth and saturnine, Fisher gave the Count convincing charisma, set off with a warm and supple tenor and an omnipresent twinkle in his eye. His fellow tenor, Thomas Herford as the Lieutenant, was a surprisingly beneficent puppet-master, aiming at resolution rather than revelation. Sometimes I felt that a touch more projection and crispness on his coloratura would have been helpful, but he did well with a role that requires a calm balance between the pairs of hysterically squabbling lovers. With my predisposition to love anything involving horns or trumpets, I particularly enjoyed his Act 2 aria Demanding fidelity will not keep her home, where horns (the eternal symbol of the cuckold) provide the opening accompaniment.

The most demanding role in the opera is that of the Countess, whom Jeremy Gray identified in his pre-performance talk as the moral centre of the piece. For all that, she’s very much a noblewoman of her time, who is less shocked by her husband’s infidelity than by the shocking news he’s walking out with a commoner. With a notorious eight-minute accompanied recitative and aria in Act II, she both has to manage the technical demands of the music, and keep the audience engaged in the plight of the character. Rhiannon Llewellyn took on the challenges of the role with flair and gave a beautifully nuanced performance, concluding her epic aria with fluttering runs of notes that showed off the flexibility of her lovely voice. 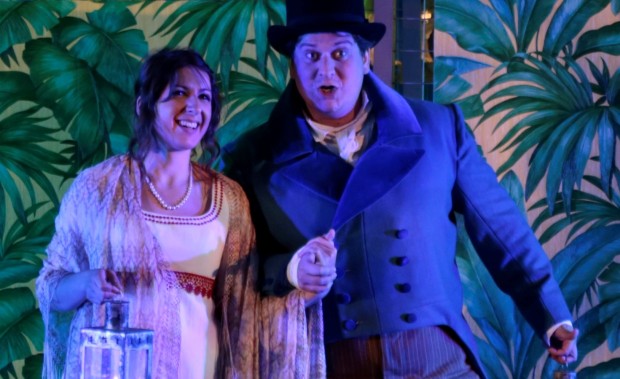 Translated by Jeremy Gray and Gilly French, the libretto was full of wit. In Act 1, Blasio is confounded when he demands that Ernestina give him what he believes (correctly) to be a love letter, only to be presented with a newspaper instead. The original Italian text for this aria is full of topical allusions for its 18th-century audience and so Gray and French had cheekily updated it, throwing in allusions to the wall on the Mexican border and (hopefully) the only reference to Donald Trump in Baroque opera. This freshness always stayed on just the right side of irreverence and showed the same creative spirit that embodied the set, where we moved between Blasio’s modest home and the Count’s palace by the expedient of unfolding screens along the wall, to change the wallpaper. Costumes and scenery were Regency, which set the action in a world familiar to us from our own Austen comedies of manners.

All was very well conceived and carried off with panache and high production values. I actually enjoyed this much more than I did the Gluck and Arne last year, perhaps because as a full-length opera I was able to get into it more easily, and I’m pleased to hear that by chance there’s also a recent recording of The School of Jealousy, so there’s no danger of this charming opera fading back into insignificance. I can’t wait to see what Bampton come up with for next year’s offering.