When you think of Louis XIV, chances are that you think of Versailles. The Hall of Mirrors; the fountains and festivals; the gold, glass and glitter of the Ancien Régime. But medals? Maybe not. And yet Louis was responsible for one of the most ambitious and innovative of all medal series, the Histoire medallique. Published in 1702, towards the end of his reign, it aimed to celebrate and promote his victories, both as a military commander and an administrator, and to gloss over his defeats and failures.

Throughout his life Louis was acutely conscious of the importance of ‘glory and memory’ and the Histoire medallique was an attempt to impose on the world a vision of his reign as he wished it to be remembered. This small but fascinating show, tucked away on the upper level of the British Museum, tells the story of how this remarkable work of propaganda came to be created, and places it in the context of other medals produced throughout Louis’s long and eventful reign.

Indeed, medals played a large role in establishing the cult of the Sun King. When Louis came to the throne in 1643, his finance minister Colbert commissioned a medal to celebrate his accession. On one side the five-year-old king appears in profile in classical dress, wreathed in laurel. His mother Anne of Austria is depicted in profile behind him, as you find on antique cameos. On the other side of the medal, Louis is shown in the guise of a fully-grown Apollo, driving the chariot of the Sun and guided by Venus, the Morning Star (a flattering reference to Anne’s regency).

Ten years later he appears as Apollo again, this time on a medal struck to commemorate the end of the Fronde: a decade’s worth of uprisings and riots against the influence of Anne of Austria’s favourite, Cardinal Mazarin. Here Louis/Apollo is shown in a chariot, his rearing horses ready to plunge straight out from the medal’s surface, beneath an inscription proclaiming ‘Serenitas’ – a touch on the optimistic side, one feels. As the years passed, the emphasis shifted. The king was no longer identified with Apollo but with the Sun itself, a comparison which reached its apogee in the medals designed by Louis Douvrier. He was responsible for Louis’s most famous medal, in which the king is shown as the radiant face of the Sun, beneath the motto ‘nec pluribus impar’ (‘not unequal to many’). That boastful motto would come back to haunt Louis, as the exhibition shows.

Each of the cases in the exhibition looks at a different aspect of Louis’s medals. It begins with a practical look at their design: how could one present a historical event clearly and concisely within such a small space? Several examples are given. Sometimes the designers focused attention on a few key figures to represent a wider scene, as in the Reception of the Ambassadors from Siam. Alternatively they might transform the event into an allegory which allowed for a more creative representation of historical fact, as in The Crossing of the Rhine. Each of these medals is shown with a photo of the same event recorded in a different medium: painting or sculpture. It makes a good point about how different formats forced different considerations on the artist.

But how did you decide which events to represent? Louis and his advisers produced medals of two different sorts, broadly speaking. First there were those showing his achievements as a good ruler. Louis was keen to publicise his virtues: he also wrote memoirs, while still a young man, which were designed to be a handbook in good governance for his infant son. And so the medals of this sort mark his foundation of charitable institutions, such as Les Invalides (1676), or the splendid buildings built by his command. The exhibition includes medals showing two rival designs for the Louvre: that submitted by Bernini in 1665, which was rejected, and the successful design proposed by Claude Perrault in 1667. There were also medals celebrating the king’s personal qualities, such as ‘assiduitas’. Louis as Apollo once again, drives his chariot across the sky, indicating the importance of hard work (the king did at least five hours’ work a day).

But the other kind of medal did even more to burnish his reputation. These showed scenes of military glory. Due to the demands of the medal format, battles and victories were often represented in allegorical form, and that’s shown here in examples such as The capture of Tortosa (1648), in which the Catalonian city appears as a woman leaning on an anchor with a ship beyond; or The capture of Bouchain (1676), in which Louis appears as Perseus transfixing his enemies with Medusa’s head. 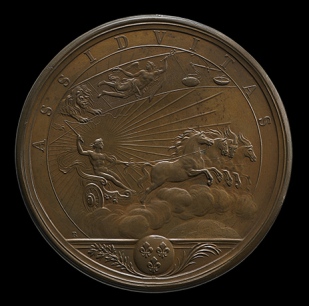 Louis’s version of the Peace of Algiers, showing the town grovelling at his feet

Medals were a great form of propaganda; but unfortunately Louis didn’t have a monopoly on their production. His pompous self-celebration made him an easy target for his enemies, who swiftly began producing medals of their own to undermine him. There are some great pieces here which show that Louis might remember an event in a very different way from his rivals. A good example is the medal struck in 1684 to celebrate the Peace of Algiers. Shown in classical robes, a personification of Algiers kneels before Louis, who is the very picture of a benevolent classical conqueror. But the story in a Dutch medal from 1689 is a little different. Here Louis, in a fancy dressing gown, grovels before two Oriental potentates beneath the inscription ‘gallia supplex’ (‘France begs’).

Things got worse in the 1690s and 1700s, as Louis’s rivals gained the ascendancy in Europe and his much-vaunted glory as a commander became even more overshadowed. In 1690, for example, Louis had himself represented as Neptune on a splendid medal commemorating The Battle of Beachy Head. Two years later, in 1692, the Germans struck back after Louis’s defeat at the Battle of La Hogue with a medal showing the Sun King being royally thrashed by the god for his presumption. And the bombastic motto ‘nec pluribus impar’ offered a wealth of opportunities for parody, most wittily in the Dutch medal issued after the Battle of La Hogue, where the French flagship Le Soleil Royale exploded. One side shows Louis in the background, scrambling out of his sea-chariot pulled by frogs. On the other, his flagship is shown sinking, while an inscription notes laconically: ‘nunc pluribus impar’ (now unequal to many).

The exhibition concludes with a case devoted to the men who made the medals happen. Colbert, whom I mentioned earlier, was behind the earliest medals of Louis’s reign, and he founded the Petite Academie, a group of historians, writers and scholars who decided which events should be represented and how. Later, having acquired the grander title of the Academy of Inscriptions and Medals, this same committee oversaw the production of the Histoire medallique itself. There was initially some debate over how the king should be depicted on the medals, but thanks to the strong classicist faction in the Academie, the iconic image was adopted which is now so familiar to us: Louis in classical-style armour with a rather incongruous periwig.

A British medal parodying Louis’s defeat at the Battle of La Hogue: he is thrashed by Neptune (reverse)

A Dutch medal parodying Louis’s defeat at the Battle of La Hogue: his flagship explodes (obverse) while Louis escapes in a frog-drawn sea-chariot (background on reverse)

Throughout his reign, the medals’ designers included some of the most famous artists of the age, including Charles Le Brun and Antoine Coypel, and among the medallists themselves were phenomenally gifted craftsmen like Jean Warin, who appears in a charming portrait at the Monnaie de Paris teaching the young Louis how to understand medals. And just to conclude, we have a glimpse of the practical side of medal-making. There’s a wax medal design by Giovanni Hamerani in which every detail is crisp and clear, from the king’s curling hair to the scales and the gorgon’s head on his breastplate. There are even examples of the puncheons and dies actually used to stamp the design into the medal (those shown here are for a medal of Isaac Newton, but the principle was the same), and a photo of the screw-press used to make Louis’s medals.

I thought this was a great introduction to an aspect of art that I really don’t think about enough, but which was so significant at the time. I was already aware that Louis’s use of medals inspired similar projects in later centuries, most famously perhaps the analogous Histoire medallique planned by Napoleon and overseen by Vivant-Denon. But I hadn’t ever had the chance to look so closely and thoroughly at medals before, and it really repaid close attention.

The show has raised lots of questions that I now have to go away and find out about: how many medals might have been produced of any one design? Realistically, how widespread were they and how useful as propaganda? How much might you have to pay for a medal? Were they objects that ordinary people might have seen or was their circulation very much restricted among the political classes? And how many other rulers were inspired to try the same sort of thing? A number of medals were struck by William III of England, which were often used to satirised Louis even while William was emulating him, right down to the classical-armour-periwig combo he adopted for his portraits. Much to explore, I feel. If you’re around the BM before November, do seek it out in Room 69a. 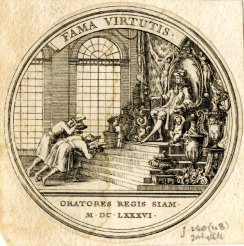 The ambassadors from Siam, shown in Sebastian Le Clerc’s print made for the companion volume to the Histoire Medallique. Note how even between medal and print there are differences: the engraving allows for a lot more detail in Louis’s dress, hair and throne

One thought on “Triumph and Disaster: Medals of the Sun King (2015)”