Maybe it wasn’t the best idea to book tickets for the opera on the hottest day since 2006, but nevertheless here I was, wilting gently in my standing place at the back of the stalls in the Royal Opera House, and preparing myself for my first encounter with Don Giovanni. As I’ve come at opera by a rather niche route, I’ve managed to avoid virtually all the great blockbusters and so knew nothing about Don G beyond the plot. I hadn’t even heard any of the music before. And I have to be brutally honest and say that I didn’t immediately warm to it as an opera.

Some parts of the music felt very familiar, of course – there were still flashes of the old opera seria style, to which Mozart returned in La Clemenza di Tito four years later. But these were offset with swathes of more typically classical music, which felt rather heavy in comparison. It just lacked spark. Perhaps it was the heat. Or perhaps its status as a taken-for-granted masterpiece means that I had expectations which couldn’t be met. Probably I need to listen to it several more times, and I’ve dutifully taken a recording out of the library. However, I did think that this production was a very good introduction to the opera, with an impressive cast and some extremely intelligent designs which made for an exciting and engaging aesthetic.

The Spaniard Don Giovanni is a nobleman, seducer and general all-round rake: Casanova would have been grudgingly impressed by him. Women across Europe have fallen at Giovanni’s feet – two thousand and sixty-five of them, to be exact; and he can be exact, because his long-suffering valet Leporello notes down their names in a little book, his ‘catalogo‘, with which he tracks his master’s depravity. As the opera opens, Giovanni bids farewell to his newest conquest, the aristocratic Donna Anna; but as he escapes down a ladder in the dark, he’s challenged by her elderly father, the Commendatore. A struggle follows and gets out of hand: Giovanni fells the old man with a mortal blow before striking a hasty retreat with Leporello in tow.

The distraught Anna has no idea what to do and, when her fiance Don Ottavio arrives to comfort her (too little, too late), she can’t explain what has happened. Nor, rather implausibly, does she seem to know the identity of the man who’s just ravished her, even though it becomes clear that she, Ottavio and Giovanni all move in the same social circle and know each other well (it must have been very dark). She and Ottavio vow to track down her father’s murderer; but they aren’t the only ones who are after Giovanni.

In a familiar plot development, he’s also being hunted by his scorned fiancee Donna Elvira, who unfortunately isn’t disguised in an amusing way but is nevertheless dead-set on making an honest man of this reprobate. And Giovanni does himself no favours by being distracted by yet another pretty face, immediately after his dalliance with Anna. He glimpses the peasant girl Zerlina on her wedding day, and her pugnacious husband Masetto rapidly joins the army of those who are itching for revenge. But Giovanni’s greatest enemy is yet to reveal himself: for the Commendatore himself cannot rest in his grave until he has brought his murderer to justice.

There was a starry cast, as you’d expect of something at this level, but I didn’t quite understand why some singers got so much more applause than others at the end. For example, I was thoroughly unimpressed by Rolando Villazón. Since seeing the opera I’ve read that he’s recently had vocal issues and is making a comeback, which earns him some indulgence; but on the night I was baffled by the audience’s enthusiastic reaction. His tenor sounded thin and brittle, especially on his high notes, and I didn’t feel that there was much warmth or power in his voice. Granted, he had a devil of a role. Ottavio must be the most boring man in opera (he’s even wetter than Poppea‘s Ottone, which is saying a lot), and it’s no wonder that Anna’s head has been turned by Giovanni’s swaggering sex-appeal. I have to agree with Dehggial, who said that Ottavio’s and Anna’s scenes were just rather dull.

Conversely, I was pleasantly surprised by Julia Lezhneva’s Zerlina. I know some people find her voice a little too pure and cold, but I thought she did well here, especially because she couldn’t hide behind the kind of blinding coloratura that served her so well in L’Oracolo at the Barbican. Her voice was brought out in the open, and put on display with a series of more lyrical arias than I’ve heard her sing before. Even if I concede that her vocal performance lacks emotional depth (if the role of Zerlina requires that), I thought she sang with flirtatious charm and acted her socks off. I prefer listening to her tackle the complex coloratura of Baroque music, but her crystal-clear soprano proved a pleasant contrast here to the slightly more rounded voices of the two leading ladies. I was glad to see some energetic applause for her at the end.

Albina Shagimuratova’s Donna Anna, however, received the lion’s share of the cheers. I certainly thought she was an fine singer, and she had a marvellously anguished aria in Act 2 (Non mi dir, I think), in which she tries to reconcile her grief over her father’s death with her love for Ottavio. That was a fine performance and moved me very much. Perhaps my overall appreciation of the role was blurred by my confusion over the characterisation. This Anna was unwilling to let Giovanni go at the start of the opera (even though she doesn’t know who he is, which I still find implausible); and, throughout, there are hints that she would just have to be left alone with him to fall again. To me that sits ill at ease with her supposed desire for revenge over her father’s death. Maybe there are nuances I’m missing. I should try to rewatch it via the Royal Opera House’s broadcast.

For me the stand-out female voice was Dorothea Röschmann’s Donna Elvira: she just seemed to be thoroughly attuned to the music and I had the strange feeling that Mozart sounds more like Mozart when she sings it. Perhaps that’s because I know her primarily for her excellent, vampish Vitellia in Clemenza, and her voice retained something of that opera seria quality here, whereas Shagimuratova, for example, sang in a more classical style which didn’t seem to bring out Mozart’s shine quite so much. Röschmann has a brightness and suppleness to her voice which hints at imminent sparkling cascades of notes, and a resonance which effortlessly rang off the stage. She sang Elvira with a mixture of pathos, fury and icy dignity, and I thought she was immensely good. 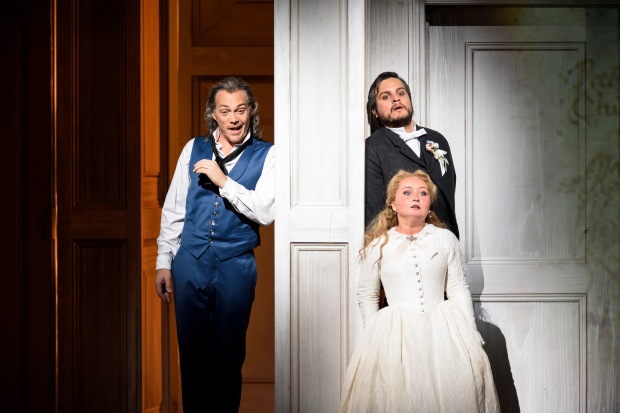 And what of our Giovanni? Well, I’d expected great things from Christopher Maltman and he delivered in spades. I’ve been rather fond of his voice ever since I saw his Achilla in the Glyndebourne Giulio Cesare, but here in Don Giovanni he sounded even better: robust, honeyed and thoroughly sensual where necessary. He also has great stage presence: Giovanni is a swine through and through, but he needs charisma. We, the audience, need to be seduced by him just that little bit, so that we care about what happens to him. And I think Maltman played it absolutely perfectly, treading the high-wire between amoral bastard and charming scoundrel.

The most striking thing about the production, though, was its design. The basic set was the standard rotating building, with stairs, landings and windows lending themselves to eavesdropping and concealment. But everything was enlivened by a remarkable use of projections, which helped to set a mood and resulted in some very clever trickery (the scene where Leporello is disguised in Giovanni’s clothes, for example). As the overture builds, the facade of the building becomes covered with hundreds of women’s names, appearing as if a hand is scribbling them down, as if they’ve crawled out of Leporello’s little book. Throughout the show, these names appear at various points to taunt the women: both Anna and Elvira, trying to stand on their dignity, find themselves undermined by realising that they’re just another notch on the bedpost.

And, if the names haunt the women, then Giovanni has his own spectres: ghostly figures in gauze and muslin who creep through the rooms of the building, half-seen, representing all the women he has betrayed. I found these silent figures very effective and unnerving: they set up a sense of supernatural justice right from the beginning, even before we knew about the Commendatore. At other times the projections help us to see through Giovanni’s eyes, as a way of showing the complexity of his thinking. As he stands at an upper window, planning the great ball where he intends to seduce Zerlina, his thoughts spiral out from him in a vertiginous swirl of projections, boxes within boxes, swirling and expanding faster and faster. It reminded me a little of the mind-palace graphics used in Sherlock and had the same implication: trying to use visual means to show the workings of a shrewd mind. 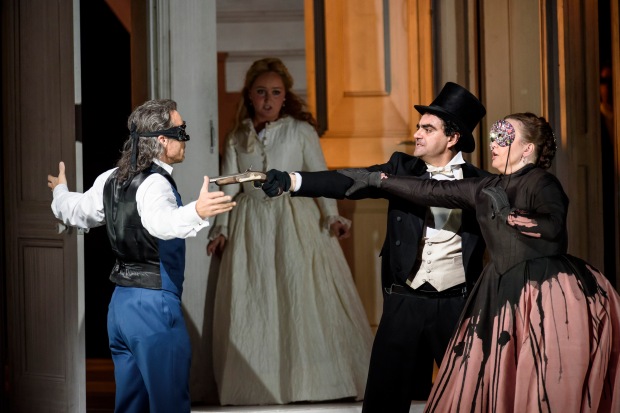 These projections had a large part to play in the finale too. Initially I was a bit underwhelmed by this ending: I might not have known much about Don Giovanni but I did know about him being dragged down into hell by the Commendatore and I’d been looking forward to it. But at first it all felt a bit limp. Where was the hellfire? The fiends? The melodramatic ending? And then I began to think about it and realised how clever it was.

In this production Giovanni is simply abandoned on the steps of the building, beneath the scrawl of his conquests’ names. And then the women’s names begin to disappear. Giovanni watches as they vanish: his life, his conquests, all is fading away, ceasing to exist. He’s not vividly dragged down into hell: he’s just being rubbed out. Finally all that is left is a single spotlight on Giovanni himsef; before that, too, winks into darkness. In retrospect, I found this a very smart ending. It doesn’t have the brio and shock value of devils and flames and so forth, but maybe it taps into modern sensibilities in a more unnerving way. Hell? Few of us really believe in that nowadays, let alone in literal fire-and-brimstone and pitchforks. But to be forgotten? For our attention-seeking age, which thrives on public recognition, perhaps that’s the worst fate of all.

At the end of the performance, I’ll be honest – no matter how much of a philistine it makes me look – I had no great desire to see the opera again. I’d been there, done it, ticked it off. But I’ve just discovered that Hampstead Garden Opera are doing their own take on it in November and so I might well go back and give it another go. It’ll be interesting to see another take on the production (their concept sounds rather fun) and, as I said earlier, I probably just need to listen to the music a bit more in order to better appreciate the opera. So come back in the autumn and we’ll see whether I get on with it a little better then.

For a more informed commentary on the opera and a comparison to last year’s run of the same production with a different cast, take a look at Dehggial’s blog.