I saw Helen Edmundson’s play The Heresy of Love over a month ago and, since the run finished in early September, there may be little point posting on it now. However, in recent days I’ve been turning it over in my mind again, thanks to the novel I’m currently reading: Flow Down Like Silver, about Hypatia of Alexandria. The parallels between these two brilliant women are obvious and crushing. Both were rich in intelligence and wit; both were faced with a new and unforgiving religious regime, which couldn’t tolerate that which it couldn’t control; and both were punished because they strayed beyond the confines of what was considered acceptable for a woman to know. Both stories provoke me to anger. Both deserve to be better known.

Like men, do [women] not have a rational soul? Why then shall they not enjoy the privilege of the enlightenment of letters? Is a woman’s soul not as receptive to God’s grace and glory as a man’s? Then why is she not as able to receive learning and knowledge, which are the lesser gifts? What divine revelation, what regulation of the Church, what rule of reason framed for us such severe law?

Sor Juana Inés de la Cruz (1651-1695) was something of a prodigy. By her mid-teens, when she joined the viceroy’s court in Mexico City as a lady in waiting to the vicereine, she was already noted not only for her beauty but also for her theological understanding, her knowledge of Latin, Spanish and Nahuatl, and her gifts as a poet. It’s said that, like a latter-day St Catherine, she astonished an assembly of philosophers and clerics at the age of only seventeen. A glittering future beckoned: court patronage and a splendid marriage, no doubt. But Juana herself had other ideas.

Determined to find a place that would give her space to think and write, she entered the convent of St Jerome in 1669 and became a nun. Although this was technically a closed order, she was far from deprived. Excavations suggest that some cells were more like suites, with private bathrooms and living rooms, and Juana was able to receive visits from the vicereine and other friends from court. It was to them that she dedicated her works: poems, passion plays, hymns, secular songs and at least two theatrical plays. Celebrated and admired, she’d found the perfect niche in which to survive as an intellectually curious woman who wished to avoid the loss of independence that would come with husband and family. 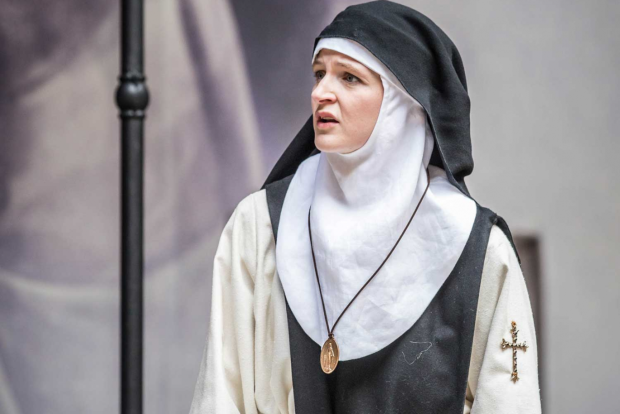 But then – and this is where the play begins – a new archbishop comes to Mexico City from Spain, with the threat of the Inquisition in his wake. Shocked by the licence he sees all around him, Aguiar y Sejas (Phil Witchurch) is determined to save the souls of his people, who have been misled by aristocratic indulgence and frivolity. Many things in Mexico horrify him, but one of the most alarming is the news that a nun is writing plays for the court and openly discussing theology. She must be stopped.

But the Archbishop’s task won’t be easy. Juana (Naomi Frederick) has many supporters, drawn not just from the social elite but also from the Archbishop’s own subordinates. Her confessor, Father Antonio (Patrick Driver), remains her friend even as he struggles with his own doubts over the propriety of her lifestyle; and she has also stimulated the interest of another powerful cleric: the ambitious Bishop Santa Cruz (Anthony Howell). Nursing a bitter fury that the archbishopric has gone to Aguiar y Sejas, and not to him, Santa Cruz sees Juana as a weapon in his own advancement. Plotting how best to discredit the Archbishop and take his place, he decides to favour this remarkable woman and, through becoming her friend, win the favour of the viceregal court.

He isn’t prepared for what he finds, though: a sharp, witty, down-to-earth woman who is still beautiful, and who for her part is intrigued by this clever, personable man who has taken such an interest in her. A connection made purely for the sake of ambition threatens to become clouded with something else; but Santa Cruz is too wise for that. After all, there might come a time when it’s no longer convenient to be seen as this woman’s friend, and he can’t afford to completely cut his ties to Aguiar y Sejas. Juana, too, has other concerns. As the new Archbishop tightens his grip, she finds herself being denied privileges that she’d come to take for granted. She begins to fear that soon she might even be forbidden to think with the mind God himself has given her. She too must be careful, fighting for her independence without overstepping the line.

And it won’t be an easy battle, for she has enemies even within the convent, such as the envious Sor Sebastiana (Rhiannon Oliver), who feels that her own ecstatic visions deserve as much attention as Juana’s worldly thoughts. And then there is another kind of trouble: Angelica (Gwyneth Keyworth), Juana’s irrepressible niece, who has joined the convent as a novice. However, as adolescence creeps upon her, Angelica is discovering that the world holds things much more to her liking than a nun’s habit.

Having first come across Sor Juana several years ago, via the sprawling and rather unpleasant novel Hunger’s Brides, I was keen to see what Edmundson would make of her. It would have been easy and unchallenging to make this into a straightforward story of ‘woman oppressed by patriarchy’. But, while that’s true, The Heresy of Love presents us with villains who have principles and heroines who are flawed.

Juana, for all her nobility and intellectual vigour, is naive in thinking that everyone is as rational as she is. Capable of writing plays full of sophisticated understanding of the human heart, she fails to see the needs of Angelica under her very eyes. Amazed by the potential of the human mind, she doesn’t realise that not everyone sees questioning and exploration as a virtue. Some see it as a threat. And by the time Juana does understand this, it is too late. By the same token, the Archbishop is driven by a deep desire to prove himself in an unwelcoming country, and to enforce the virtue and piety that he has seen back home in Spain. Even Santa Cruz, with his soliloquies and his realpolitik, is corrupted by the genuine injustice of being passed over for a job he knows he could have done well.

And these subtleties were brought out further by the actors. Frederick was luminous and forceful, giving Juana a human warmth while showing the firmness of her resolution and the lack of wisdom with which she sometimes deploys her intellect. As her friend-turned-nemesis, Howell made an imposing Santa Cruz: handsome, arrogant and ironic in his monologues, drawing the audience into his schemes and making us complicit even as we longed for him to fail. The supporting cast of nuns and nobles were all strong, with Sophia Nomvete giving a particularly enjoyable turn as Sor Juana’s irreverent servant Juanita; but the prize of the night must go to Keyworth’s Angelica. Skittish, silly and unbelievably innocent, she came across as the Lydia Bennet of Baroque Mexico: the girl who’s still dismissed as a child by all those around her, but who is beginning to know herself as a woman, without yet knowing the trouble that she can unleash. Every time Keyworth bounced onto the stage, I perked up: she was utterly delightful. 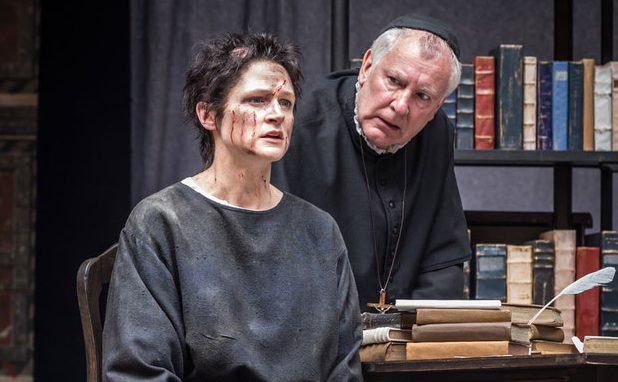 The play itself is not flawless: there were moments, perhaps, when it was trying too hard to make its point, and it didn’t always flow entirely smoothly. That said, it’s thought-provoking and does exactly what you want from a play based on a historical figure: it shows you Juana’s remarkable ability without ever placing her on an unreachable pedestal. It acknowledges her flaws and makes her human. To risk spoilers, her final choice in the struggle with the Archbishop may not be the showy defiance of martyrdom, but it is in some ways a harder choice to swallow: deprived of all she holds dear, forced to deny of the value of what she has spent her life achieving. She succumbs and diminishes herself to fit within the measure of another man’s compass. It was a gentler end than that afforded Hypatia, but it shows that in the course of fourteen hundred years very little had changed in the way that the establishment treated educated women. One would like to imagine that, in the four hundred years since Juana’s death, we’ve made some progress…

If you have the chance to see a revival of The Heresy of Love, I’d recommend it. It might not be entirely perfect, but it’s a fine introduction to the life and legacy of a remarkable woman. You can also buy the play as a text; and of course there are many studies of Sor Juana, but I haven’t read any of them so can’t point to one over another as being particularly good. I’d very much like to know whether anyone else has read anything about, or indeed by Juana, which might be a good place to start for further investigation. I leave you with one more quote from Juana herself:

Is not God, who is supreme goodness, also supreme wisdom? Then why would he find ignorance more acceptable than knowledge?

J. Sanchez, Portrait of Juana Inés de la Cruz at the age of 15 before taking the veil