I suspect Jacky Fleming will hate being labelled with this word, but she’s a little bit of a genius. Her new, tongue-in-cheek book of cartoons takes on one of the big questions of modern society: why is it that there are so many more male geniuses than female? Carefully studying the evidence from the 19th century, and presenting us with the ‘facts’, Fleming embarks on a simple exposé of the downright absurd reasoning by which men have traditionally ‘proven’ that women are the weaker sex.

As this is a relatively slim book of cartoons, there’s only so much that I can say without spoiling the fun for everyone else. However, to put this in context, Fleming delves into the deep mysteries of the gulf that divided the sexes in the 19th century and which still have resonance today. Is it safe for women to collect insects, with the risks this informational overload might cause to their small brains? What about the dangers of riding a bike, or a horse, that might accidentally lead to loss of virginity? How much can a woman study without running the risk of growing a beard, or developing the horrors that are men’s hands or men’s legs? Does it essentially all boil down to the fact that women have been genetically selected not to have genius hair?

Along the way, Fleming gives a roll call of honour to those women who bucked the trend and dared to be troublesome. She mentions Annie Oakley, the sharp-shooter; Anna Maria von Schurman, the brilliant 17th-century German linguist and scholar; Marie Curie, of course; and the mathematician Emmy Noether, who was described as a ‘significant creative mathematical genius’ by none other than that doyen of genius hair, Einstein himself. Fleming gives short shrift to the fact that women mostly appear throughout history as accessories, there to applaud men’s brilliance and look decorative, but never, heaven forbid, to think or challenge or invent. I was delighted to see that Ruskin receives fittingly short shrift for his absurd reaction to his wife on his wedding night: perhaps the clearest indication that the 19th century had a generally unhelpful attitude to women.

This is a fun book with a serious message at its core. Worryingly, some of its comments are still relevant today and Fleming makes a good point that the brilliant women she writes about still don’t show up in history books. This is an attempt to balance the scales, full of humour and insight, but with piquant undertones for those who wish to find them. I can think immediately of two friends who would love this (Jess? Siobhan?) and in fact it’d make a great little present full stop for any troublesome women or enlightened men among you. I love Fleming’s sense of humour and I’ve just read that she also does political cartoons, so she must be absolutely revelling in inspiration at the moment… Highly recommended. 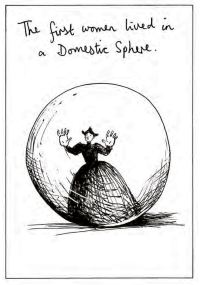