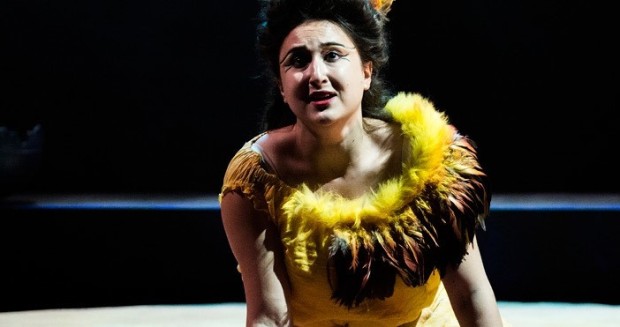 After seeing their impressive Xerxes last year, I was really looking forward to seeing what Longborough Festival Opera would achieve with this year’s Young Artists Production: Alcina. Let’s face it, the one version I’ve seen so far was often striking in the wrong way. And I wasn’t disappointed. Stripping their set back to basics, the company conjured up all the strangeness and danger of Alcina’s enchanted island in a production which, for me, evoked strong parallels with The Tempest. Sung in the original Italian and boasting some fine performances, it was a very welcome counterbalance to the exuberant but somewhat alarming Aix version, restoring ethereal magic to the heart of the story.

For those who don’t recall the plot, the knight Ruggiero has been bewitched by the sorceress Alcina and languishes in sensual abandon in her island kingdom, far from the dust and glory of his martial duties as one of Charlemagne’s paladins. His betrothed Bradamante, a formidable warrior herself, has come to rescue him, accompanied by the powerful wizard Melisso, who hopes to counteract Alcina’s charms. Bradamante is, of course, disguised as a man – passing as her own brother Riccardo – and this proves to be a complication, as Alcina’s excitable sister Morgana is instantly captivated by this dashing stranger. As Bradamante tries to fend off Morgana, and the dangers of the island creep ever closer, she and Melisso discover the hardest truth of all: what if the enchanted Ruggiero doesn’t want to come home? Can they break the spell that holds him?

The set was beautifully simple. A central elevated platform provided the stage on which most of the drama happened, while stands of long grass clustered around it and an illuminated disc hanging overheard acted as the moon. Mist wreathed the grass and, along the back of the stage, poles bore the skulls of horned deer and cattle. It immediately felt haunting and eerie, although it could also become an Elysium, as Bradamante and Melisso found when their arrival was welcomed with silver salvers laden with fruit (and a pig’s head). When the spell is broken, the grasses drift away and the stage is left in its stark, skeletal reality. 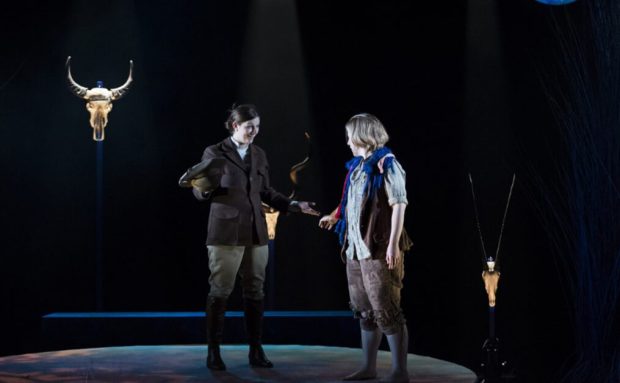 Costumes were a mixture of the fantastic, such as Alcina’s flamboyant feather-trimmed gown, and the vintage: Bradamante is dressed as a tomboyish 19th-century explorer, complete with pith helmet, while Melisso wears the top hat and cloak of a Victorian gentleman in the smogs of London. But the design didn’t stop on the stage. Having only seen two of Longborough’s productions, I hadn’t realised that they have a habit of dressing up their orchestra as well as their cast. Last year, of course, the musicians were all in black tie, but I assumed that was because they were playing on-stage as the band in Xerxes’ club. I’ve now seen from old photos that, when performing Rinaldo, they all had to wear white coats, conical red fezzes and clown face paint and, in this Alcina, they were similarly resplendent in antlers, rustic clothes and bare feet, giving the general impression of forest-dwelling hobbits.

The performances were all generally strong, although naturally I picked out a few favourites. One of those was Lucy Hall as Morgana, whose light, sparkling soprano was shown off to great advantage in arias like her opening O s’apre al riso, where her notes were echoed by violins in the da capo and concluded with a lovely rippling cadenza. If we pursue the Tempest analogy, with Alcina as a sensual female Prospero, then Morgana would be Miranda: young and kittenish, bubbling with excitement at the arrival of strangers on this remote shore. Her Torniamo a vagghegiar, rounding off Act 1, was utterly delightful and devilishly catchy to boot, worming its way into my head while Hall darted around the stage like a baby wildcat.

Freed of his enchantment, Ruggiero (Hanna-Liisa Kirchin) revels in his newfound power over Alcina (Julia Sitkovetsky)

As her sister, Julia Sitkovetsky made a fine Alcina, although she occasionally sounded more vocally suited to belcanto than to Baroque, with a distinct vibrato to her voice. Nevertheless, her voice grew on me throughout: voluptuous, deep and commanding; and she managed to convey Alcina’s mixed emotions: pride and fury at being thwarted, but also a poignant broken-heartedness at the perfidy of her lover. Moving onto the rest of the cast, Melisso (who has very little to do except look wizardly) was played by Matthew Durkan, last seen as Elviro in last year’s Xerxes. I found him amusing then and a solid performer here, though with limited ‘air time’ it was hard to form a good opinion.

In my innocence (and because Oberto was played by a genuine boy soprano in Aix), I was initially blown away by the vocal control of the young lad Longborough had cast, and then I realised that the wonderful voice belonged, of course, to a petite girl, the very admirable Rosie Lomas, who did a great deal with the little Handel gives her. As Bradamante, Anna Harvey had a challenge to live up to the barnstorming performance of Cathy Bell in her Raging Roland recital. However, while I felt her Vorrei vendicarmi and È gelosia could both have done with a bit more flame and fire, I did think her All’ alme fedele was very beautiful. And Christopher Diffey proved to be a particularly virile and forceful Oronte, with the occasional slightly pushed high note, but an otherwise robust and melodic tenor. He also delivered some deadpan comic acting, especially in his Semplicetto!, where he tries to convince Ruggiero of the fickleness of women, with the aid of some of Alcina’s former lovers (now stags) decked out in grass skirts. As ever, a light touch wasn’t far away and this production was all the better for it.

A playful Morgana (Lucy Hall) wrestles with Melisso (Matthew Durkan), who frustrates her efforts to get at ‘Riccardo’, i.e. the disguised Bradamante (Anna Harvey)

I was especially pleased to see Hanna-Liisa Kirchin again. She was one of the participants in a masterclass given by Sarah Connolly at Covent Garden last year: I’d been impressed with her then, and was looking forward to seeing how she’d developed. The answer was that she’s become even more striking. She has quite a dark mezzo, full of strength and expressiveness with lovely warm notes. For me, her voice was much better suited to the role than Jaroussky’s, for all his bell-like beauty. From the off she demonstrated an agile grasp of coloratura and, although Ruggiero initially doesn’t get to do much except stand around looking enslaved, he does benefit from three of the most beautiful arias in the opera. Kirchin’s rendition of Mi lusinga il dolce affetto was gorgeous, full of yearning and exquisite pacing, which held the audience under its own spell for a little while. Verdi prati was equally beautiful, drawing out Ruggiero’s conflicted feelings about breaking Alcina’s power, which will extinguish all the beauty around him on this island.

Of course, with these two arias behind her, I was itching to hear Kirchin’s Sta nell’ircana and she exceeded expectations. Horns were marshalled onto the stage and, despite a bit of a brass wobble here and there, they provided a fabulously military background for Ruggiero to take up his power again. Kirchin translated the meaning into action, prowling around Alcina who, divested of her gown of power, scrabbled anxiously away from this newly resolute paladin. It was a very strong performance and I’m looking forward to seeing Kirchin in more productions in the future. Keep your eye out for her.

I think I still have to learn to love Alcina as an opera – although it has some fine music, it hasn’t yet captured my heart as Xerxes has, and there were moments when this production felt slightly static and long; but they were few and far between. Yet again Longborough has impressed, with a chic, simple production and a talented young cast. Thank goodness they bring their staged show to London for one night a year! Looking forward to 2017.

A lovely informal picture of the cast from Longborough itself: from left (as far as I know who’s who): Ruggiero (Hanna-Liisa Kirchin), one of Alcina’s former lovers turned stag (either William Smith or James Atkinson), Morgana (Lucy Hall), Bradamante (Anna Harvey), Oronte (Christopher Diffey), Alcina (Julia Sitkovetsky), Melisso (Matthew Durkan), Oberto’s father, whose name I have shamefully forgotten, and I’m afraid I don’t know who the singer is, Oberto himself (Rosie Lomas) and another of the ex-lovers-turned-stag (William Smith, James Atkinson)