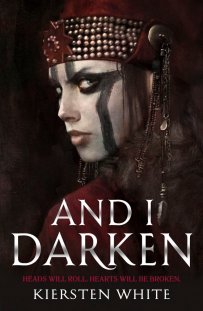 The Conqueror’s Trilogy: Book I

Finding myself without a book to read on Halloween, I tracked down something with appropriately dark credentials. This recent novel, set in 15th-century Wallachia and the Ottoman capital Edirne, promised to do the trick. Aimed at a young-adult audience, it’s a surprisingly enjoyable alternative history, full of harem intrigue, scheming pashas and unspoken desires. And, at its heart, is a plain, vengeful, vicious girl named Ladislav or Lada Dragwlya. In another universe (our own), where Lada was born a boy, she was named after her father Vlad and grew up to become known as the Impaler and to spawn a whole genre of blood-soaked legends. Based on this first novel in a planned trilogy, Lada herself looks set to make an equally indelible impression.

Lada knows from the very beginning that she shouldn’t have been a girl. She wants nothing more than to impress her father, whom she worships, and so she strives to become swift and strong and merciless, always fearing that these qualities will be wiped out by the simple fact of her gender. She’s helped by the contrast between her ferocity and the frailty of her sweet younger brother Radu, to whom she becomes a grudging protector. But then politics change. Her father’s power wavers and he rides to Edirne to ask for help from his overlord, Sultan Murad. But Murad is a shrewd man and Vlad has been an unpredictable vassal. When he returns to Wallachia, he takes the military might of the sultan with him. But he leaves his two children behind in Murad’s keeping.

Nothing will ever reconcile Lada to her exile, but life in the Ottoman empire isn’t all bad. She finds friends among the Janisseries, who take this fierce child under their wing and teach her to fight until she is as formidable and lethal as them. Radu, meanwhile, finds secret comfort in the simplicity of Islam. But both their lives are transformed when they stumble across a boy in a garden one day, who becomes best friend and secret torment to them both: the future Mehmed II, heir to the throne. As the three youngsters grow up, their easy companionship becomes twisted and confused with other things: the need to protect Mehmed from the plots that threaten him; Lada’s enduring thirst for freedom and vengeance on her captors; and Radu’s overpowering longing to have Mehmed one day look at him as he looks at fierce, untamed Lada. They can’t remain innocent forever, and the time is coming when their loyalties and ambitions will be put to the ultimate test. Where should the heart lie? In a beloved, distant homeland, or in the hands of a cherished friend? And, if that friend holds power in the land where one is captive, is he really a friend at all?

It’s an engaging story, slightly heavy on teenage angst, but with an unusually strong female protagonist who refuses to let convention or convenience define her relationship with the world. Those who like to keep things simple have referred to Lada as a ‘gender-swapped Dracula’ and, while that’s historically true, it implies vampiric associations which – at present anyway – I don’t think are on the cards. The Impaler’s life was just as dramatic as his fictional afterlife, after all, and is much less widely known. White doesn’t seem to be setting up a tale of howling wolves in the Transylvanian mountains and exsanguinated peasants. She seems much more interested in exploring what would happen if a capable and fierce woman was born into the society of this very particular corner of the world – nominally Christian, but subject to a Muslim power – and how such a woman might be able to twist that society to suit her. Her characterisation of Lada is impressively rich, as she weaves together the traits of the historical Vlad with the added complications that come of being a woman in a man’s world.

Her treatment of Radu was equally gender-swapped, giving him all the delicacy, sweetness and weakness that would normally be bestowed on a female character. In all fairness, I should note that this approach is entirely justified by the historical record, but it did mean that Radu came across as extremely helpless and wet. While it was good to see the usual gender roles reversed, I swiftly began longing for him to do something more interesting than sobbing, pouting or trying to hug people. Fortunately things picked up when he discovered an adolescent talent for intrigue, and his future promises to be even more interesting, if White follows the events of the real Radu‘s life.

Don’t let my comments disguise the fact that this is a good read, brisk and engaging despite my initial qualms over Radu. Lada herself is a formidable power of nature, a teenage heroine of the kind I’d have loved to read about when I was fourteen or fifteen, red in tooth and claw and devoted to her country above all else. Moreover, it’s a pleasure to have a historical novel set in this part of the world, which has such a rich history and is so underused compared to Renaissance fiction set in Western Europe.

I’m itching to read the sequel and to see where White will take us next – but I’m going to have to wait a long time, because Now I Rise won’t be out until June next year. Patience, alas, is of the essence. Does anyone know of a good biography of the historical Vlad the Impaler that I could read in the meantime to find out more about what really happened?

As a final note, isn’t that cover design wonderful?