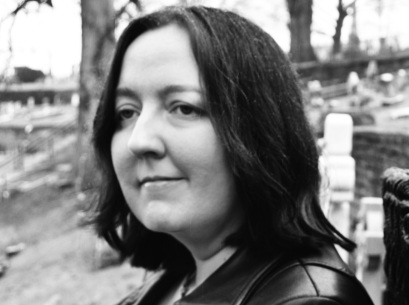 As 2017 simply hunkers down in the bitter cold of winter, I find myself drawn to fairy tales and fantasies: the kind of stories you could tell beside a fire with the storm raging outside. This novella was my first encounter with T. Kingfisher (the pseudonym of Ursula Vernon), an author whose books have often been recommended to me by Goodreads. It’s a retelling of The Snow Queen, which I’ve read many times in my much-loved childhood copy of Hans Christian Andersen’s fairy tales. Smart and knowing, The Raven and the Reindeer delivers up all the magic without any of the piety, a marked glint in its eye.

Gerta and Kay’s grandmothers are the best of friends and the two children, likewise, grow up in each other’s pockets, doing puzzles and listening to the old women tell dark stories of the north. When they’re old enough, they’ll get married, Gerta knows it: Kay is her one true love and they’re meant to be together (Kay, of course, has a rather different take on things and, if pressed, would concede that Gerta was ‘all right, for a girl’). But one night, in the depths of winter, Gerta is woken from a dream by the sound of jingling bells. Peering from her window, she sees an ornate white sled, drawn by giant white otters, alight on the roof of the neighbouring house. In it sits a woman far more beautiful than poor frumpy Gerta will ever be. And Gerta watches in dismay as this woman – the cruel Snow Queen, of whom Gerta has heard stories – charms Kay out of his room and carries him away in her sled.

Gerta is determined to go after Kay to rescue him. Of course she has to rescue him. He’s her one true love, isn’t he? And he kissed her once, even if it was a bit awkward. She’ll find her way to the Snow Queen’s castle, as far north as she can go, and she’ll demand that Kay is returned to her. And so Gerta sets off, with good intentions. But her journey turns out to be just as challenging and exciting as her goal. Along the way she encounters witches, a sarky raven, overly talkative otters, a magical reindeer skin and the enthralling Janna, a robber-maiden with a handy way with a knife. And, as she travels, Gerta grows to understand what she is truly capable of – and begins to wonder whether the life she once envisaged, as a sheltered little girl, is really going to be the life she wants to end up with.

It’s a wonderful update of a fairy tale – more for young adults and grown-ups than for children – preserving all the enchantment but adding in a touch of can-do feminism, along with a more liberal attitude to romantic possibilities. The raven’s snide asides and the burbling glee of the otters are superbly rendered and Kingfisher is terribly good at undermining the traditional earnestness of fairy stories with a vein of humour. It’s as if Hans Christian Andersen has had a run-in with Terry Pratchett. Incidentally, only now do I realise how much C.S. Lewis borrowed from The Snow Queen for his White Witch, though I suspect Kingfisher may also have drawn influence from him in her reworking.

This isn’t a long book – it clocks in at just under two hundred pages – and it might not stay with me for ever, but it was perfect while I was reading it: just the kind of book to make the freezing temperatures seem romantic rather than really, really irritating. I also have Kingfisher’s Bryony and Roses on my Kindle, which is a retelling of Beauty and the Beast, so I can’t wait to see how her irreverent wit and storyteller’s flair will transform that tale.