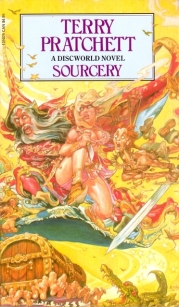 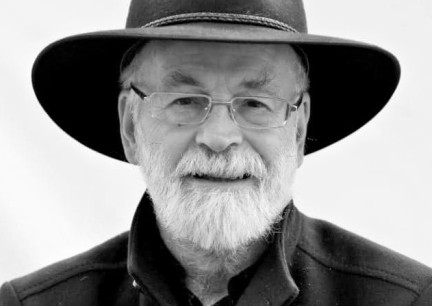 Sourcery was never one of my favourite Discworld novels but, on rereading it, I was struck even more strongly by the sense that it’s a step backwards. Mort pioneered the formula that would make the series so successful: a close focus, a concept borrowed or inspired by those of our own world (for me, Mort has always been akin to The Sorcerer’s Apprentice) and limited, wise deployment of fantasy tropes. Sourcery, by contrast, feels more like The Light Fantastic, linked not only by the presence of Rincewind and the Luggage, but also by barbarians, a wide-ranging quest, magical wars, ambitious wizards and, of course, the End of the World being Nigh once again.

As shown in Equal Rites, the eighth child of an eighth son is a wizard, regardless of its gender. We’ve also been told several times that wizards tend to be celibate, partly because they have enormous difficulty relating to women, but also because it’s the Lore. But why? Now we get to find out. For one rogue wizard, having fled Unseen University and settled down in domestic bliss, has already had seven sons. Now he has an eighth: the eighth son of an eighth son of an eighth son. And somewhere, a door is opened that allows a flood of raw magic into the world, for this makes the child more than just a wizard: he becomes a magical source, a sourcerer. He has the potential to shape and change the world as he sees fit and to challenge the rule of law and nature; he also has the ability to awaken the dozing lust for power of the Disc’s wizards. As the magical potential of the Discworld crystallises in the hand of one dangerous child, the world is about to find out why such stringent rules have been put in place to prevent such a thing ever happening again.

For Rincewind, this spells yet more annoyance. His life was just beginning to settle down and become ordinary, with a position as Assistant Librarian (the Librarian, it should be remembered, is an orangutan). And now, while he was trying to have a quiet pint down the Mended Drum, it’s all gone pear-shaped again. He has been accosted by a staggeringly beautiful woman, half thief and half barbarian adventurer – Conina, the daughter of our old friend Cohen the Barbarian. She has stolen the Archchancellor’s Hat from Unseen University (on the hat’s insistence) and is determined to take it as far away from Ankh-Morpork as possible, to protect it from the sourcerer. Thus, to Rincewind’s irritation, he finds himself forked out of his nice cosy life and sent off on another epic quest, during which he will encounter pirates, fearsome magic, a Grand Vizier and a snake pit, and will finally find out exactly what happens in a seraglio. And, all the time, the end of the world creeps closer. Will Rincewind be able to save the day again?

Pratchett’s anarchic sense of humour certainly gets plenty of page time here, with the Luggage taking on crocodiles and basilisks, and Rincewind thrust into the company of two barbarian companions. One is Conina, of course, and the other is Nijel the Destroyer, a farm boy who’s diligently working his way through a self-help guide on how to become a barbarian. But the book doesn’t flow that smoothly. Moreover, I was underwhelmed by the handling of the female characters. I know Pratchett can write sharp, no-nonsense and witheringly intelligent women, like Susan Sto Helit, Granny Weatherwax and Sibyl Ramkin, so it smarts a little that the women in this book are either Conina – blonde, tanned and buxom – or the ladies in the seraglio – who are wearing small saucepan lids and a bit of lace. Pratchett might well be mocking the limited roles for women in traditional epic fantasy, but he doesn’t have any character here who challenges that stereotype.

Not one of the better Discworld novels, in my humble opinion, but it’s good to have tackled it again as part of the reread. At least I can now see very clearly that this is part of two conflicting trends in the Discworld series and that it represents, perhaps, the last gasp of the epic fantasy trend with which the series started – before the more down-to-earth, subtle and original trend takes over.

Last in this series – Mort

Next in this series – Wyrd Sisters

Some more Paul Kidby goodness, this time showing his take on Conina and the Four Horsemen of the Apocalypse, who make a cameo appearance in this book. 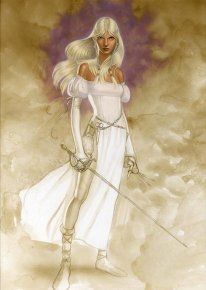 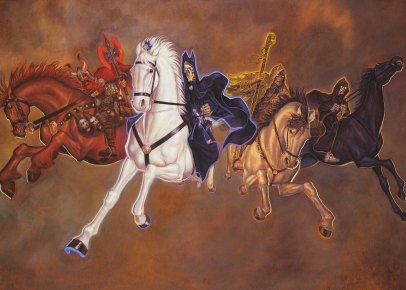