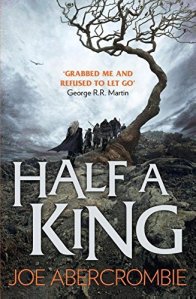 The Shattered Sea: Book I

When I found this book in the library, I decided to spend some quality time with Joe Abercrombie. I’ve meant to read his novels for ages and now, having enjoyed my first taste of alleged ‘grimdark’ thanks to K.J. Parker, and savoured Abercrombie’s short story Two’s Company, I think the time has come. I’d always intended to start with The Blade Itself, but this story caught my imagination right away. A king murdered in strange circumstances. A prince robbed of his throne by a wicked uncle, and sold into slavery. And a ragtag band of galley-slaves stumbling into the wilderness, dreaming of freedom… and revenge. Oh yes. This was definitely my kind of book.

As the youngest son of the King of Gettland, Yarvi has always been a comfortable distance from the throne, and that’s how he likes it. Having been born with a withered left arm and a deformed hand, he’s well aware that he doesn’t exactly confirm to the swaggering, swashbuckling notion of a king. His strength has always been in his wit, and since boyhood he has dreamed of becoming Minister to the kingdom, guiding his older brother with his wise advice. But tragedy strikes. When Yarvi’s father and brother are killed during a peace mission to a neighbouring king, the throne lies vacant. Yarvi’s formidable mother Laithlin wastes no time in strongarming her only remaining son onto the dais, although no one is exactly thrilled to have a king with an obvious disability and a renowned lack of fighting skill. The king isn’t exactly over the moon about it either.

Still, Yarvi would rather be a king than a slave. Unfortunately, that decision is also taken out of his hands when, on his first expedition, he finds himself betrayed by one of the people he most loves. Left for dead beneath the waves, Yarvi struggles to shore and is promptly enslaved, a condition that is only worsened when he’s sold as an oarsman to a merchant galley. It’s a role for which he would have been ill-suited even if both hands functioned properly. As it is, though, he struggles on, supported by his two oarmates – gruff, pessimistic Rulf and towering, sunny-natured Jaud. And, as always, he nurses the dream of vengeance deep within his heart. It doesn’t look like he’s going to have much of a chance to make it reality, though. For now his world has contracted to the walls of this ship, and those who sail in her: the flamboyant captain Shadikshirram; her whip-ready overseer Trigg; the slave navigator Sumael; the corrupt slave quartermaster Ankran; and the wretched deckhand Nothing, the lowest of the low, whom Shadikshirram has cursed to endlessly scrub the decks in punishment for an old rebellion. This, it looks likely, will be the rest of Yarvi’s life. But fate can change. And when, one day, a chance comes for an escape, Yarvi will find himself heading into the freezing wilderness of the north, in the company of a very odd troop of outcasts.

This is a very well-written novel, which provoked a classic case of, ‘oh go on, just one more chapter before lights-out’. But its world-building isn’t necessarily all that original. I noted some pretty strong Game of Thrones resonances, which can’t just be my limited imagination. For example, the Ministers come across as startlingly similar to Maesters (although Abercrombie’s Ministers are usually female). The circular Godshall, with its statues of the six Tall Gods, feels very much like Baelor’s Sept. The Black Chair, throne of the Kings of Gettland, forged by ancient hands from metal, insisted on appearing in my mind as a less prickly Iron Throne. And Yarvi himself, with his sharp mind and physical difference, isn’t a million miles away from Tyrion Lannister, everyone’s favourite cynic. There’s also plenty of scheming. In fact, the best way I can describe it is to say that it’s a bit like Westeros meets Middle Earth with added Scandinavian elements. Fortunately this is a self-evidently awesome mixture, and Abercrombie is a strong enough writer to draw you swiftly and deeply into his world, luring you in with a fast-paced plot, deftly-drawn charcterisation, dark humour, and a nicely morally-ambivalent protagonist.

If this is ‘grimdark’, then I think it’s definitely my kind of genre. It isn’t relentlessly dark but nor is it cheerfully implausible. This is the kind of world where betrayal happens, where the stakes are genuinely high, and people die. It is a thoroughly gripping read. With a few tweaks, the story would make a magnificent Icelandic saga, and it clearly isn’t over yet. I’ll be tracking down the rest of the story very soon, I hope.