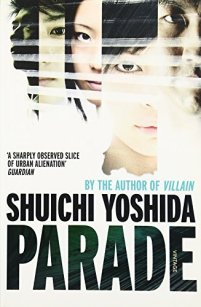 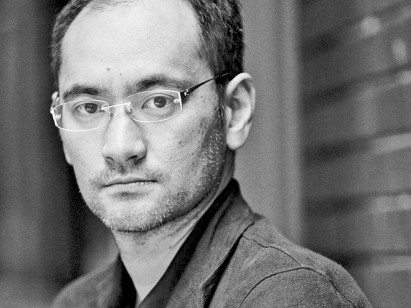 My journey through faintly baffling Japanese fiction continues. I stumbled across this novel in the library, having decided to explore backwards from Z for once, and it caught my eye with its promise of an insight into the dislocation and atomisation of modern Japanese society. And yet, once again, it has turned out to be one of those books that I suspect Heloise has the patience for much more than me: a study of the pointlessness of contemporary life, and the strange dynamics of communal living.

In a small apartment in Tokyo, four flatmates have built up a delicate modus vivendi. Brought together by chance, they hang out, watch films, eat takeaways and give life advice to one another, but without ever revealing their true selves. Some are strivers, some wasters: a characteristic mixture of millennial types. One by one, they take over the narration of the story, offering us the chance to glimpse their inner lives and the way that they are both reliant upon and dismissive of their flatmates. Ryosuke (aged 21) is studying economics at H University and making ends meet during the holidays by working as a (somewhat lacklustre) chef. And yet his thoughts are occupied not by economics, not by cooking, but by Kiwako, the beautiful girlfriend of his successful college friend Umezaki. Kotomi (aged 23) has come to Tokyo on the trail of her sometime boyfriend Tomohiko Maruyama, an actor who has become one of the hottest young heartthrobs of the day. Focusing her whole life around Tomohiko, she spends her days waiting by the phone, trimming her hair and watching dismal reruns of TV soaps.

If Kotomi’s life is visibly defined by its pointlessness, her flatmate Mirai (24) is not waving but drowning in a more dramatic way. Usually to be found whiling the nights away in gay bars and drinking holes, Mirai has an uninspiring job and longs to make a living selling her illustrations. Her desires, such as they are, are channelled into dark fantasies that she keeps secret from her flatmates. And then, finally, there’s Naoki (28), the eldest and most responsible of the group. With a steady job at a film company, and an on-off relationship with his old flame Misaki, Naoki has become the point of reference for his younger flatmates, who use him as a source of advice and reassurance. But Naoki himself is struggling with a need to give meaning to his life – to leave a mark, however that may be. These are the four mismatched, self-obsessed, aimless young people with whom we spend the book – and yet there’s one more character, who comes into their midst like a shadow and is drawn in to their strangely calibrated world. This is Satoru (18) who, in the absence of other choices, makes his living on the street and, despite his youth, is more streetwise and shrewd than his better-off flatmates.

And so the book quietly unfolds, following each of the characters in turn as they deal with the essential aimlessness of their lives. They try to create drama by theorising about the activities of their mysterious neighbour, while around them the grim realities of the wider world barely seem to touch them: the car accidents at the nearby junction are nothing but a strange fascination, while the spate of attacks on women in the local area are less important than the mythologies of their own lives.

The characterisation is strong, in that you do come to know these five young people, all of whom are thoroughly convincing if not remotely sympathetic. But the book subverts expectations, turning its potential denouement into an anticlimax, and leaving many questions unanswered. Like so much Japanese fiction, actions are often described rather than the motivations behind them, and elements which in other books would be the driving dramatic factors here shrink to inconsequential sidelines. It’s a curious style – less quirky than Murakami; less angry than Kirino – but one that has its own strange appeal. Personally I find it hard to warm to books in which so little happens, but I know that many other people find them more engaging intellectually, and so it would be well worth seeking this out if you enjoy meandering, musing, character-heavy tales. (Yes, Heloise, I’m looking at you. I’d love to know what you make of this.)

I have another Japanese novel lined up soon: the high-profile thriller Six Four, which I’m hoping will prove to be a little more gripping and eventful. Incidentally, has anyone read Yoshida’s other novel Villain, which is mentioned on Parade‘s dust jacket?