As you may have noticed, I’ve been making a real effort to watch more world cinema recently, and Amazon obligingly recommended this award-winning Polish film, which tackles the dark no-man’s-land between faith and desire. Brooding and often bleak, it focuses on Adam (Andrzej Chyra), an energetic priest who has been posted to an out-of-the-way parish in the middle of the countryside. Blessed with a talent for dealing with troubled teenagers, he has set up a residential centre for young offenders, in whom he attempts to instil respect for faith, discipline and obedience. In parts it’s oddly disjointed, but the film lingers for its stark and unsentimental view of life in the countryside, as well as its steadily thickening brew of unspoken longing and confusion.

Nothing is really explained the film. You have to find your way through a sequence of vignettes which give you a glimpse of what Adam’s everyday life is like. He preaches to his small but attentive congregation in the parish church; he and his assistant Michal (Lukasz Simlat) channel the boys’ aggression into football matches and swimming trips; they patiently work to install good table manners into the boys at dinner; they give the boys a way to feel useful by breaking stones and building walls for the villagers. In the evenings, Adam cooks for himself and retreats to bed, where we finally see him stripped of his public face – just a man, lying in the dark, wondering what the point of it all is.

Beneath the surface of this conservative community, emotions are bubbling. Michal’s neglected wife Ewa (Maja Ostaszewska) develops a crush on his appealing new colleague and begins lingering around Adam’s house, supplying him with pies and home cooking for the church lunches. Intelligent and compassionate, Adam deals gently with her, conscious of his duty both to his colleague and to God. But is it only willpower that keeps him away from her? Among Adam’s parishioners, there’s the taciturn, watchful Lucasz (Mateusz Kosciukiewicz), a young farmhand used to defending his mentally disabled brother, who has now appointed himself guardian and shadow of the inspiring new priest. Meanwhile, the boys at the centre hide their sensitivities beneath bravado and insults, but the arrival of a new addition to their number – the spiteful, swaggering delinquent Blondi (Tomasz Schuchardt) – proves to be the spark that lights the tinder.

Some of the reviews I’ve read of this film note with interest that the director is a woman. Critics have wondered if Szumowska has been able to deal with this complex stew of male desire more easily because she is detached from it. That seems a little simplistic to me: surely it’s just the fact that Szumowska is a sensitive, evocative director who allows her characters to speak – or, more commonly, to look – for themselves? She creates a world where tenderness is rare and where vulnerability can be expressed only in private – a world in which scenes can often be read in multiple ways.

When Lucasz turns up on Adam’s doorstep beaten, covered in blood and with a broken nose, what does it mean? Is he afraid to go home to his mother in this state? Has he come, like a child, to seek solace from the one person he knows will be kind to him? Or is it a wordless display of his loyalty to Adam? Who has he been defending in this fight? His brother, or Adam? Similarly, when Lucasz shyly asks Adam to teach him to swim, the scene can be read as a straightforward lesson, or an excuse for physical contact, or even a visual allusion to immersive baptism.

The film rests on the strength of Chyra, playing Adam, and he gives a nuanced and very sympathetic performance. We see his desire to do good, but also the struggle going on behind his eyes. There is no judgement and no sensation. It’s only as the film goes on that we become aware of the extent of Adam’s inner loneliness: his awareness of what he has given up in order to do what he believes is right, and his frustration that, despite his sacrifices, his superiors feel the need to keep disrupting the life he has made for himself. Occasionally the absurdity breaks through – his vodka-fuelled dance with a portrait of Pope Benedict XVI, for example – but Adam’s faith is strong enough to endure. One of the most moving scenes is the procession, late in the film, showing the emotional intensity of his involvement with this parish and his conflicted feelings about his next step. It’s a moving story, not always hugely optimistic, but ultimately offering the possibility of hope. (Like many people, though, I was baffled by the final scene at the seminary. Maybe we can discuss that in the comments if anyone else has seen the film.)

This isn’t upbeat and is very much an art-house film: not something I have a burning desire to see again, but made well, with excellent performances from the main actors. Do not let yourself be influenced by the reductive, tabloid-like descriptions of the film that you see in many reviews. It’s much more than that: a sensitive exploration of self-abnegation, made without an agenda and with great humanity. 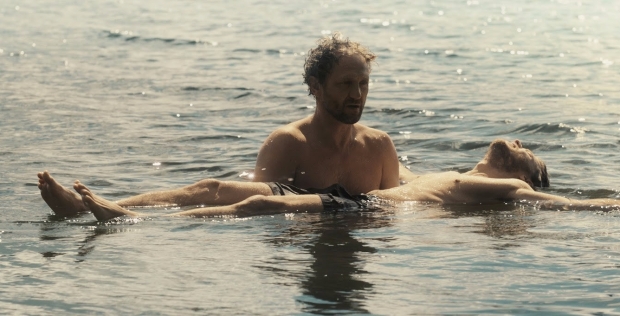