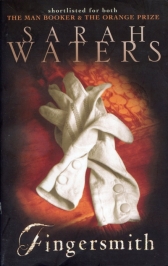 As the kind of person who likes to read the book before seeing the film, I was keen to read Fingersmith before the related Korean period drama The Handmaiden comes out on DVD. I’d held off reading it so far because it was the only Sarah Waters novel I hadn’t read and I was saving it as a treat. She’s a magnificent creator of character, atmosphere and dramatic tension, and all those qualities are present and correct in this dark, unexpectedly labyrinthine tale of secrets, schemes and lies in Victorian England.

It’s 1862 and Susan Trinder, known to all as Sue, has spent all her seventeen years in the Borough in London. Orphaned at a young age, she has been raised by the baby-farmer Mrs Sucksby and by her partner, the locksmith and fence Mr Ibbs. In this world of cons, thieves and tricksters, Sue has a reflected glamour as the daughter of a convicted murderess and has always enjoyed a certain status in this makeshift family, where Mrs Sucksby treats her almost like her own child. Sue has always been kept away from the worst of the lawbreaking that goes on, but one day she’s offered the chance to take part in something on her own account. The suave, well-born trickster known as Gentleman comes to the Borough with a striking proposal – and he needs Sue’s help.

Gentleman has found a ripe target waiting to be fleeced in the provinces. An old scholar, a committed recluse, has a pretty niece who stands to inherit a fortune on her marriage. Gentleman believes that he can wheedle his way into the lady’s affections, win her hand in marriage, and then have her neatly committed to an asylum while he absconds with the profits. But, to pull off the scheme, he needs an accomplice. And so he proposes that Sue take on the role of a lady’s maid, to gain this young innocent’s confidence, and to speak in favour of his suit. For Sue, leaving London is like going to another planet, but she agrees on condition that she has a healthy cut of the takings. And so off she goes, to take up her place at the grim, isolated house called Briar, and to serve poor, naive Maud, the target of Gentleman’s schemes. But as the two girls spend time together, Sue begins to feel her heart softening towards Maud. Can she really let Gentleman carry out his plan?

This is a glorious book, because it doesn’t go at all where you’re expecting it to go and is crammed to the brim with twists and turns. I haven’t said anything here that will spoil it for you. Waters, as ever, creates rich and believable characters: women who are by turn soft, bolshy, devious, brave and fierce. The heightened tone of the novel has more than a slight air of Gothic melodrama about it, but it’s immensely enjoyable as you find yourself facing villains who are truly dastardly, and a heroine who refuses to allow herself to be crushed by circumstances. Nor is it as overtly sensual as some of Waters’s other works, placing its emphasis on trust and loyalty rather than on lust. All in all, it’s a deliciously over-the-top tale, probably the sort of thing that would be perfect for a dark winter night and firelight (trust me to have read it in the warm days of summer).

Having now finished the novel, I’m itching to see how all of this will be translated into a Korean historical context. I’ve heard good things about The Handmaiden from a couple of people who’ve seen it, so it must be a success. Has anyone else seen it yet? If so, what did you think of the adaptation? Did any of you see the BBC adaptation? (I haven’t.) Please do share your thoughts, but please also be careful about giving away any of the plot twists if you do comment, as I’d hate to ruin it for other people.