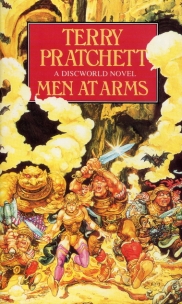 Sam Vimes is having a bad day. It isn’t that he’s hungover, as he was last time we met him in the opening pages of a novel. It’s worse than that. He’s about to get married. Not today, you understand, but soon enough that it’s unavoidable. And it isn’t that he has concerns about his bride-to-be. On the contrary, Sybil Ramkin sweeps all before her with the gusto of a migrating glacier and Vimes isn’t strong enough to challenge her. But he’s worried about what marriage will entail: hobnobbing with aristocrats, whom Vimes loathes, and who he knows perfectly well loathe him; losing his sense of identity; and, worst of all, giving up his place in the Watch.

For Vimes loves the Watch. Even on days like today, when they’ve been forced into hiring with quotas for Equal Opportunities; when the Patrician is being even more sarcastic than usual; and when some bugger has stolen something from the museum of the Assassins’ Guild and is on the loose murdering innocent Ankh-Morporkians. Well, clowns, actually, from the Fools’ Guild. In order to track down the murderer, Vimes and the dauntless Corporal Carrot have to call on all their wits and courage, as well as that of their (not particularly) dauntless colleagues: Sergeant Colon; Corporal Nobbs; and the members of their new intake: Lance-Constable Cuddy (a dwarf), Lance-Constable Detritus (a troll) and Lance-Constable Angua (a w…woman).

As you’ll see, we also encounter some familiar faces from beyond the Watch: Detritus, whom we last saw working in Holy Wood in Moving Pictures; and Gaspode, formerly the Wonder Dog, from that same novel; not to mention cameos from Ridcully and the Bursar of Unseen University. As the characters focus their search on the missing ‘gonne‘ from the Assassins’ museum, Pratchett has the chance to riff on various subjects: fantasy tropes about long-lost kings reappearing to claim their thrones; racial tensions; and the sacrifice of independence that comes even with the best-intentioned of marriages. He treats these with a wonderfully light touch, as always, often revelling in the absurdity of a situation even as he makes apparent its hidden poignancy.

Vimes and Carrot are two of my favourite Discworld characters, along with the Patrician, and it was great to spend some more time in their company here. They are so wonderful because they occupy the same physical space and yet each of them has such a different feel to them: I always think Vimes feels as if he’s wandered out of some brooding film noir, while Carrot surely comes from some upbeat Disney universe where everyone is fundamentally nice and good and ready to break out into song. I was also tickled to realise this is the first book in which we meet the reclusive genius Leonard of Quirm, whom the Patrician keeps in careful but spacious imprisonment, and who spends his time inventing such useless things as bicycles and flying machines. We’ll be seeing more of him further down the line. Recommended either as a direct follow-up to Guards, Guards! or in its proper place in the series, this is classic Pratchett fun.

More Paul Kidby goodness, this time showing a group shot of the Watch and a portrait of Lady Sybil Ramkin with one of the dragons she cares for at her sanctuary.

Paul Kidby, The Unusual Suspects. This dates from a later book than Men at Arms, with a few Watchmen who don’t feature here, but you can see (seated centre) Vimes flanked by Carrot (left), Colon and Nobby (right), with Angua standing behind Carrot’s shoulder and Detritus at back right © Paul Kidby