When I was eleven, I was obsessed with ponies and still spent an unconscionable amount of time playing with dolls. When Mozart was eleven, he wrote his first opera. Such is life. In this concert, Classical Opera presented three pieces written by the precocious composer between 1766 and 1767, which predictably sounded as rich and sophisticated as many a work by any other mature composer. Staged simply and effectively, with some impressive performances from the crack team of singers, these pieces were the ‘Lambach’ Symphony in G major (K45a), the sombre Grabmusik (K42) and the little opera Apollo et Hyacinthus. As there were three different pieces, I’ve treated this as a recital, which is why I haven’t given it the usual star rating.

The earliest of these pieces is the ‘Lambach’ Symphony, so-called because the score comes from the Lambach Monastery in Upper Austria. The symphony was written as a gift for the monks, along with another symphony by Mozart’s father Leopold, as thanks for the hospitality they’d enjoyed on their frequent journeys from Salzburg to Vienna and back again. The first movement already sounds typically Mozartian, despite having been written by a child who was at the time only ten years old, brimming over with spirit, before dipping into a low rumble of strings and horns, suggesting a swell of foreboding. The second movement, which has apparently been the focus for doubts over the music’s authorship, is comparatively uneventful, and I was especially distracted by Classical Opera’s decision to begin the staging here, with a sombre train of black-clad figures crossing the stage in slow motion. As I’d see, it set things up nicely for Grabmusik, but at the time it felt slightly unnecessary. Fortunately the music came back with a bang in the third movement, bubbling with vibrancy and ending on a definite high. 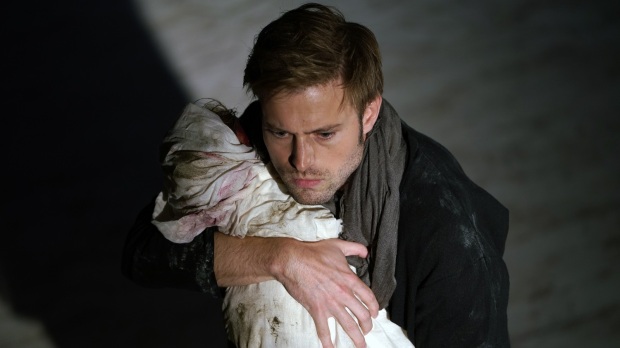 I always get distracted by writing about singers at this kind of thing, so I must take a moment to say how beautifully the orchestra of Classical Opera negotiated the different moods of the evening’s performance. When they were caught up in a presto or allegro, they sparkled with panache; for the adagios they were softer, gentler. I thought I heard a couple of wobbles from the horns, but this was a rarity: they were otherwise completely taut and precise under the expert baton of Ian Page.

The Grabmusik (literally ‘Grave-Music’) dates from early 1767 when, according to legend, the prince of Salzburg began to doubt that Mozart’s work could really be that of a child and locked the eleven-year-old Mozart up for a week, accompanied only by paper and the libretto for an oratorio. Quite apart from the ethics of imprisoning a young boy, the prince’s experiment bore fruit: Mozart proceeded to write a wonderful oratorio which is usually thought to be the Grabmusik. It’s an incredibly powerful piece, focusing on the torment of the Soul as it contemplates death, and its eventual pacification through the gentle succour of an Angel. Needless to say, it was the first part that I admired most.

There are only two singing roles in the Grabmusik and the Soul was performed by the German baritone Benjamin Appl, who was quite a revelation. His agony was given a focus in the form of a tiny cloth-wrapped bundle, the size of a child, which he snatched back from the tomb and cradled in his arms, trying to understand the cruelty which cuts off the thread of life. His opening aria was astounding. I didn’t get all the lyrics scribbled down from the surtitles (the oratorio is in German) but those I did will give you a feel for it: ‘Mountains, claw your jaws asunder!‘ he cries, going on to tackle some wildly ambitious coloratura for a baritone – and doing damn well with it. Appl’s dramatic expression was super and the fury with which he sang out his final incantation to ‘lightning, storm, hellfire‘ had something of the fury of Don Giovanni‘s final scene. Moving through a crowd of black-clad, blind and eerie figures, this Soul was furious, seeking for a reason. 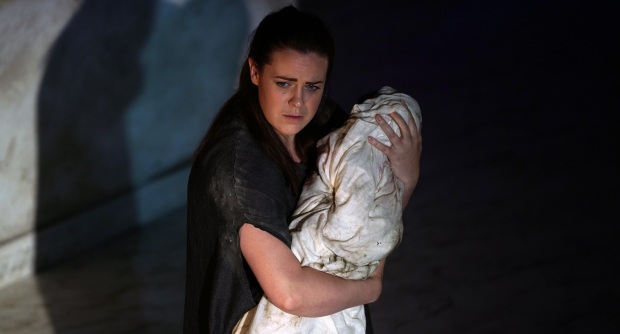 That reason appeared courtesy of Gemma Summerfield’s Angel. Her warm soprano burnished her lovely aria, deliberately contrasting the frenzy of the agonised Soul with the gentleness of the knowing spirit. As she urged, ‘Surrender, hard heart‘, she carried off a gorgeous trickle of notes, and her ‘only repent‘ was an invitation rather than a command, full of compassion and love. The final duet between Soul and Angel was full of the sweetness of forgiveness, the two voices weaving together at the end, and the staging of the oratorio finished with the hugely poignant sight of the Soul saying goodbye to the tiny swaddled bundle he had been protecting, and giving it up to God. Intensely religious and yet powerfully dramatic, it moved me in ways I wasn’t expecting it to.

Apollo et Hyacinthus took over after the interval. Written when Mozart was eleven, for an end-of-term performance at the Benedictine University in Salzburg, it’s based on a Latin libretto by Rufinus Widl, the Professor of Syntax at the university. Professor Widl was obviously very conscious of the need to improve the morals of Greek mythology. In his hands, the tale of Apollo and Hyacinthus – an emotional story of homosexual love and jealousy – is neatly bowdlerised. Here, the only hint of illicit feelings are those of the unstable Zephyrus (James Hall) for the virtuous Hyacinthus (Gemma Summerfield again). When Hyacinthus’ father, the Spartan king Oebalus (Benjamin Hulett) calls down the god Apollo (Tim Mead), it isn’t the beautiful boy who catches Apollo’s eye but his hastily-invented sister Melia (Klara Ek). During the course of three brief acts, each more like an intermezzo than a true opera act, the god’s swaggering favour drives Zephyrus to shocking extremes. He murders Hyacinthus during a game of discus, pins the blame on Apollo and is then punished for his blasphemy. Melia, who believes that her brother has been slain by her divine fiance, shows her best miffed princess face to Apollo, but later apologises and is forgiven by the magnanimous god, who takes her to be his wife.

Once I’d got over my initial muttering (‘That’s not right: that’s not how the myth goes’) and settled down, I thoroughly enjoyed the performance. St John’s Smith Square isn’t the easiest place to stage a production, but gauzy curtains on each side of the stage formed a mock proscenium arch (as well as providing a gorgeous dramatic moment when they came to life as the Winds, to whisk Zephyrus away to his punishment). Sound effects were provided by Baroque-style machines like those I saw recently in the Teatro della Pergola: a wind machine and thunder sheet, both employed to excellent effect to evoke the storm of the god’s anger. And the singers were generally extremely good, singing in Latin with such fluency that it sounded more like Italian.

You know, I sat there for the entire thing thinking that Benjamin Hulett was rather good and trying to remember where I’d seen him very recently, and it’s only now that I’ve realised that he was of course a wonderful Arbante in Hipermestra. (It’s hot: forgive me.) He was no less impressive as Oebalus, with a relatively small part but one full of emotion. I very much enjoyed the aria he sings as he kneels over the broken body of his son: essentially a storm aria, comparing Oebalus’ spirits to ‘a ship tossed on hills and vales of sea‘. Each of the characters had one aria, so it was a good chance for all the singers to have their moment in the sun. I was impressed by James Hall as Zephyrus: this music suits his mellow voice. I liked his petulance, the warmth of his voice, and his habit of staring at Hyacinthus with all the soulfulness of an ignored Samwise Gamgee.

Gemma Summerfield’s Hyacinthus was more robust than her Angel: he was a good-natured, wholesome, gods-fearing boy who loved his father and had no time for Zephyrus’ moping around. He had the benefit of the first aria, Saepe terrent Numina, which was defiant and comforting both at once, and which was so fun that it almost made up for the fact he had very little else to do afterwards and, indeed, died at the beginning of the third act. Much of the really good music goes to Melia, sung here by Klara Ek, who did a terrifically good job with the virtuoso coloratura of Laetari, iocari, which I swear I’ve heard somewhere before, and is the kind of tricky aria that only Mozart could write. The final member of the line-up was Apollo himself, embodied here by a suave Tim Mead, who carried off the acting of the role with aplomb. I still don’t love Mead’s voice as much as some others do, but thought he performed well across the emotional spectrum from infatuated romantic to infuriated divinity. It’s also true that much of Apollo’s impact comes from his physical presence in this oratorio and Mead did a very good job – down to the final scene where he makes Hyacinthus’ body magically disappear (an impressive sleight of hand, though made somewhat absurd by the implied exchange: ‘Your son is dead. I’m sorry. Have a plant’).

It’s very hard to believe that Mozart was so young when he wrote these three pieces, all of which seem to demonstrate such maturity of expression. It was wonderful to hear them and I do hope that Classical Opera plan to continue chronologically so that we get to experience more of these rare early pieces. They have, of course, also released a CD of Apollo et Hyacinthus, though the cast is almost entirely different, with the exception of Ek as Melia. On the CD, Oebalus is played by Andrew Kennedy; Hyacinthus by Sophie Bevan; Zephyrus by Christopher Ainslie; and Apollo by Lawrence Zazzo. Obviously I’m going to have to buy that in due course, just to compare and contrast…

Find out more about Classical Opera 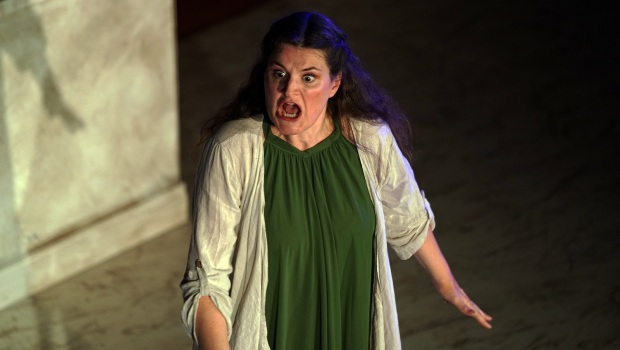 Melia (Klara Ek) in a temper. Even the gods can’t stand up to a Baroque miffed princess