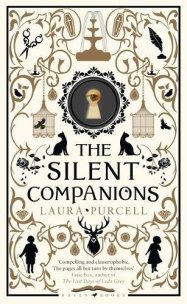 When a young widow travels to her dead husband’s family home, after only a few months of marriage, she believes that her greatest challenge will be in mastering her grief. But The Bridge is an unsettling place: a rambling old house, unloved and worn, with a meagre staff of taciturn servants and a history of unpleasant accidents. This is a Gothic tale of a slow, creeping kind, best savoured on a dark winter’s night beside the fire, in which supernatural events sit side by side with very real social tension.

Elsie is always conscious of her background. Before marrying her husband, Rupert, she worked with her brother Jolyon in the family’s match factory, and she imagines that the servants at The Bridge must be expecting better. However, when she arrives at the house, she finds only a handful of half-trained maids and a housekeeper who clearly knows more about The Bridge’s history than she cares to share. Elsie must settle into her role as mistress of a grand (if ramshackle) establishment, and get used to the presence of her husband’s cousin Sarah, a well-meaning but lacklustre companion. But there is something about the house that unsettles her. Strange sawing noises come from the garret late at night, and drifts of sawdust appear on the floor; but the garret door is stuck. When Elsie and Sarah finally manage to force it open, they make a startling discovery: once which will shed new light on the family’s history, and bring a long-forgotten evil back into their lives.

Purcell keeps the pace of the novel just right, allowing the foreboding to bubble up between the lines and playing on the fundamental creepiness of the ‘silent companions’ of the title. If you’ve visited an English stately home, there’s a good chance you’ll have seen one of these wooden cutouts – I remember there being one or two at Dyrham Park, where I used to go as a little girl. Funnily enough I wasn’t really disturbed by them before, but things might be a little different now. Elsie’s story sits alongside two other plots: the tale of a burned, mute woman being treated in an asylum; and the diary of a woman from the mid-17th century. I won’t say any more to avoid giving spoilers, but all three tales weave together very neatly, full of familiar horror motifs: the silent, calculating child; the unsettling nursery; and the vast, dark, ancient house. And Purcell is particularly good at gradually revealing her characters too us, inching out the information so that events take on different perspectives at different times. What do we actually know and who should we believe?

I should add that I don’t read horror, because I’m a wimp and am easily scared, and so hard-core horror readers might find this a bit quaint and ineffective for their tastes. But for the rest of us it’s a subtle, uneasy story set in that perfect moment at the end of the 19th century when tradition is morphing into innovation, when the railway and the factory sit side by side with the landed gentry, when folk belief lingers alongside scientific rationalism… It’s a good, solid read with a clever conclusion, and perfect for those who like a bit of ghostliness to spice up their TBR pile.