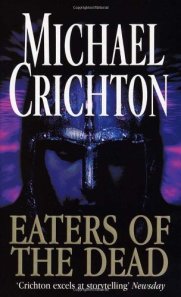 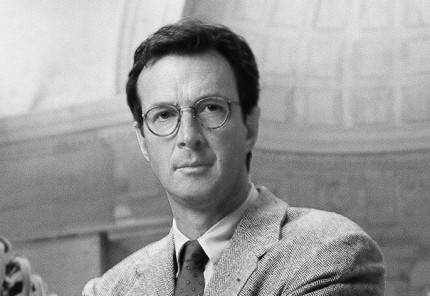 We all know not to judge books by their covers (even if we still do it), and this is a very good example of why it can be dangerous to do so. Both title and cover suggest this is a gruesome horror story. A quick glance at online reviews shows that some readers have been (legitimately) baffled to find themselves, instead, reading a pastiche of an academic text edition, complete with introduction, footnotes and bibliography. They’ve responded with low ratings and that’s a shame, because this novel is a daring blend of fact and fiction: a pseudo-intellectual sleight of hand which playfully offers a historical ‘source’ for the greatest of Western medieval legends: Beowulf.

This is one case where it’s important to know what you’re getting into, because you can appreciate what Crichton’s doing much more easily if you know his intentions. I broke my usual rule and read the afterword first, and this helped enormously. Crichton frames his tale as a new edition of the writings of Ibn Fadlan, the 10th-century Arab traveller who really did travel among the Scandinavian peoples of the Rus’. Indeed, the first three chapters are largely copied from the absolutely authentic Ibn Fadlan text edited by Richard Frye. Adopting Ibn Fadlan’s own detached prose style, Crichton adds new episodes to the traveller’s tale – blurring the lines where the original text ends and his own fantasy begins, and setting out a tantalising tale of heroes striving against a dark, mist-borne evil which threatens a king’s mighty hall.

The young Ibn Fadlan is sent from Baghdad on a diplomatic mission to the King of the Saqaliba (literally ‘Slavs’, referring to a kingdom on the Volga). He and his company travel steadily northwards, through the lands of the Oghuz Turks, and on to the banks of the Volga, where Crichton departs from his source and Ibn Fadlan encounters a Norse warrior named Buliwyf. He is one of two claimants to the throne of the local chieftain, who is mortally ill, but his struggle for the succession ends abruptly with the arrival of a messenger from the north. This young man tells the story of King Rothgar, whose hall at Hurot is cursed with a great evil, and begs for aid from Buliwyf. The hero chooses twelve warriors to accompany him to fight this threat from the ‘black mist’, one of whom is the frankly unwilling Ibn Fadlan. His journey deep into Scandinavia will furnish him with plenty of material for his writings, but will also require him to use the sword as freely as the pen – and will challenge everything he thought possible.

Crichton’s story is based on one thought-provoking ‘what if’, which I won’t give away here because it’ll spoil your own dawning sense of realisation (unless, of course, you read the afterword first, because that spells it out). This is the first book I’ve read by him, but of course I’ve seen Jurassic Park, and that uses a similar concept: a chance survival, or revival, entirely undermining our concept of our place in the world as humans, and potentially posing all manner of ethical and evolutionary issues. In Eaters of the Dead, he captures the detached, almost anthropological tone of Ibn Fadlan’s writing, which makes the tale almost more disturbing for its matter-of-fact quality. And, like Jurassic Park, the idea is just plausible enough to stick with you. I thought it was very clever, and I hugely enjoyed the footnotes and bibliography, all of which Crichton warns us (in his afterword) to beware. A provocative and thought-provoking little book.

Like many people, I came to the book having already seen the 1999 film which was based on it, The 13th Warrior. I don’t remember it being particularly good, although I watched it back in the mists of time when I was fourteen and going through my Antonio Banderas phase, so I may not have been wholly focused on the subtleties of the story. However, much of the book’s appeal is in its faux-academic form, and I imagine the film got rid of that aspect and turned it into a simple adventure story. Has anyone seen it recently enough to offer a comparison to the novel? For those who fancy reading Ibn Fadlan’s original text without Crichton’s additions, Ibn Fadlan and the Land of Darkness, translated by Lunde and Stone, seems to be regarded as a very good place to start. It also includes accounts from other Arab travellers who visited Northern Europe between the 9th and the 14th centuries. I haven’t read it yet, but it’s certainly on my list.