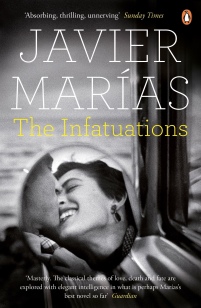 I’ve wanted to read one of Javier Marías’s novels for ages and this has been quietly sitting on my shelf, waiting. It’s a story I heard about years ago and which captured my attention: a young woman, breakfasting every morning in the same Madrid café, has become accustomed to seeing a married couple there every day at the same time. They are so much in love, so deeply connected and content, that she shyly adopts them as an ideal. But then, one day, they fail to appear and our narrator María reads with a shock, in the papers, that the man has been murdered in a senseless attack. Due to her fondness for them – her infatuation, perhaps, with the idea of them – she can’t leave it there. Now, given my high expectations for the book, I was a little disappointed. It wasn’t quite what I expected: more detached, more intellectual; a philosophical analysis more than a mystery. And the story’s several infatuations manifest themselves not as glorious passions, but as states of mind that can drive us to accept terrible situations as the norm.

The thing which attracts María Dolz to the couple in her café (the Perfect Couple, as she christens them) is that they seem entirely complete in and of themselves. They never seem to weary of one another. Although they have children and have clearly been married for many years, their relationship has a compelling freshness and vivacity. For María, who works in a frustrating job at a publishing house and who has a string of half-hearted encounters with unmemorable men, they represent everything that life should be. And so the sudden, inexplicable death of the man affects her deeply. One might imagine how this story is going to go: that María somehow infiltrates herself into the life of the widowed woman, Luisa Alday, trying to absorb some of that painful lost perfection. But it doesn’t quite work like that. María certainly does introduce herself, and is delighted to realise that Luisa and her late husband Miguel Desvern noticed her too – that, indeed, they nicknamed her (the Prudent Young Woman). But María’s connection with the bereaved family is to be more tenuous, through the murdered man’s best friend, Javier.

This isn’t really a murder mystery. The death of Miguel Desvern is its main event and driving force, but I can best describe it as the bolt upon which Marías screws the nut of his story. It’s a meandering, occasionally self-indulgent series of speculations on the ethics of love and loss: how we should behave; what love permits; how the loss of bereavement compares to the loss of a lover through abandonment. Javier, the best friend, is especially given to ‘speechifying’, as Marías himself calls it, and a good portion of the book consists of his rambling self-justifications. Certain references keep surfacing: Macbeth’s reaction to the death of Lady Macbeth (‘She should have died hereafter’; and much rumination on what ‘hereafter’ actually means); an obscure novella by Balzac, in which a soldier presumed dead returns to his old life to find no place left for him (Colonel Chabert); and Athos’s judicial murder of his wife Anne de Breuil in The Three Musketeers, only to see her reappear as Milady de Winter. When Javier isn’t talking, María spends long scenes reconstructing events by imagining scenes and dialogues, spurred on by her imaginary participation in this tragic story.

This was not the ideal book to read in my present circumstances but, by the time I realised that, it was too late. Take María, our narrator. Her self-esteem is cripplingly low and she clings to the ‘relationship’ she develops with Javier, even though she knows she is being taken advantage of, that her feelings are not returned and that, as soon as things stop being convenient for Javier, he will simply rub her out of his life. Her infatuation with him allows him to treat her with an arrogance that diminishes her in turn, and which makes her even more bitter, as she resigns herself to being a temporary substitute to be dropped with no warning. In one section, as María imagines Javier’s feelings for her, the writing struck me as painfully, distressingly relevant. Consider how the uninterested partner in a love affair has all the power:

Once it becomes clear that things cannot simply drift on, that they are not going to dissolve of their own accord or quietly die or come to a peaceful conclusion, then, generally speaking, it becomes very difficult, almost impossible, to wait; one feels a need to say the words, to come out with them immediately, to tell the other person and then vanish, so that she knows where she stands and won’t continue living in a fool’s paradise, so that she won’t still think that she matters to us when she doesn’t, that she occupies a place in our thoughts and our heart when she has, in fact, been replaced; so that we can erase her from our existence without delay.

Ouch. But don’t worry: I’m not here to wallow. It just cut a little too close to the bone, that’s all, and it’s far from the only section, as María catalogues her unrequited feelings for, and efforts to get over, Javier in immense detail. One has to have a certain sense of the ironic to cope with things like that at moments like this. Fortunately my sense of the ironic has merely been bruised rather than killed off. And María, after all, is not the only one with infatuations – be that for fantasy couples or emotionally-unavailable people. Javier has his own crippling infatuation, which drives him to contemplate the uncontemplatable. And perhaps Luisa, too, struggling with the loss of her perfect husband, finds her recovery hindered by her infatuation, her more-than-love, for him. Essentially, therefore, this is a book about how a lot of people have been made extremely unhappy by their strong feelings and how they struggle to get free of them.

Was I convinced? Not always. Javier’s monologues felt implausible for real life, as did María’s rapt attention (there’s a point, surely, where a man has to be told that his self-absorption borders on onanism?). Nor did María feel like a really plausible woman in her reactions to Javier: she was more, perhaps, the embodiment of what a man would like a woman to be like in those circumstances. It is curious too, isn’t it, that Marías gives his own name to the distinctly unsympathetic male protagonist and a version of his surname to the miserable, self-effacing narrator? For María is self-effacing, despite telling the story in first person. She observes; she offers her body as a vessel for the relief of a man who cares nothing for her; she expects to be forgotten; she is always on the verge of tiptoeing quietly and discreetly away. I wanted to shake her: “Good God, woman, be a force in your own life!” She is merely a vessel for the story, without truly shaping it at all.

A frustrating novel, therefore, with a bleak picture of how much a woman will suffer from the man she loves, and how desire, or infatuation, can brutalise our sense of right and wrong. It’s very much an arthouse book, one that spends its time among thoughts rather than actions. And one that isn’t interested in boring bourgeois morality but in pressing the limits of the term, to see whether extremes of emotion make it more elastic. It’s an unflattering picture of human nature but scattered with moments of sharply relatable observation. A curious thing. I certainly want to read more Marías, and I will, because I have a book of his essays waiting to be reviewed for Netgalley; but perhaps next time I’ll go in poised for the intellectual challenge rather than hoping for a story.