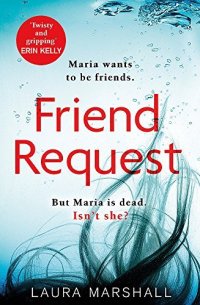 Occasionally we all get moments, perhaps after reading a surfeit of very serious Russian short stories, when we’d quite like to read something a little less demanding. So it was that this much-publicised thriller arrived on my Kindle. I’d spotted posters for Friend Request all over the Tube a few months ago and the premise intrigued me. What would you do if you had a Facebook friend request one morning from an old classmate whom you believed to have died twenty-five years before? (Personally I wouldn’t accept it and would report it to Facebook; but I suppose that’s why I’m not the protagonist of a thriller.) It was a tantalising, eerie scenario. I plunged into the story with gusto, reading it in an afternoon, but, maybe inevitably, it didn’t quite live up to expectations. A taut tale of rising tension is muddied towards the end by too many plot strands and a much-hyped twist that felt more melodramatic than plausible.

Louise Williams would be the first to admit that her schooldays weren’t exactly the best days of her life, but she’s moved on. A recently-divorced single mum, she’s determined to make her life work, focusing all her energies on her freelance interior-design business and on her four-year-old son Henry. But it’s hard. When she looks at the lives of her friends and peers on social media, they all seem to be coping so much better than her, with their unbroken marriages, perfect children and trophy holidays. And then, one day, social media delivers an even greater blow. Louise receives a Facebook friend request from Maria Weston; but Louise knows perfectly well that Maria is dead; that she died on the night of the school-leavers’ party when they were sixteen. Didn’t she? Yet here she is, asking to be Louise’s friend. Terrified, Louise accepts the invitation… and then the messages start. It looks as though someone knows perfectly well what Louise did on the night of the leavers’ party, twenty-five years before, and is determined to make her pay.

Marshall’s book skips back and forth between the present day, in which Louise grows increasingly alarmed by the messages she receives on Facebook from Maria, and their schooldays in 1989. We see Louise, acutely sensitive to hierarchy and desperate to be accepted, clinging to Sophie Hannigan (her ‘best friend’) and the cool girls, Claire and Joanne, always worried that the slightest misstep could cast her out forever. When new girl Maria Weston starts, Louise is instinctively welcoming and wonders whether Maria could be a new, real friend for her. Then, rumours start to filter through from Maria’s previous school which make it very clear that she’s not going to be acceptable to the taste-setters of Sharne Bay High. Louise realises that to be seen with Maria is social suicide and, driven by her need for acceptance, closes ranks against the newcomer. Back in the present day, she’s disturbed by news that her school is to hold a reunion for the class of 1989. On one hand, it means facing her ex-husband Sam, who was in her year at school, and once again feeling judged by all the people she’s tried so hard to put behind her. On the other, it seems that Maria Weston is all too keen for her to go… but why?

This book is so painfully familiar in some respects. It probably won’t come as a shock that I wasn’t exactly one of the popular girls at school. I was, in fact, about as far from popular as it’s possible to be (except when people wanted to copy my homework). I was neither pretty, nor sporty, nor loud: I had frizzy hair, extreme freckles and was excruciatingly keen (even our deputy headmaster called me ‘Hermione’ to my face). So I know only too well what it’s like to suffer the kind of sustained psychological warfare that goes on among teenage girls. And no, you don’t get over it: it scars you for life, whether you allow it to show or not. Marshall is excruciatingly good at conjuring up those subtle indications of acceptance or rejection: where you sit at lunchtime; the sniggering and whispered comments; the knowledge that you’re being left out. Her evocation of the school climate is pitch-perfect, to the extent that all your teenage anxieties come flooding back again.

Where the book stumbles is in trying to make its twists bigger and better and more dramatic than they have to be. A thriller isn’t a thriller nowadays unless the publisher can paste across the front, in massive letters, ‘The most shocking twist you’ll read this year!’ And so forth. Everything started to crumble for me in the third act when, having built up a nuanced picture of a miserable schoolgirl and overwrought woman, Marshall starts revealing what’s actually happening. Obviously I’m not going to give any spoilers here. Certain things seemed to come rather out of left field, while other things became much too complicated – and, by the end, it feels that Marshall was going for shocks rather than consistent characterisation or even plausibility. It’s a shame, because until that point it felt more or less on a par with something like Gone Girl or The Girl on the Train, but I just didn’t quite think it carried through in the end.

Having said all of this, I needed something to clear my mind – a palate cleanser – and this certainly offered that. For your summer beaches or long journeys, when you want something easily readable and gripping, this is a perfectly solid thing to choose – although you might find yourself checking your social media privacy settings afterwards.