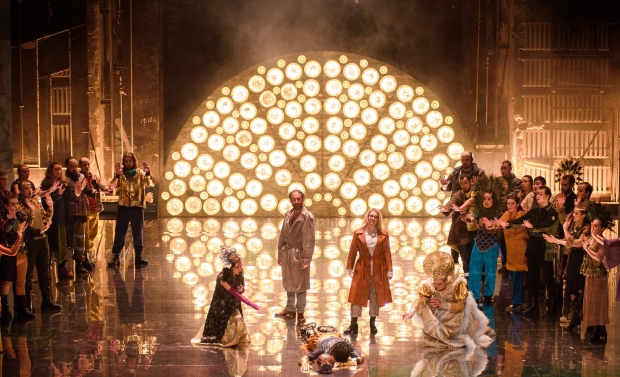 When business took me to Versailles this week, I just happened to arrive on the first night of the Opéra Royal’s new production of Lully’s Phaéton. As you know, French Baroque opera is still something of a terra incognita for me, so I decided to see if there were tickets available, and discovered a last-minute return. It would’ve been rude not to. That evening, perched in a velvet-lined box, with gold and glittering crystal overhead, I settled in for an epic four-hour tale of ambition, love and hubris. It was a steep learning curve, with marked differences from the Italian operas that I know and love, but I can’t think of a better place to experience the Sun King’s composer for the first time, and the production was blessed with a terrific performance in the title role by Mathias Vidal. So join me, as I bumble my way through this first extended encounter with Monsieur Lully…

Prologues are hugely important to French operas and, in this period, were often thinly-disguised hagiographies of Louis XIV. And Phaéton is no different. As the curtain rises, we encounter Astrée, goddess of justice (Elizaveta Sveshnikova), who has been exiled from earth to a celestial garden where she and her ladies enjoy the innocent pleasures of the simple life. But Saturn (Lisandro Abadie) arrives in search of her, bringing wonderful news: it’s time for her to return to Earth, because a hero is coming who will bring together the warring peoples of the globe in peace and harmony. (I always find it deeply ironic that Louis is hailed as a peacemaker when in fact he spent much of his reign waging war across Europe.) We are then whisked down to Egypt, where Lybie (Eva Zaïcik), daughter of the king Mérops, wanders alone in the palace gardens. Her father is about to name her husband, who will also become his successor, and Lybie is anxious that he will choose someone other than her beloved Epaphus (Lisandro Abadie again). Deep in thought, she is joined by her friend Théone (Victoire Bunel), who is also mourning her fate. She is in love too, but with Phaéton (Mathias Vidal), who has suddenly become inexplicably cold and uninterested in her. The two girls console one another; but then Phaéton turns up and Lybie discreetly leaves.

Théone’s fears are justified. Phaéton has no thoughts of love left in his head. His one concern is to find his mother Climène (Léa Trommenschlager), so that she can reassure him. He knows that Mérops (Aleksandr Egorov) is about to announce Lybie’s husband and, while he doesn’t love Lybie in the least, Phaéton knows that Lybie’s husband will automatically become king. Surely Mérops remembers that Phaéton is his true heir? (Climène is married to Mérops, so Phaéton and Lybie are step-siblings, though Phaéton has no real claim to the throne in his own right.) Surely Mérops won’t choose that graceless Epaphus as king? Phaéton can’t bear the thought of being lorded over by that oaf. Climène is also alarmed and, just to make sure, calls on the shepherd Proteus (Viktor Shapovalov), who can see into the future. When constrained to do so, Proteus warns her that Phaéton has a grim future ahead of him. He will gain glory, certainly, but it will lead to his early death. Now Climène is worried for her son, but Phaéton is delighted. He will have glory! What does it matter if he dies young, as long as his name will live for ever?

The queen and her son have their way and Phaéton is named Lybie’s husband, which makes virtually everyone (except Phaéton) very unhappy. Epaphus is particularly narked, because after all he’s the son of Jupiter and Isis and (in his opinion) ranks far higher than an upstart whose only claim to be the son of Apollo is because his mother says so. Of course she would, wouldn’t she? But where’s Phaéton’s proof? And so it’s from the rivalry between these two young men that Phaéton’s fatal ambition arises. He begs the gods to intercede for him: he begs that Apollo will hear his prayer and acknowledge him as his own. A miracle occurs! Phaéton is raised up to the Palace of the Sun, where his glittering father (Cyril Auvity) greets him fondly. Apollo is shocked to hear that Phaéton’s paternity is doubted. He will do anything, anything, to prove it. (Why do people in stories and operas never realise that it’s a bad idea to promise anything?) And so Phaéton asks to drive his father’s sun-chariot across the sky. Apollo is horrified – a mortal can’t possibly handle his fiery horses – but it’s too late. He’s promised. And so Phaéton’s fate is sealed. 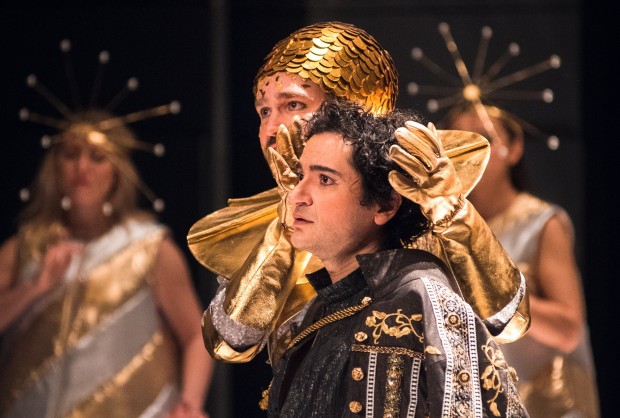 Musically, I’ll be frank, I’m still getting used to French Baroque. One day I will understand it and be able to appreciate it properly, but at the moment I confess that it all still feels like very hard work – which is precisely why it’s good to make an effort to go and see things like this. There were some wonderful choruses, each act concluding with a rousing crowd scene, and Lully’s instrumental music (for ballets, I presume) is charming; but I’m still struggling to get my head round the style of the recitatives and the arias. This is entirely my fault, of course. It’s like trying to understand another language when you haven’t really studied it; and, besides, I keep forgetting exactly how early Lully was. It’s anachronistic to expect him to sound like Handel or Vivaldi or Porpora, when they started writing music at least twenty or thirty years later. A more accurate parallel would be Cavalli, with whom Lully actually collaborated on the opera Xerse in 1660, writing ballet music to be interspersed with Cavalli’s scenes. And, if there is any Italian parallel to Phaéton, I suppose Cavalli comes closest with his plot-driven recitative and brief arias (brief by the standards of opera seria, that is). It’s also notable that Lully chooses the five-act structure for his tragedy, rather than the three acts favoured in Italian operas: a choice originally advocated by Horace, I believe, and also adopted by French poetic tragedians of Lully’s time like Racine and Corneille.

The problem for me about this particular opera is that Phaéton is just a bit of a brat. And he isn’t even an amusingly overblown brat, like Handel’s Xerxes: he’s just deeply unpleasant, and I found it impossible to warm to him. He’s only interested in himself and treats Théone abominably when he casually throws her over in favour of pursuing his own glory. When he deprives Epaphus of both his beloved Lybie and the crown, he crows about it to his rival’s face. He’s a spoiled, grasping, immature little boy and, like Semele, he finds that elevation to the divine sphere just isn’t enough for him. He has to keep pushing, to attempt to take on the gods’ powers in his own fragile human form and, also like Semele, his arrogance leads to tragedy. Mathias Vidal couldn’t do much to make his character sympathetic, but he did sing with striking power, expression and passion.

One interesting question is how the opera’s iconography would have been viewed at the time. It’s tempting to read parallels with Louis XIV’s self-identification as the Sun King, but it’s problematic to see Louis as either Phaéton or as Apollo (here referred to as merely the Sun). Phaéton may be the hero alluded to in the prologue, and the bringer of a new sun to humankind, but his ambition turns out to be fatally dangerous and he is cast down by the gods. Apollo may be closer to the mark, but surely Louis wouldn’t have wanted to be associated with a character who watches while his son is destroyed before his eyes? The programme essay suggested that, in fact, we should here see Jupiter as Louis’s alter ego, dealing out punishment to impostors who have ideas above their station. But I’d like to learn more about how Louis and his courtiers ‘read’ the operas they were shown, and to what extent we should try to see them as allegories.

Designed by Benjamin Lazar, with costumes by Alain Blanchot, the opera was a bit of a visual mish-mash, with gods and nymphs in modern dress, ‘mortals’ in jumbled costumes that looked like they’d been put together from an exuberant dressing-up box, and a few moments of dazzling, full-on Baroque splendour, such as the scenes in Apollo’s realm. The singers performed in quite a stilted way, complete with Baroque hand-gestures and poses (no one ever seemed to look anyone else in the eye, even when they were meant to be talking to one another), but this grew on me. At least there weren’t any terribly off-putting directorial flourishes. Quite frankly, after flying skeletal fish, parrots and sharks, it’s a joy to see something with a bit of restraint.

Lazar and his colleagues came up with some striking solutions to complex problems: for the scene of Proteus’s transformations, they projected a quickfire sequences of images onto the wall behind him, while he struggled in the grip of his captors; and for the Chariot of the the Sun, they conceived a stunning half-circle of lights, reflected in the mirrored floor to create an entire disc. It was the most beautiful part of the set and I wished it had had slightly more stage time. Personally, I wasn’t entirely convinced by the ‘newsreel’ images played to indicate the pageantry of Mérops’s court, though I was amused by the choice of clips, which ranged from the coronation of Queen Elizabeth II to North Korean military parades to Macron’s recent review of troops with Trump. If nothing else, it added a bit of levity.

So, my verdict on my first Lully? Elegant choruses, beautiful ballet music and arias that I’ll need a bit more knowledge to fully appreciate, presented in a way that blended fashionable modernity with a few nods to Versailles’s elaborate past. The music was beautifully performed by Le Poème Harmonique under the baton of Vincent Dumestre. French Baroque operas certainly feel more intellectual than their Italian peers, although once again I mustn’t forget how early Lully is (having said that, he’s a world away from Cavalli’s often crude comedy). And one final technical question: am I correct in detecting an odd style of pronunciation? The singers, even the native French speakers, seemed to emphasise the final consonants of words in a way that one doesn’t in modern spoken French. Does that indicate a change in the way French has been pronounced over the centuries, or is it simply a way to make the text easier to distinguish?

I’d be very keen to see more and, since we’re unlikely to get a staged Lully or Rameau here in London very soon, I’ll probably see if I can get hold of some of the productions that have been released on DVD or Blu-ray. So, any recommendations welcome! I’d prefer more traditional productions, as I know there are some seriously wacky ones out there, and I’d rather leave those until I have half a clue what’s going on.

Find out more about the Opéra Royal de Versailles 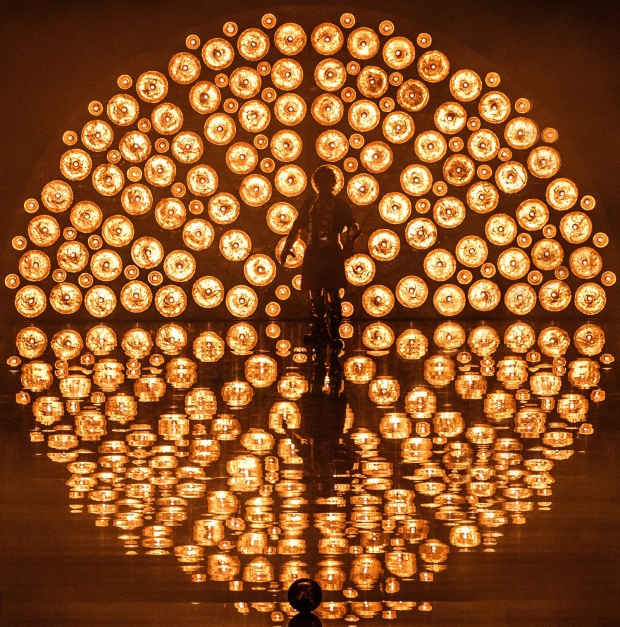