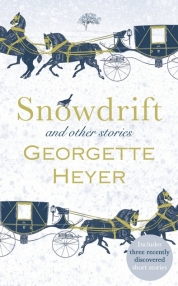 This post will be shorter than usual, because this book of short stories by the doyenne of Regency fiction is actually a reissue of Pistols for Two, which I wrote about some months ago. (I strongly advise that you read that post too, as only then will you get a full picture of my thoughts.) As I discussed the vast majority of the stories then, I’ll focus here on the three previously unpublished stories added to Snowdrift for its new release. These are all variations on a theme, namely encounters on the road; and, while they aren’t Heyer at her best, they do have a certain historical charm.

The first of the three stories is Pursuit, in which we encounter the grim Lord Shane, who finds himself obliged to chase after his absconding ward Lucilla and her would-be husband. To make matters worse, he’s accompanied by his ward’s neglectful governess, Miss Fairfax, who shows a distressing lack of contrition and dares to suggest that the whole affair is his fault for having forbidden the match. Unfortunately, it turns out that even their flight can be misconstrued, leading to a situation of the utmost delicacy. In the next story, Runaway Match, we see the other side of the experience, this time joining a young couple on the run (elopers? elopees?). Mr Rupert Morley and Miss Paradise have known each other since they were children and have always supposed they were to be married. When Miss Paradise’s family attempt to make a match for her with the undoubtedly dismal Sir Roland Sale, she and Rupert decide to run away together to Gretna. All is going well so far but, when they encounter a stranger at a posting inn on the road, they fear that Sir Roland may have caught up with them in pursuit of his prize.

The final story is Incident on the Bath Road, in which the elegant Lord Reveley finds himself in the unexpected position of Good Samaritan. An enigmatic young fellow, who gives his name as Mr Brown, has suffered an accident and begs Reveley to help him get to Bath as soon as possible, in order to help defend the honour of a young lady. The story is mildly unconvincing and soon becomes more so, as Reveley finds himself caught up in the most extraordinary state of affairs – which leave him far more involved in the mysterious Mr Brown’s fate than he ever expected to be.

As these three stories are new discoveries, they’re parcelled together at the end of the content originally published as Pistols for Two. This is slightly unfortunate, as they’re all very similar in concept and tend to blur one into the other. They are also not among Heyer’s strongest stories, featuring archetypes rather than fully rounded characters and three very implausible and rather sudden declarations of true love. I have to crown Miss Paradise as Queen of the Anodynes, for her personality seemed to extend no further than being an immature flirt, which made the conclusion of the story even more unlikely to me… but I daresay I’m being uncharitable. Sadly these stories add little to the original collection, but the good thing about buying Snowdrift is that you also get all the amusing tales in Pistols for Two. Ultimately, though, I have to admit that Heyer’s forte is as a full-length novelist. Let’s be honest: in the more condensed short-story form, we see just how implausible and sudden her romances are and how ubiquitous her ‘types’ are.

I should stress that my rating for this post covers the entire contents of the book, not just the three new stories.

3 thoughts on “Snowdrift and Other Stories (2016): Georgette Heyer”