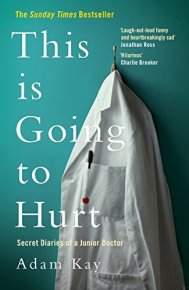 Secret Diaries of a Junior Doctor

In August 2004, bright-eyed and full of enthusiasm, Adam Kay sets off for his first day as a hospital doctor. Six years later, exhausted and traumatised, he leaves the profession. In-between, as an obstetrician and gynaecologist, he delivers over a thousand babies, saves lives, gets soaked in other people’s blood, and removes odd objects from a variety of orifices. This collection of diary entries take us through his career and, as you might imagine, they’re not for the squeamish. They made me wince, and very often I laughed out loud; but they also made me sad. Kay gives a sobering picture of the British National Health Service at a time when its funding is being stealthily shaved away by the government, and the Health Secretary seems to have precious little idea of what doctors are actually doing. These diaries show us what it’s like on ground zero, and it’s not a pretty sight. With humour, sarcasm and compassion, Kay demonstrates how desperately stretched our doctors are. Vital reading, and painfully timely.

It’s an irony that doctors offer one of the most vital services and yet operate in some of the hardest conditions. Kay points out that would-be medics have to choose their career at the age of sixteen, when picking their A level subjects, ‘two years before they’re legally allowed to text a photo of their own genitals.’ And, he implies, considerably before they understand what kind of lifestyle they’re getting themselves into. As we follow him through his diaries, we encounter the horror of night shifts, when one doctor is on duty and is responsible for every patient in the entire hospital: ‘I spend the entire night feeling like water is gushing into the hull of my boat and the only thing on hand to bail it out with is a Sylvanian Family rabbit’s contact lens.’ The amazing thing is that he actually manages to make it through, albeit often without any food, drink or rest between emergencies. And the startling thing is that this even applies on Saturdays, when you’d think that hospitals (including A&E) would be at their busiest. Kay notes that, on Saturday nights:

the NHS runs a skeleton service. Actually, that’s unfair on skeletons – it’s more like when they dig up remains of Neolithic Man and reconstruct what he might have looked like from a piece of clavicle and a thumb joint.

By now you should have got an idea of Kay’s style: dry, ironic and all too ready to see the ridiculous in things. As a young doctor, moving regularly between different hospitals, he finds himself starting in a new post on Black Wednesday: so-called because it’s the day that all the trainee doctors have to swap to a different role: ‘It is an established fact that death rates go up on Black Wednesday. Knowing this really takes the pressure off, so I’m not trying very hard.’ This should, of course, be taken absolutely tongue-in-cheek. One thing that comes through very powerfully is how much Kay cares about his patients. He’s working unbelievably long hours; his relationship is disintegrating in front of his eyes; he has to miss friends’ weddings, family christenings and Christmas; and yet he carries on because he cares about helping people. Though never in a virtue-signalling way.

This is what makes it even more depressing for Kay when he is sued, rather unfairly, by a patient. On top of the usual strain of being responsible for life-or-death decisions, he now has added stress and guilt; he has to spend long hours of free time that he doesn’t have, preparing for a tribunal; and his self-confidence is shot to pieces. When you read what he has to put up with – the virtually non-existent IT; the overworked colleagues; the lack of sleep – it’s a wonder that doctors make mistakes so rarely. Given their working conditions, which would spark an outcry in any other profession, it’s astonishing that they can continue to operate as efficiently and precisely as they do. And so Kay stresses, in his afterword, that we should try to cut doctors a bit of slack. They’re often in the front line of fire with aggrieved patients, who probably don’t realise that they’re at the tail end of a thirteen hour shift, haven’t eaten, and are late for the appointment because they’ve just been saving someone’s life.

There are a lot of very funny stories, along with some truly ghastly ones (male readers are advised to steer clear of the description of a degloved penis, which made me feel very queasy and will probably leave you crumpled on the floor with your eyes watering). The operating theatre throws up some gems: the elderly woman who’s discovered to have a spoon in her abdomen, fifty years after having a caesarean. The hungover student medic who faints as the doctor is sewing up a woman’s uterus, ‘facing-planting right into the open abdomen‘. The surgeon who decides to do a caesarean when the baby can’t be persuaded out with forceps, only to find on opening up the patient that he’s just missed the baby, who has slipped out the birth canal in the meantime. And you get a firm sense of Kay’s own character: his lack of patience with herbal medicine, orthapaedic surgeons (an aversion never fully explained), and the kind of woman who turns up with a ‘nine-page birth plan, in full colour and laminated‘, and a CD of whale music. You can sense Kay’s quiet satisfaction when he reports that said patient is soon demanding an epidural and is swearing at her husband as he tries to sort out the whale music.

The humour is necessary, because the bare facts are shocking. Doctors sacrifice their entire lives to their work and you feel for Kay as his relationships with his friends and, most tragically, with his partner H begin to crumble. Yet he can’t stop. If it’s a choice between being on time for date night, or stopping the litres of blood that are flooding out of a woman’s uterus, there really isn’t much choice. And that’s the sad thing. That there has to be a choice. That we don’t have enough doctors to help spread the burden. That the government doesn’t focus on making our hospitals safer for staff and patients, rather than ‘cost-saving’. That we don’t have a culture that prioritises NHS care (perhaps because many politicians undoubtedly have private healthcare – which, ironically, Kay notes, usually means you’ll be seen by a much less experienced doctor). That we’re letting this crisis spiral out of hand, because doctors are frenziedly just getting on with it rather than shouting about it – they don’t have time, because they’re up to their elbows in internal organs trying to save four people at a time from dying.

This absolutely has to be read. It’s important for us to understand what it’s like to work on the NHS and I learned an awful lot from it. In fact, I’m ashamed to say I had no idea how everything worked in hospitals, having been a very infrequent patient. The book has received a lot of attention and absolutely deserves it, and more; but there’s nothing remotely ‘worthy’ about it. Kay’s sense of duty sits alongside a wicked sense of humour (perhaps fittingly, he’s now a comedian). His diaries are peppered with anecdotes that I’ve been reading out loud to anyone who’ll sit still long enough to listen. I’m going to conclude with one of my favourites: Kay’s examination of an elderly lady in his gynaecology clinic: