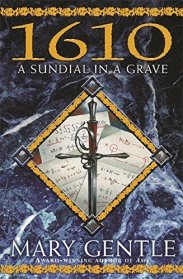 I have a mixed relationship with the author Mary Gentle, having now read two of her books: Ilario, long before I started this blog, and Black Opera some years ago. 1610 has been sitting on my shelf for over a year and, in the course of a warm, sunny weekend, I decided to give it a go. A sexual assault in the first few chapters gave me pause, but I pressed on regardless and soon found myself in the midst of a very enjoyable swashbuckler, populated with spies, rogues, kings, mathematicians and cross-dressing swordsmen – and taking in the France of Marie de’ Medici, the England of James I and, unexpectedly, Japan in the years before the Sukoku Edict closed its borders. I should stress that this isn’t a fantasy, but a rollicking historical adventure with a few hints of the mystical: best described, perhaps, as The Three Musketeers with added esoterica.

Valentin Rochefort is that most inconvenient of creatures: a sword-for-hire with a soul. Disowned by his noble family, his chequered youth has given way to a career as a soldier and, lately, spy and assassin in the service of the Duc de Sully, bosom friend of King Henri IV of France. Unfortunately, this makes Rochefort noticeable. Even more unfortunately, Henri’s ambitious wife Marie de’ Medici resents Sully and dreams of getting rid of her husband, to put her infant son Louis on the throne and rule as his regent. Soon, Rochefort finds himself deep in the throes of a court conspiracy – one which rapidly, before his disbelieving eyes, turns into a murder plot – and then, to his even greater disbelief, to successful regicide. Fleeing the country, he has just enough time to pick up two very unwelcome companions: the arrogant young duellist Dariole, who has a lamentable effect on Rochefort’s temper and an even worse effect on other parts of his anatomy; and a shipwrecked samurai, the only survivor of a diplomatic mission to King James of England. Rochefort is a man who values discretion and the chance to move unremarked. In company with a prickly Japanese swordsman and a hot-headed adolescent with alley-cat manners, he hasn’t a hope of either.

As our three heroes arrive in London, a new player makes himself known on the scene: the English physician and mathematician Robert Fludd. A student of Giordano Bruno, Fludd has used advanced mathematics to calculate which paths must be followed in order to bring about certain futures. Unluckily for Rochefort, Fludd has lighted on him as the perfect catalyst to achieve Fludd’s ideal future. Even worse, Fludd has found the critical event that will shift world history into its new groove: James I must die, and his son Henry Stuart must ascend the throne. Rochefort already has one king’s death on his conscience and isn’t overly keen to add another, but Fludd has certain methods of persuasion. To make matters worse, Rochefort isn’t a sole agent any more. He has responsibilities: for the would-be Japanese ambassador to the English court; and for Dariole who, it turns out, has unforeseen qualities that complicate Rochefort’s feelings. Struggling to deal with infatuation on the one hand, yet another murderous court plot on the other, and the constant fear that Marie de’ Medici’s men will track him down to ensure his permanent silence, Rochefort is far from happy about the present situation. Annoyingly, he can’t do a thing about it.

Rochefort grew on me throughout, perhaps because I detected flashes of Robin Hobb’s Fitz in his short-tempered, world-weary, yet strangely idealistic character. There are many unpleasant things about him, but he’s still a gentleman at heart and he’s constantly torn between his self-imposed obligation to protect Dariole and his deep loyalty to Sully. Plus he has a black humour, perhaps appropriate for an excellent swordsman who has a certain penchant for being beaten – as long as it’s by the right person. His two companions are equally well-rounded: Dariole a remarkable mix of attitude and vulnerability; and the samurai Saburo offers a fascinating mirror in which to reflect the norms of Western honour. The rest of the cast is huge, properly epic, taking in a veritable who’s who of early 17th-century Europe, including Robert Cecil, Amelia Lanier, Arbella Stuart and, at the very end, a cameo from none other than the young Richelieu. I didn’t twig until I’d finished the book that Rochefort becomes, ‘later on’, in the world of The Three Musketeers, the cardinal’s dark shadow and d’Artagnan’s nemesis. It’s all rather satisfying and Gentle presents the book – as she does Ash, which I’ve flicked through – as a compilation of found historical documents, focused on Rochefort’s Memoirs.

Just in case you haven’t yet twigged, there’s a hell of a lot going on here. Gentle is hugely ambitious and the remarkable thing is that she pretty much pulls it off. It’s a very clever book – albeit occasionally slightly too involved for its own good – and I enjoyed it considerably more than I did either Ilario or Black Opera. Part of that was because Gentle does a very good job of channelling Dumas, throwing in all manner of plots, traps, kidnappings and double-bluffs, while giving her story a modern awareness of gender identity, feminism and sexual desire. (I loved the scene in which Rochefort, having been forced to step in as the Muse Clio in a court masque, self-consciously faces up to Dariole while dressed in a farthingale.) I also loved the unexpected starring role of Wookey Hole Caves, near where I grew up in Somerset. But a large part of the appeal came from Rochefort’s narratorial voice, giving the story heart, charisma and long-suffering common sense. Having enjoyed this, I now feel renewed motivation about tackling Ash, where I know I can look forward to another swashbuckling heroine.

What do you all make of Gentle? Do others share my mixed feelings about her books? Do you also feel daunted by the sheer scale of her novels? (My edition of 1610 is roughly the size and weight of a large toaster.) And does anyone else feel slightly unsettled by her use of sexual assault as a plot device? How do you think 1610 compares against her alternate-history novels, and which of her other books do you think I should try?