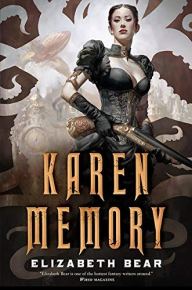 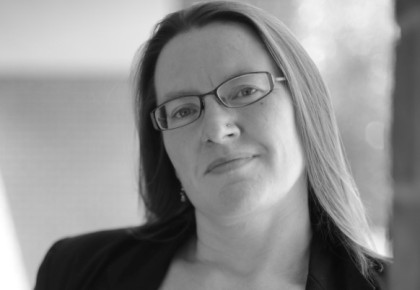 Elizabeth Bear has been on my radar since Heloise introduced me to the startling Iskryne books that she co-authored with Sarah Monette, although her solo work has (so far) been of a less blush-inducing stamp. I have all three of her Eternal Sky books, which I’m hoarding for a moment when I fancy a good solid dose of Genghis-Khan-inspired fantasy (which, to be fair, is always). However, I’ve kicked things off with this standalone novel, best described as Western steampunk noir. This delicious adventure takes all the elements of a good cowboy yarn – the tall, dark stranger from out of town; the slimy businessman who fancies himself as mayor; the plucky girls from the local brothel; and reimagines them in a feisty, female-driven romp with a brilliantly diverse cast.

You ain’t gonna like what I have to tell you, but I’m gonna tell you anyway. See, my name is Karen Memery, like “memory” only spelt with an e, and I’m one of the girls what works in the Hôtel Mon Cherie on Amity Street … I guess that makes me a seamstress, just like Beatrice and Miss Francina and Pollywog and Effie and all the other girls. I pay my sewing machine tax to the city, which is fifty dollar a week, and they don’t care if your sewing machine’s got a foot treadle, if you take my meaning.

From the opening lines, Karen’s voice is as individual and consistent as they come, her jauntiness ringing off the ear. Bear never lets her slip out of character once and there are some wonderful phrases: ‘Miss Francina went striding out into that burning cold in her negligee and marabou slippers like she owned the night and the rest of us were just paying rent on it‘, for example, or the occasional use of the fantastic word ‘cattywumpus‘, which it is now my mission to sneak into a conversation somehow.

This hard-boiled young woman is making a living for herself in the upper echelons of the flesh trade in Rapid City (based on Seattle Underground). She’s in the comfortable position of being in a house, not on the street: one of a colourful cast of young woman under the leadership of the redoubtable Madame Damnable. But their cosy domestic arrangement is altered for good one night, when two young women turn up, exhausted and wounded, at Madame’s front door. One of them is Merry Lee, who famously risks her life to liberate women who’ve been condemned to the lowest rung of prostitution in the ‘cribs’ by the docks. The other is an Indian girl named Priya, newly freed from the clutches of Madame’s nemesis and business rival Peter Bantle. But Bantle is not the kind of man to let his ‘property’ abscond without a fight.

Before the girls of the Hôtel Mon Cherie know what’s hit them, they’ve become targets of Bantle’s motley crew of henchmen. And then, to make matters worse, other girls start dying across town, turning up flogged to death outside various brothels. Someone is trying to give Madame and her girls a warning about interfering with Bantle’s business; but who? The mystery becomes more acute when a mysterious lawman arrives in town on the tail of the killer: the dashing Marshal Bass Reeves, accompanied by his Comanche posseman Tomoatooah. Marshal Reeves is determined to catch his man; and Karen, for her part, is resolved to help him. Nobody threatens Madame and her girls and gets away with it. And, more to the point, nobody threatens Priya, for whom Karen swiftly begins to feel a distinct partiality. But their mission to disarm Bantle (quite literally) will face all manner of challenges: nighttime raids; fire; rooftop chases; steampunk submergibles; zeppelins; and a formidable machine that allows Bantle to control people’s minds. Rapid City was never so dangerous – nor so thrilling.

I haven’t read much steampunk before – The Glass Books of the Dream Eaters comes to mind, and The Goblin Emperor – but it definitely isn’t a genre I’m familiar with. I loved the way that Bear combined the down-at-heel thrust of a city on the make – Rapid is the last stop on the journey to the northern gold-fields – with the fantastical technology of a Victorian otherworld. There are cogs and gears aplenty, not least in the Hôtel Mon Cherie’s multi-talented Singer sewing machine. This isn’t the small black machine you’ll see piled up in the windows of All Saints stores nowadays, but a much more expensive whole-body version which Karen ends up using for somewhat unconventional purposes. This gadget made me long for illustrations. I couldn’t quite imagine it in my head and ended up envisaging it as a kind of Iron Man suit, which surely can’t be right, but certainly made for some fun visual images.

As I mentioned earlier, this also has to be one of the most gloriously diverse books I’ve read in ages. Among the protagonists we have characters of Irish (Karen), Chinese (Merry Lee), Indian (Priya), Native American (Tomoatooah), Creole (Beatrice) and African-American (Marshal Reeves) heritage; not to mention sexual and gender preferences right along the spectrum. While Bear hints at the racial tensions in her alternate-universe Wild West, her own characters simply plunge with panache into their adventures: what joins them together is far more significant than what separates them. Speculative fiction seems to be leading the pack in such matters nowadays, and I hope to come across many more books featuring such a wonderful cast – not to mention so many strong women holding their own with such panache. And you know the best thing? Marshal Reeves (and his fine moustaches) actually existed and has had a rich afterlife in popular culture, not least as the purported inspiration for the Lone Ranger; Madame Damnable is also based on the real-life Seattle brothel-owner Mary Ann Conklin.

This was a real joy to read, and I know that Karen makes a return in Bear’s recent novella Stone Mad, so I’ll have to seek that out before too long, to see what’s next in line for our courageous heroine and her friends in Rapid City. But in the meantime I thoroughly recommend this to any with a taste for alternate universes, steam and gears, or simply a good old fashioned story of good (at heart) up against evil genius.