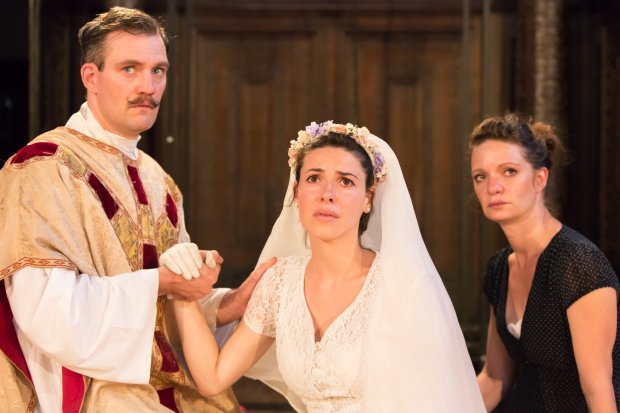 There will be a number of theatrical posts over the next few days, for two reasons: first, I have seen an awful lot of plays recently and, secondly, I still have to catch up with some plays I saw earlier in the summer. Fortunately, they’re all terribly good. This is one post, however, that’s pretty quick off the mark: it was only this week that I went to Gray’s Inn Hall to see the ever-brilliant Antic Disposition and their current production of Much Ado About Nothing. The company always performs their plays in France over the summer before coming to London and that’s had two important influences on their reading of Shakespeare’s delicious romantic comedy. They’ve adopted a mixed French and English cast for Much Ado, with some familiar faces from the blended cast of their magnificent Henry V; and Messina moves from Sicily to become a small French village, just after the end of the Second World War. The stage is set for love, longing and a merry entente cordiale, as romance blossoms over a lazy postwar summer.

I think I’ve written about more Much Ados than any other play by Shakespeare, so I don’t need to go into any depth about the plot. In short, the English forces of Don Pedro (Theo Landey) come to stay with the French Leonato (Chris Hespel) and his household in pleasant Messina. Leonato’s daughter Hero (Floriane Andersen) looks forward to being reacquainted with her crush Claudio (Alexander Varey), who has been eagerly anticipating their reunion, and who doesn’t waste any time in expressing his hopes that they can be married. However, not everyone has been looking forward to the visit. Leonato’s niece Beatrice (Chiraz Aich) grimly awaits the arrival of the wisecracking Benedick (Nicholas Osmond), the soldier whom she once loved and lost. Where there was formerly love, there’s now only the special kind of rancour that exists between people who can really hurt one another. 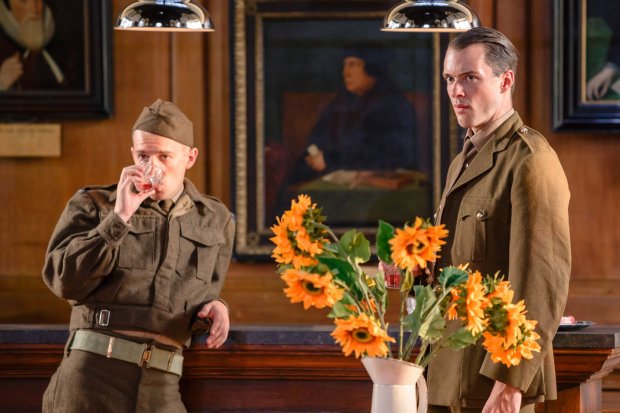 The ‘merry war‘ between these two adversaries is so well known that Don Pedro comes up with a smashing idea to pass the time: by the end of the troop’s stay, he will have managed to get Beatrice and Benedick to fall in love. The others enthusiastically promise their assistance; but, all this while, Don Pedro’s bastard brother John (Alfie Webster) lurks on the sidelines, looking for any opportunity to create mischief and misery with his henchman Borachio (Tommy Burgess). And he’s finally found his way in, thanks to the whirlwind romance between Claudio and Hero: so dizzying a passion that neither party has had time to come to know and trust the other. And it just so happens that Borachio has an understanding with Hero’s maid Margaret (Molly Miles).

This is probably my favourite Shakespeare play: I have an uncomfortable feeling that, if I were any Shakespearean character, I’d probably be a less witty version of Beatrice; and I love the astute crackling of defiance back and forth between two people who actually, deep down, are just trying to hide their pain and confusion. And I love the happy ending (that’s hardly a spoiler, is it?), and the gloriously quotable poetry. But there’s one thing I don’t like about the play and, if you’ve read my previous posts on Much Ado, you may know what it is. Dogberry. I’ve been bored by him; I’ve loathed him; I’ve been indifferent to him; once or twice, I’ve found him mildly amusing in small doses. 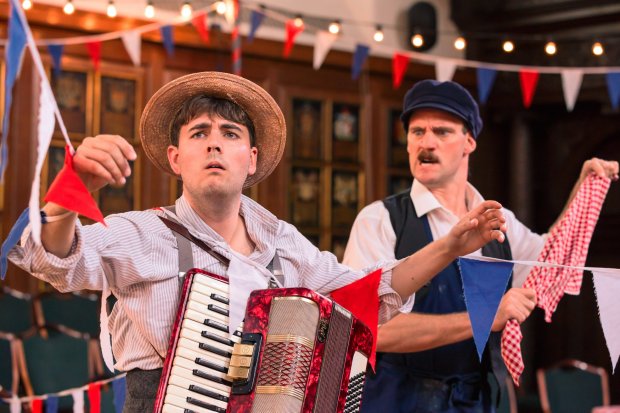 So you can imagine my amazement when Antic Disposition presented me with the first Dogberry I actually loved, in the form of Louis Bernard. Here Dogberry becomes the owner of the local cafe, a small-scale petty tyrant who also acts as self-important head of the watch. But the true genius of the production is in making him a cross between Jacques Tati and Basil Fawlty, and Bernard carried it off in a turn full of very French physical comedy, with Scott Brooks as his hapless, put-upon sidekick Verges (who has a remarkable talent for the accordion). The entire ‘rallying the watch’ scene, for example, was actually in French and was dominated by the clumsy shuffling around of Dogberry’s inept recruits. It was a stroke of brilliance.

Much Ado gives wonderfully meaty roles to its two main characters, but the secondary roles of Claudio and Hero are hard to flesh out properly, especially that of Hero. As I grow older, I’m increasingly irritated by her meek reaction to Claudio’s accusations at their wedding, and annoyed by her spineless willingness to take him back at the end. I want to shake her by the shoulders: ‘Hero, how could you? Think of what he said about you! Even if he was mistaken, do you really want a man who’d treat you like that?!’ But she never listens. All credit to Andersen, however, for giving Hero a little bit more grit than usual. When Claudio unveils her at their second, final wedding, she fixes him with a hard stare and, when she says, “I am a maid,” she sounds as if she’s warning him never to doubt her again. I liked seeing a bit more steel. Varey did the best he could with Claudio, but there’s only so much mileage to be got out of a character who is lovesick and spiteful by turn, and who receives an ending far better than he deserves. 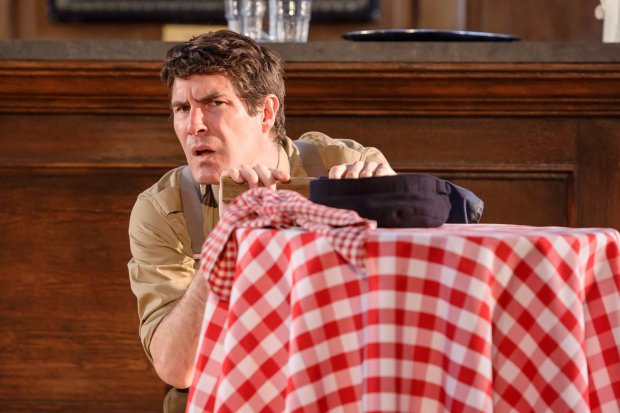 The play rests on Beatrice and Benedick. As the latter, Nicholas Osmond was a twinkling-eyed, self-confident joker: a man who showed no sign of his tragic romantic history, with just the right mixture of swagger and sensitivity. He had good chemistry with Chiraz Aich’s Beatrice, who came across as a woman more wounded than she liked to say: given to high spirits, but prone in a tight spot to become caustic. Aich’s lovely throaty voice worked very well for Beatrice, who I’ve always thought should be either a contralto or a low mezzo, although she did rather over-project at times. Not surprising, when you think the cast have come from cathedrals and French squares, but unnecessary in Gray’s Inn’s superbly wood-panelled Hall, where the acoustic reverberations occasionally blurred her words. She and Osmond were perfect in the final section when, in spite of themselves, they have to admit that the love they feel is real: Benedick’s quip, ‘Come, I shall have thee; though by this light, I take thee for pity‘ always makes me laugh, because despite sounding snide, it’s actually a wonderfully tongue-in-cheek declaration of love, and Osmond played it perfectly. They’d both sparred so convincingly that you felt genuinely happy that they’d finally managed to make peace.

I should have said much earlier that, on entering Gray’s Inn Hall, you found it transformed into a French square, with cafe tables set along the sides (where you sat if, like us, you’d been cunning enough to order reserved seated), and benches beyond. A bar stood at one end, which was fully operational beforehand and during the interval, but which also formed the centre of Dogberry’s little realm. And the space of the ‘square’ provided the setting for dances and intrigues and squabbles. It was a wonderful setting, and felt quite different from the arrangement of the space for The Comedy of Errors. Antic Disposition do find such extraordinary spaces for their performances. Every time I come to see them, I leave full of admiration for their creativity, their professionalism and their care with the text and the venue; and this time was no exception. Radiant and full of bonhomie, I passed out into the quiet squares of Gray’s Inn feeling at peace with the world and, indeed, thoroughly enchantée.

Find out more about Antic Disposition 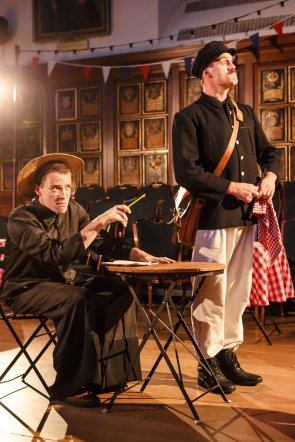 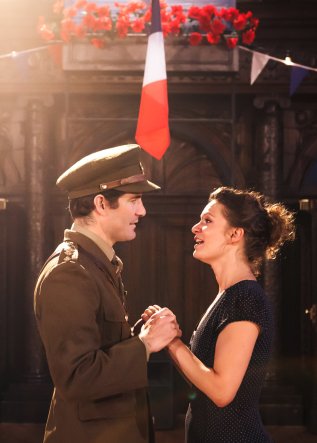