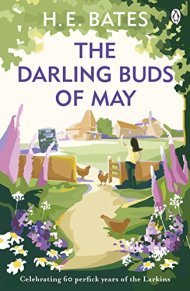 I have vague memories of watching the Darling Buds of May TV series in the early 1990s, although I was too young for much to register. The word ‘perfick’ made an impression, of course, and I remember that, every time Catherine Zeta-Jones came on screen as Mariette, my dad would shake his head and say, “I don’t know what they see in her”. I also grew to assume that my paternal grandmother, a farmer’s wife who died when I was small, must have been pretty much like Pam Ferris’s Ma Larkin. But plot? I honestly couldn’t remember much. As the first tenuous signs of spring try to force their way through the rain and sharp winds here in London, I decided I needed a bit of bucolic escapism and bought myself the book (and its sequels). And it was just the ticket. Warm, generous, sun-drenched: a world of strawberry-picking and white tablecloths in orchards on warm evenings; where all guests are welcome and, if you like it well enough, you don’t ever have to leave. Perfick indeed.

When the sprawling Larkin family return from a trip to fetch ice creams in their truck (said family being Ma, Pa and their six bonny, bouncing children), they find a stranger loitering in their farmyard. This is Cedric Charlton, a painfully awkward taxman who has arrived to find out why no tax returns have been submitted by the family. Shrunken, shy and quietly depressed, Cedric (or Charley, as he is swiftly christened) is taken under the wing of this gregarious family, invited to stay for dinner and (when it grows too late for the bus, and then the train, back to London) given a bed on the billiard table. Over the next few days, Charley struggles to remember his duties as a taxman, while comparing his dull, beige office life with the cheerfully voluptuous pleasures of the countryside. Seduced on one side by the Larkins’ openness and charm, by vast dinners piled with roasts and vegetables, by fantastical cocktails conjured up by Pa from the galleon-shaped cocktail cabinet, and – more literally – by the dark-eyed, sensuous eldest daughter Mariette – Charley simply doesn’t have a hope. Before long, tiny details like the possession of a motor-boat or a Rolls Royce cease to register with him, and he becomes sucked into the pastoral idyll of this little paradise in 1950s Kent.

If there is any plot, then it’s the way that Charley slowly but surely falls in love with Mariette and with the rest of her oversized, generous family. I hadn’t remembered, of course, that initially Ma and Pa almost engineer his fondness for Mariette, as they believe that she is pregnant (she’s not entirely sure of the father, although that doesn’t really matter in this family, which lives as if in an antediluvian state of grace). Yet even this engineering is done gently and with affection. There are sublime afternoons of fruit-picking and long, lazy afternoons walking in the woods to hear the nightingales, or investigating the finer points of buttercup fields. Naturally, none of the children appear to go to school. It’s as if Charley has passed into another world, another dimension, far from his familiar existence of smoke, soot and deadlines. Everything is easy, bountiful and welcomed with laughter and merriment. The Larkins can’t bear to see anyone unhappy or lonely: strays are welcomed at their table and they act with extravagant neighbourliness, whether that’s to the Brigadier, whose poverty-stricken cold cuts are alleviated by helpings of dripping roast meat and lard-smothered potatoes, or to the spinster Miss Pilchester, whose lonely existence is warmed by Pa’s generous flirtation – tacitly encouraged by Ma, who knows she’s in no danger.

Indeed, there’s something positively divine about the Larkins – and I say that in the sense of a pantheon. Their world – for all that it’s littered with Pa’s leavings as a scrap dealer – is like a little heaven set amid a universe of troubles that simply pass them by. Everything is simple and easy. Ma reigns supreme, producing fantastic meals effortlessly to feed armies of hungry mouths, like some beaming Gaia of a mother-goddess, while Pa is like a skinny, shrewd trickster god, all sparkling eyes and mischief. Mariette is a doe-eyed, captivating Venus, irresistible to Charley’s emaciated senses – and yet there’s no suggestion that their connection is anything but true love. And that’s what’s so delightful. This is a world where love reigns in all its forms: as friendship, as love of one’s fellow man, as romance or desire. I was reading an article recently which suggested that Morticia and Gomez Addams were among the fictional couples who presented an exemplar of the ideal relationship. While I have some issues about the degree to which Ma’s tied to the kitchen, she seems to love it and thrive on it, and so I would say that she and Pa have a similarly positive, inspiring relationship – full of trust, love and passion, spilling over to encompass their children and anyone else they take under their wing.

I needed this book at the moment, to give me a lazy splash of golden sunlight, hazy afternoons and peaceful countryside in the middle of a rather chilly stretch of weather. It’s sheer delight – escapism of the very best kind, hinting at the perfections of an age that never was. I’m now torn whether to go straight onto the next book or start watching the TV series. Either way, I think I’m guaranteed a heartwarming, indulgent treat. Perfick.

Larkin by name, Larkin by nature: Pa, Ma and all the gang in a still from the TV series