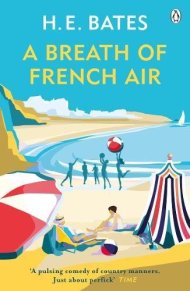 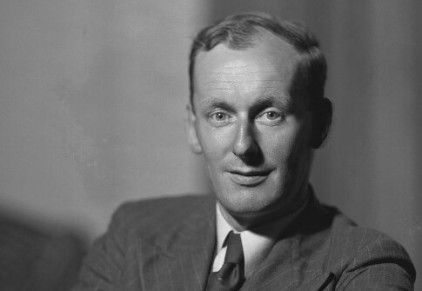 All might be radiant and perfick in the Kent countryside, but everyone needs a holiday now and again. With Mariette wilting under low spirits, and Ma growing weary of her newborn Oscar’s incessant demands for milk, Pa lets himself be convinced that they could really do with a trip to France. It does require persuasion, of course, because Pa finds it hard to believe that anywhere could be more lovely than home – but the one thing he loves more than home is his family, and he’s willing to do anything to make them happy. Encouraged by the enthusiastic Charley – who spent summers in Brittany as a child – Pa begins to pick up a few useful phrases of French, and the whole Larkin family piles into the Rolls and sets off for a spot of continental leisure.

I can’t help feeling that the Larkin farm was part of the charm of the first book – its existence in an unspoiled piece of English countryside; the meadows and the woods and the nightingales – and so it felt odd to see the family transplanted somewhere else. By bringing his bucolic characters out of their Eden, Bates unfortunately loses some of their appeal – but, no doubt, a change is as good as a rest. And the Larkins retain their generous charisma, arriving in the faded Hotel Beau Rivage in St Pierre le Port like a visitation. Despite the best efforts of traditionally contemptuous French hospitality, and the shocking discovery that Ma and Pa Larkin aren’t actually married, the family’s sheer force of personality wins out. The Hotel Beau Rivage will never be the same again.

The underlying theme of this book seems to be Charley’s gradual assimilation into the family, not just as a beloved guest but as a permanent fixture, as son-in-law. His marriage with Mariette has brought him into the Larkin pantheon, but Pa especially is still trying to figure him out. After all, Charley is so very different from Pa himself – pinched where Pa is expansive, shy where Pa is confident, awkward where Pa is blissfully nonchalant. And Pa worries, most of all, that Charley hasn’t quite got the hang of this marriage thing. It’s been a year and Mariette still isn’t showing any signs of having a baby. And, as the bronzed French youths on the beach home in on the gorgeously nubile Mariette, Pa begins to fret that Charley is going to need a bit of a friendly word in the ear.

While Charley fumbles his way through the task of being a husband, Pa continues to spread his beneficent flirtation far and wide, with Ma’s full knowledge and indulgence. Pa flirts in the way that other people might volunteer: as a social service and a way to improve the sum happiness of humanity. As soon as he arrives at the Hotel Beau Rivage, his eye falls on the lonely spinster proprietor, Mademoiselle Dupont, who would clearly benefit from a bit of pep. And – because Brittany’s a small place – it just so happens that Pa’s old sparring partner Angela Snow is also in town, ready to urge him on to all kinds of mischief. At the centre of this flurry of female hearts, Ma reposes like an ancient earth goddess, calm and smiling and confident in her hold on her man – while Pa does his best to spread the Larkin love and magic in this rather dull and damp little corner of France.

It would, surely, be impossible not to enjoy a Larkin novel, and it feels pusillanimous to grumble, but I did feel that this one suffered by being taken away from its idyllic English setting. The Larkins make most sense at home and here there are moments when the novel becomes a simple comedy of French-versus-English manners. (There are also bizarre moments, as when Ma and Pa blithely leave their eleven-year-old daughter behind with her holiday crush. But then, times were different in the 1950s.) Having said all this, Bates underpins the merriment with a poignant thread: Charley’s transformation on coming back to a place that meant so much to him as a boy, and which gave him a rare flash of adventure in what seems otherwise to have been a very sterile childhood. Perhaps it’s only here, in deepest connection with his inner self, that Charley can finally begin to become the man, the lover and the husband that all the Larkins hope he will be.

One can’t fault the book for its cheer and Gallic charm, but I hope that the next in the series will bring us back to Kent, where the Larkins belong…