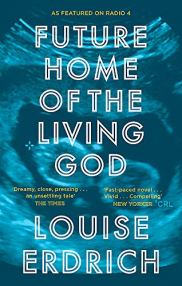 A dystopian future; a world in flux, where fertility has rapidly declined and pregnant women are hunted down by the State: Louise Erdrich’s novel certainly has a fair bit in common with The Handmaid’s Tale. And yet it is distinguished by a fascinating concept (which unfortunately isn’t explored in anywhere near enough detail): evolution has, quite suddenly, just stopped and quietly gone into reverse. As the flora and fauna of North America begin to regress to prehistoric forms, the State grows increasingly anxious about the nature of the babies being born. Pregnant women are gathered together, so that their children can be monitored, but as birth becomes more difficult, fewer and fewer women survive these State interventions. And yet the State keeps searching. And, for Cedar Hawk Songmaker, it’s about to get very personal.

Cedar is of native American Ojibwe heritage and her hippyish adoptive parents have made every effort to keep her in touch with her traditions. When Cedar realises that she is four months pregnant, she decides that she needs to make contact with her birth family to understand where she – and her baby – come from; only to discover the unromantic and down-to-earth Potts family, who nevertheless embrace this new member. Cedar feels that her past is beginning to make more sense; but what about her future? As her baby grows, she starts a journal recounting ‘his’ growth and recording her struggles in an increasingly dangerous world. Despite the efforts of her parents, and her baby’s father Phil, Cedar is soon on the radar of the all-seeing State. Initial messages of benign concern become increasingly imperative, and soon Cedar realises that her only hope is to be smuggled to safety. But how? Who can she trust, in a world where anyone might be a spy willing to inform on a pregnant woman carrying a baby which could, quite possibly, be some kind of evolutionary regressive?

The funny thing is that this book isn’t a breathless tale of escape and subterfuge. It’s more interested in the link between mother and child, and in the way that Cedar faithfully documents her baby’s development from bundle of cells to recognisable human. Her own links with her birth and adoptive mothers prove equally important in forming the network which supports and tries to save her. But the primary mood of the book is introspection, even in its most fraught moments: a preoccupied dreaminess, stimulated further by Cedar’s profound Catholic faith. This has a poetic appeal, it’s true, but it means that – probably deliberately – the extraordinary events going on around Cedar are barely registered. We glimpse a sabre-toothed cat roaming the backyards, snacking on family dogs; the startling rustle of a kind of archaeopteryx in the undergrowth. But these are interruptions to the timeless bond between mother and child that dominates the story. As I said, I suspect this is deliberate. But it does grow a little frustrating when, like a tourist in an unfamiliar country, you want to see the bizarre, the unexpected, the evolutionary regressive. It sometimes feels that Erdrich is teasing you with a world that she doesn’t intend to ever show in full.

I know that I latch onto unimportant aspects of books. Everyone else will be looking one way, admiring the main event, while I’m poking around in the verges getting frustrated by things. But that’s the way I am. Here, for example, I accept that the main theme is about women’s eternal mystery, and the futility of State trying to control Life. But what about that evolutionary background? (“Yes, yes, babies, very nice; but look! Dinosaurs!!!”) How long has it been since the regression has been noticed? Let’s say a few years, because it would’ve taken a while for the vague hum of unease to transform into full-on locked-down terror. So in just a few years, common cats have regressed to being sabre-toothed tigers (42 million years ago) and birds have transformed into archaeopteryx (150 million years ago). And, incidentally, there doesn’t seem to be an intermediary stage – from what Cedar tells us, it’s as abrupt as cute little sparrows one moment and scaly semi-dinosaurs the next. And it also seems that not all members of a particular animal family are regressing at the same rate – not to mention different animal families.

Clearly there is no single timeline of evolutionary regression. Do birds regress more quickly because they breed more quickly? If the sabre-toothed cat is perched in a tree munching on a chocolate Labrador, why hasn’t the Labrador regressed as well? And how is it possible that humans are only just beginning to show signs of evolutionary regression when, on that same timescale, women should be giving birth to babies so far back along the human evolutionary timeline that they haven’t even evolved into Australopithecus (which, for comparison, lived between 3 and 4 million years ago)? Is evolution meant to be taking a scattergun approach here, a kind of ‘lucky dip’ approach where the next generation might fit in at any point over the last 150 million years? I wanted to understand this better – it’s such an interesting idea that I really, really wanted there to be more of it, but it just ended up feeling like a ‘hook’ that wasn’t explored to its full potential. And that was annoying, because there was such potential.

While the book is certainly poignant and beautifully-written, I did find those gaps a little frustrating and, at the risk of spoilers, I found the end very anticlimactic. After a book such as this, the reader deserves some answers or closure of some kind, surely? However, I suspect many of my issues were simply down to my own preferences and I others may find it more fulsomely rewarding. I’d be interested to get thoughts from anyone else who’s read it, actually, to see whether you agree with me or not.