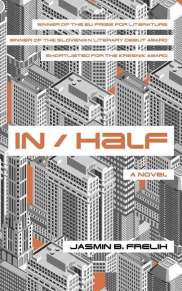 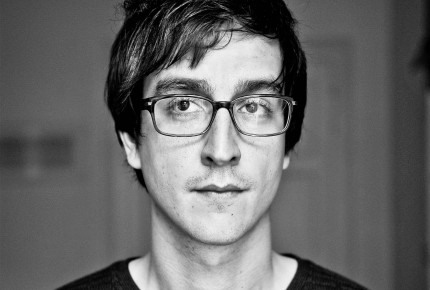 It takes a lot for me not to finish a book. In the past, I’ve forced myself through novels in the hope they’ll suddenly improve, because I hate leaving things incomplete. But now, dear reader, I have been defeated. Perhaps it’s my time of life. Being in your mid-thirties brings a deeper awareness of mortality, and the fact that time is finite. Perhaps I have less free time than I used to have, and am disinclined to spend that time on things that don’t actually bring me pleasure. Or perhaps it really is the case that this book, like an obnoxious person at a party, just wants to show off that it’s far cleverer than anyone else in the room. That’s how it felt to me, much of the time. And so, in the interests of a full disclaimer, this is not technically a book review because I’ve stalled at 30%.

Should you wish to read this book, please read the blurb first. Usually I leap straight into books, knowing nothing about them, but that proved problematic here. I’d asked for a galley of In/Half because I read that it was by a promising young Slovenian author and had won a European book prize. Since I’m trying to read more widely at the moment, I thought this would be a good opportunity. Without the blurb, however, I felt instantly confused; things were only resolved by looking up the book on Amazon, to find out what I was actually reading. So here is what you should know: the book is set 25 years in the future, so the world is pretty much the one we know, with one key difference. Here, global communications were severed in 2011 (the date of the book’s original publication in Slovenia). In/Half looks at how people have adapted to a world in which instantaneous knowledge, access, contact, have all been snatched away. One region is isolated from another. Based on the 30% of the book that I have read, it seems to be interested in the way that interpersonal connections are also shrivelling up. Every man has become his own island, strangled by his own desires and unable to relate to those around him as anything more than mechanisms for his own satisfaction. I grant you: in itself, this sounds intriguing. Not a bad idea. The profound difficulty that I faced with this book lies in the execution of that idea.

We encounter a series of extended vignettes, following various characters as they negotiate this rather depressing future. So far I’ve encountered three ‘vignettes’ or sections. The first focuses on a single character; the second revolves around a family; and the third seems to embrace an entire city within its scope, careening here and there across New York. Is it significant that the scope seems to be broadening each time? It could be, but I’m not feeling masochistic enough to find out at the moment. Perhaps we stick with these three groups of people. Perhaps the book’s scope continues to widen. Maybe the fourth section covers the entire earth; perhaps the fifth takes us out into space where, among the stars, aliens have pretentious debates while stoned on intergalactic drugs. Who knows? Anything is possible. But the major problem with leaping from one character to another is that the reader finds it impossible to build a ‘relationship’ with any one of them. That becomes even more difficult when the characters are so deliberately unsympathetic as these seem to be.

When dealing with a translated work, it’s always hard to judge which of the issues (or successes) are due to the author’s original text, and which have been introduced by the translator’s rendition into English. Unfortunately my disillusionment with this book was swift: my frustration blossomed on reading the opening lines, in which we see our first character – Evan, a cynical, self-centred and misogynistic theatre director – undertaking his morning ablutions. Every act is described with the careful reverence of a religious rite. Perhaps it’s meant to be ironic but sadly, considering the self-consciously intellectual ‘artistry’ of the book as a whole, I doubt it. This are the first few lines:

Desire is a rift. Dental floss was stuck between Evan’s teeth. Hot water ran from the tap. Instead of a mirror a void on the wall. Jars of cream on the shelf. The toothbrush quivered. Steam rose. We are alone and we are all of us strangers. The rift widens, the hole deepens. A few hairs remained on the comb. Evan’s urine was thick and yellow. The water tasted of pipes. The marble was expensive and cold.

Of course, one could argue that the focus on mundane minutiae tells us something about Evan as a character, and his unjustifiably inflated ego. I wasn’t able to focus on the story, though, because the disjointed sentence structure started to feel rather like Chinese water torture. Luckily, a few longer sentences did wrestle their way into the mix eventually, but by that point I already felt that the point of the book was to be experimental rather than to be enjoyable. It’s an impression that was, alas, compounded by other sections. First, however, we follow Evan as he drifts through the monotony of his day, self-absorbed and arrogant, inwardly smirking at his superiority to everyone around him while craving his next score. Exploitative and scornful, he is trapped in an ex-pat limbo of his own choosing. Next up we meet the Wolf clan, holding a birthday party for the head of their family. It’s meant to be a happy occasion, but the long-standing grudges between various members of the group turn this dinner into chaos. We don’t spend long enough with any one person to be sure who will take the story forward. Instead we ricochet from one to the next, trying to understand what we’re meant to be gleaning from this deeply uncomfortable reunion.

Finally (in my reading, anyway), we move to New York. Here the book seemed to be in its element, reporting snatches of stream-of-consciousness, diving in and out of various characters’ lives and offering up snatches of completely bewildering dialogues. At the centre of it all is Zoja, a reclusive but internationally famous poet, who has agreed to give a rare live reading to a starstruck crowd. While she has absent-minded conversations with her new lover, the organiser of the event waits, anxiously, for everything to come together and for his name to be made. And then we have other occasional viewpoints, such as that of the repulsive Ludovico, who keeps frozen cats in his apartment and enjoys tormenting prostitutes. All three storylines in the novel (so far) are connected by the receipt of mysterious plane tickets – which may end up reuniting together people who have been so profoundly separated from one another. Again, I really don’t have the energy to find out. Why else should I care about these people, other than the fact they’ve all been sent plane tickets which might as well have written on them, ‘Be excited! I am a plot device!’? None of the characters felt remotely interesting to me, and they are mummified within prose which is too busy being ‘profound’ to bother telling a good story. All three sections are peppered with statements like this:

Closing ourselves into the mould of bourgeois relational form leaves us lonely, weak, worthless and at the same time firmly convinced of the illusion of control over our own existence.

And characters tend to fall into conversations which don’t sound like anything a real person would actually say. I lost patience with this kind of thing a long time ago. Here is a sample:

‘Would you rather see … everyone immersed in their own imperfection? Humanity as a long procession of mourning ruins? Isn’t an intervention into reality possible also from a position of brokenness? The way I see it, everything’s a projection. You see yourself torn, along with the uniform. You could simply change perspective. Say that identity is a leaking ship and the person, through intervention, is the vehicle of coherence. You just have to permit yourself to intervene. Then it doesn’t matter whether or not you’re dispersed’.

It’s a flaw in my own intelligence, clearly, but I don’t find this rewarding. I feel bad saying it, but I found large parts of the book alienating and smug, and I don’t really want to hang around to find out what happens in the next two-thirds. I can usually tell if I’m going to ‘get on with’ a book by the end of the first page (so I should have paid attention to my misgivings stated above). By a third of the way in, I should be gripped, or at least have a clear sense of where the book is going. Ideally, I should also feel some kind of human connection with the characters, and I stress, that doesn’t mean I have to like them: in the past, I’ve happily engaged with characters who are total bastards. I didn’t feel any of that here. Instead, I felt that neither the characters nor the narrative had the chance to breathe, being overshadowed by the book’s attempt to be ever-so-progressive and experimental. Cleverness at the expense of soul.

I have been harsh with my rating, I admit. And I have toned down my original draft post, which came from a place of extreme exasperation. But this is a personal opinion: this is the only book I’ve ever requested from Netgalley that I have not finished (as opposed to not read yet – bit of a backlog), and that has to be acknowledged in the rating. The book has won prizes, so there are clearly people out there who enjoyed it (or who said they did, thinking it’d make them look smart). But I’m not one of them. Nor am I the only dissenting voice. There are plenty of other people, on both LibraryThing and Goodreads, who simply don’t get it. This seems to be part of a trend with prize-winning books in the last few years. I’m not sure which criteria are used for the prizes, but in several cases I’ve felt that a much-garlanded novel fails at the most basic level of ‘good’ literature, in the sense of something that enriches the soul and captivates the mind. This is one such case and, despite my best efforts, I’ve decided to put In/Half aside. I’m sure there will be glowing critical reviews, but life is too short to force myself through something which is actively frustrating me. I love my Kindle far too much to throw it across the room.

If anyone has made it past 30%, please do let us know if it was worth it. I hear that the final chapter is a whole other level of WTF, so you’ve got a treat in store if you’re determined to make it to the end.