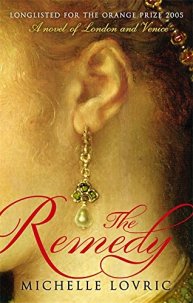 Venetian convents are famous above all things for their laxity, with sweets and cakes; visitors; fine fashions; and beautiful music. But the headstrong young woman we meet at the start of The Remedy isn’t interested in the things that come in to the convent, so much as in how to get out. She has been confined within the walls of S. Zaccaria by her noble parents, quite unfairly of course, after allegedly bringing shame on the family. Since good behaviour hasn’t made an ounce of difference to her prospects, bad behaviour might just be her ticket back out into the world. After all, everyone knows that discerning gentlemen can make donations to certain convents in exchange for the company of nuns. Such arrangements take place at S. Zaccaria and our narrator is confident that her well-bred beauty will find her a lover who’ll whisk her away. Alas! When her plans are betrayed, leaving her ruined and furious, our narrator’s prospects seem darker than ever. But then the state’s spymasters make her an offer she can’t refuse: to have her crimes wiped clean in return for service as one of their agents. A pitch-perfect tale of double-dealing, murder, sex, and opera in 18th-century Venice and London, written in sumptuous prose, this deeply satisfying period romp never quite lets you forget the grit under its fingernails.

No one is who they say they are. At least, not in the shabby borough of Southwark, south of the Thames in London, where quacks, blackguards and villains of every stripe live in jostling, clamorous intensity. Their liege-lord is Valentine Greatrakes, an Irish chancer who has learned to ape the manners and lifestyle of a gentleman, thanks to the money he makes off the back of selling elixirs to the gullible masses. Valentine has no deep attachments in this world, save to his old friend Tom – now sadly deceased – and Tom’s pugnacious, spiteful daughter Pevenche, who is now Valentine’s ward. But then, one night at the opera, he witnesses a sensual performance by the newly-arrived Venetian soprano Mimosina Dolcezza. He is ravished. He must have her! And thus begins a pas de deux in which each participant is blissfully, charmingly misled by the other, falling into a dance of lust, lies and expectations which can only end in disappointment. For, in this world where all is illusion, can true love really flourish and survive?

I read Lovric’s first book, Casanova, while I was still at school and I remember being struck by the palpable eroticism of her prose. The Remedy was originally published in 2005 and has much the same richness of both style and character, though I fancy that the protagonists here are far more complex (there isn’t a truly good person among the whole bunch of them, and the novel is far more enjoyable for that). Much of the book’s joy comes from watching Valentine and his ‘Mimosina’ delicately fencing with their secrets, hinting and lying, both of them with immediately engaging narrative voices (they take turns to narrate sections). We also hear occasional bursts of indignation from the brattish Pevenche, who is surely one of the most monstrous characters I’ve read about. And each chapter begins with a recipe for a medicine or elixir, giving us a glimpse into Valentine’s business and hinting at the unfailing allure of products which promise to make us healthier, wiser, more attractive or long-lived. I think these are taken from actual historical texts, and they add another level of detail to a world that already throbs with vigour. To get an idea of Lovric’s style, imagine Philippa Gregory crossed with Anne Rice, but writing in a world where everything is just that little bit shabbier than it pretends to be, and where our characters’ glamorous personas teeter on the brink, only one misstep away from being revealed in all their tawdry artifice.

Things have been rather busy here recently, so it’s been lovely to have a book that I can really get my teeth into, and which immediately snatched me away into the shadier regions of the 18th-century. Yes, it’s rather melodramatic, highly-flavoured and perhaps a bit far-fetched, but it’s done so well that you don’t really notice; and the characters are as far from sentimental as you can get. Lovric is also a deeply conscientious writer, as you can judge from her exemplary historical note at the end of the book, which throws up various fascinating historical trivia, such as the fact that the superbly-named Valentine Greatrakes actually existed (though not quite in the form he takes here). Highly recommended for those who need a bit of distraction, and who’d appreciate the odd flash of a glass stiletto in the shadows, alongside ripped bodices and crumpled silks. Shades of Slammerkin, The Crimson Petal and the White, The Vizard Mask and perhaps Ace, King, Knave… with added opera. What’s not to like?