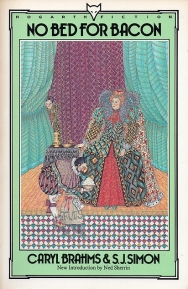 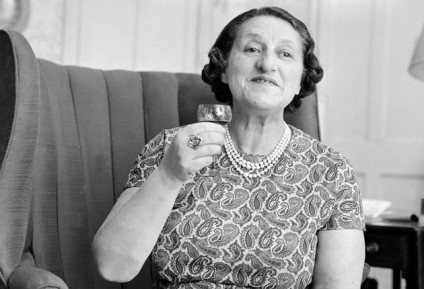 The epigraph page of No Bed for Bacon bears a Warning to Scholars: ‘This book is fundamentally unsound’. It may be so, but it’s both fun and, surely, hugely influential. Written in the course of several frenzied months in 1940, this historical farce imagines the London of Queen Elizabeth I at just the time that so many parts of the city were being destroyed in the Blitz. The two authors, both of whom were serving as air raid wardens, often had only an hour or so together each day to exchange ideas, and were reduced to leaving cryptic notes for one another in their wardens’ log-book. Though they squabbled passionately, and at one point considered taking out a legal injunction to prevent them ever having to work together again, they managed to produce a work of high British silliness. At its heart is Francis Bacon, an ambitious courtier who wants nothing more than to be awarded one of Gloriana’s beds from her progresses, so that he can pass it down to his heirs as an investment. Across town, the rival impresarios Philip Henslowe and Richard Burbage strive for theatrical domination, while the author Will Shakespeare is struggling to find a suitable opening for his new play Love’s Labours Won. A young aristocrat, Viola Compton, dreams of becoming an actor. And, at court, Sir Walter Raleigh plans for the greatest day of his life: the ceremonial tasting of the first potato from the New World. If only he can find a new cloak elegant enough to wear…

If some of this sounds familiar, it’s probably because you’re thinking of Shakespeare in Love – which, indeed, has the central theme of a rich young woman named Viola disguising herself as a boy-actor and falling in love with Shakespeare. Remarkably, the original development of the film took place without any knowledge of the book, although Ned Sherrin (who wrote the brief introduction to my edition) lent the novel to Tom Stoppard while he was refining the screenplay. But, to me, No Bed for Bacon’s most loyal successor isn’t Shakespeare in Love, with its grand romance and sentiment, but Season 2 of Blackadder. There you have the same absurdities, the devoted foolishness, and the clever in-jokes: No Bed for Bacon, like Blackadder, is aimed at an audience which knows a fair bit about Elizabethan England, and Shakespeare. Names make cheerful cameos: Dame Quickly, the stern mistress of an actor’s lodging-house; or Polonius Bounce, the Master of the Revels. Theatre rehearsals are disrupted by clowns with ambitious ideas for gravedigger scenes, jigs, and the forerunner of a custard pie act. And the cast is full of familiar faces, from Sir Philip Sidney to Walsingham and Francis Drake.

There isn’t really a central narrative: this isn’t so much a plot that leads from A to Z as a chance to revel in various vignettes of Elizabethan life; to peep down from the gallery at rehearsals in the theatre; to catch a glimpse of Elizabeth I throwing a strop at having nothing to wear (despite a vast collection of gowns, and a wardrobe mistress at the edge of her patience); and to wander in the streets of Southwark. The speed of the book’s production shows in its cheerfully madcap quality, with ideas and one-liners leaping out at you, almost as if the authors are trying to outdo one another. Great figures of history are cheerfully brought down a peg or two (or more, if we consider Raleigh, who spends the entire book yearning after a suitable cloak. The reader just knows that, should such an item ever be obtained, there will inevitably be a puddle and an impatient queen somewhere nearby). And there are plenty of jokes about Shakespeare, whether it’s about the spelling of his name (he spends a long time practising his signature), or his authorship (the authors teasingly nod to theories about Bacon), or the provenance of that famous ‘second best bed’ from his will.

I should have loved it; and yet I wasn’t quite as delighted by it as I thought I’d be. It works hard for its effects and, when it was published in 1941, it must have been dazzlingly original (challenged only by the same authors’ earlier collaboration, the 1940 Don’t, Mr Disraeli!). But the speed of its composition, and the pressure placed on the authors by their publisher, results in something like a firework display: a bevvy of sparkling ideas, flung out every which way, but rarely lingering for more than a few seconds. That was probably perfect for the time it was published: in the depths of the Blitz, high-concept, high-octane silliness, celebrating the Golden Age of British culture, would have been just the ticket. Nowadays, in some parts, it feels a little thin. It’s also a victim of its own success. Reading it in 2020 is to read it in the light of all the things it has spawned and inspired, if only indirectly, and the problem is that – for me, anyway – Blackadder is funnier, and does the same thing better. In an ideal world, of course, we’d be able to strip away our awareness of what has happened since a book was written, and to judge it as audiences at the time would have done; but that’s often beyond the abilities of a reader who has come to a novel looking for simple escapism.

I’m not saying that this isn’t funny. It is. It has a silly, smart, undergraduate kind of humour, and I think I would have fallen in love with it if I’d read it when I was eighteen or nineteen. But it isn’t completely satisfying. It trots out a series of comic scenes with a pageant’s superficiality, stuffing them with jokes and dramatic irony, but without much substance. That will be delightful for some people, who don’t want to wade through a heavy historical novel. It’s good for reading on a journey or commute, because you don’t have to do much work as the reader (except, perhaps, gen up on your Tudor history beforehand). And it’s a milestone in British comic fiction. It’s definitely worth a read, but I think the trick is to come to it without any expectations (forget Shakespeare in Love; forget Blackadder) and just prepare yourself for a nonsensical canter through Merrie England.

Unfortunately I couldn’t find a photo of S.J. Simon, so I’ve just used a picture of Caryl Brahms. Do let me know if you can point me towards one of Simon.