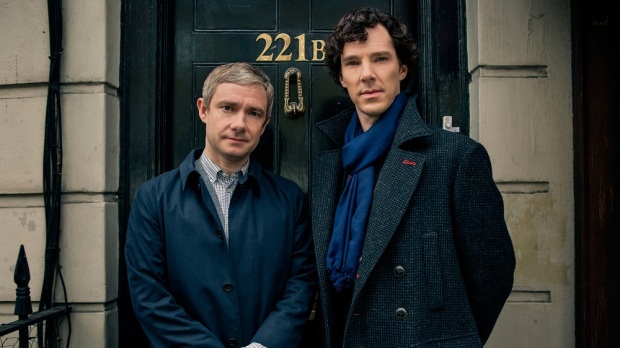 How on earth did I manage to miss the first season of Sherlock?  Mark Gatiss’s and Stephen Moffat’s sleek, modern take on Arthur Conan Doyle’s stories has been catapulted into the stratosphere of cult shows over the last few months.  I feel very much like a latecomer at the party.  Over the Christmas holidays I watched the first and last episodes of Series 2, which was enough to get me absolutely hooked.  After watching The Reichenbach Fall, I spent hours reading through comments on news websites, trying to figure out how he did ‘it’.  My wonderful parents bought me the Series 1 and 2 boxset for my birthday and, since then, I’ve been luxuriating in this marvellous programme, which has rekindled the kind of geekish fervour I previously reserved for The Lord of the Rings.

It would have been very easy for Gatiss and Moffat to mess this up.  Playing with such cherished fictional characters is extremely dangerous and I can only applaud them for having the courage to conceive of such an update.  As everyone is saying, they’ve created a masterpiece.  It may well be that, four series and three Christmas specials in the future, we all get thoroughly fed up of Sherlock, but at the moment I’m rapt.  The writing is taut, carefully calibrated and very clever.  The writers really seem to care about preserving the feel of Conan Doyle’s work, and I’m sure there are lots of in-jokes which I’ve missed, having been only an occasional reader of the original stories.

It’s ironic, really, that Series 2 of Sherlock was screened at the same time that Guy Ritchie’s big-screen Sherlock Holmes: A Game of Shadows was released.  The comparison leaves Hollywood wanting.  Much as I enjoy Robert Downey Junior’s manic take on Sherlock Holmes, he’s left stranded by the lack of any sensible plot, and the element of detective work in the film seemed to have been entirely replaced by prolonged shots of guns and missiles.  The BBC’s super-cool geek-chic is much more up my street.

At heart, the BBC’s Sherlock is a real character piece, where the action and gadgets merely serve to show off Sherlock’s occasionally obnoxious brilliance.  Benedict Cumberbatch absolutely dominates the screen and his rapport with Martin Freeman’s affable John Watson is believable and, in the last episode, very moving.  That final episode of Series 2 was the culmination of a consistently very high standard of acting, and I just pray that everyone keeps it up in the third series.  Until then, we may have to satisfy our Cumberbatch / Freeman cravings elsewhere: they will both appear in The Hobbit, the first instalment of which hits cinemas this December.  Freeman is Bilbo Baggins, of course, while Cumberbatch is providing the voice and motion-capture for Smaug.