Precisely focused both in historical period and subject, this exhibition gives a glimpse of the social culture of swordsmanship that existed in Europe between about 1550 and 1610. It traces the development of the rapier from the broader, shorter swords of the early Renaissance and late medieval period. This wasn’t just a stylistic development: it heralded a completely different approach to the handling of the sword.

The blade changed from a flat, wide cutting weapon to a long, tapering, needle-thin stabbing spike. Complementing this development, the exhibition displays a number of contemporary fencing manuals, which offered diverse theories about the best positions to fight in, and the best way to handle your weapon. The later works tended to move from the pragmatic to the intellectual, advising the fencer to think through his movements mathematically. He should imagine a geometric plane and aim to place himself at a particular point relative to his adversary, in order to gain the best advantage from his attack. Call me cynical, but I can’t help feeling that in the middle of a duel you should probably be focusing on the person trying to kill you, as opposed to undertaking geometrical calculations, but perhaps that’s just me.

The highlight of the exhibition is the range of rapiers the Wallace Collection have gathered together, from their own collection, from the Royal Armouries, and from other collections. In the first of the two small rooms, a case presents a veritable bouquet of rapiers, mounted with points upward, to display the dazzlingly beautiful craftsmanship of the pommels, hilts and guards.  One guard was inlaid with gold; another worked with acanthus leaves; a third had been pierced and worked to look like a petrified chain which swirled about the owner’s hand. Throughout, the overpowering message is that these were not simply – or, in some cases, even – weapons but fashion accessories: a gentleman’s way to show his social status and wealth. The curators note that, in medieval society, a knight would never have worn his war-sword in polite company but, by the 16th century, to do so was the mark of a gentleman. The very wealthiest had swords made to match their dress clothes, like Christian II, Elector of Saxony.  In circa 1605 this rather ample-figured lord had a splendid suit made of blue silk and silver thread, which is also in the exhibition, and to complement his outfit he ordered a new rapier, its hilt inlaid with blue enamel and silver. 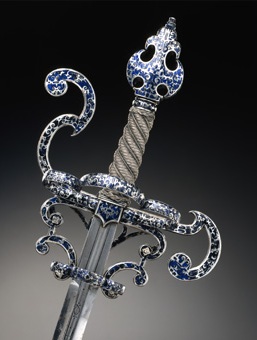 The rapier hilt made for Christian II, Elector of Saxony, to match his new court suit

The stunning blue silk court suit made for Christian II, Elector of Saxony

The Wallace exhibition focuses on the craftsmanship and elegance of these weapons, but there is another story simmering underneath.  Rich men paraded around with their coordinating doublets and weapons, but rich men weren’t the only ones who had rapiers; and, as ever, it was everyone else that you had to worry about. Rapiers were often sold with matching daggers, which for the rich served as accessories, but which out on the street became auxiliary weapons, to hold off an opponent or stab him at close range. Those without daggers still used bucklers – I don’t recall ever actually having seen a buckler before and I certainly hadn’t realised they were still used at the beginning of the 17th century. The exhibition has a particularly nasty example on view: worn on the belt and about the size of a tea-plate, it has been crafted with a low but potentially very unpleasant spike in the centre. You could snatch it off your belt and use it either as a defensive weapon, like a small shield, or as an offensive weapon to bash into your enemy’s face to distract him while you angled for a way to use your rapier. Suddenly the etymology of the word ‘swash-buckler’ acquires rather more violent connotations.

Unlike the older swords which they replaced in popularity, rapiers were not battle weapons. They were for duels, street-fights and private vendettas. By 1600, laws were being brought in to regulate their length, although these could be evaded: the exhibition has a rather wonderful example of a spring-loaded rapier where, at the touch of a button, the hilt suddenly extends by about a foot, adding that crucial extra reach to your thrust at your enemy.  It’s utterly fascinating. I was just a little sad that it was such a small show, but the Wallace Collection’s temporary display galleries are fairly snug and there wouldn’t have been space for much more.  In fact, the intimate rooms, dimly lit with their glass cases, are perfect for examining the fine detail of beautiful objects like this.  It’s a real treat and, even better, it’s free.  I have my eye on the catalogue, and I know that I can only hold out for so long.  The exhibition offers a new angle on the history of Renaissance costume and, besides, the catalogue seems to include a number of good essays.

While I’m caught up in all things sword-related, I just want to call your attention to this company, who will run a historical swordsmanship day at the Wallace in September and who sound completely awesome – The School of the Sword.  According to their website, they teach and practice Italian swordsmanship of the 16th and 17th centuries, covering the following disciplines: ‘single sword, sword and buckler, sword and dagger, sword and cloak, dagger and cloak, unarmed combat, two handed great sword and the use of two swords at once.’  They also – it just gets better – teach flag flourishing, presumably in the manner of the Sienese on Palio day.  What an amazing job that must be.  Why did they never mention that in the careers sessions during my History degree?

Rapier made for the future Holy Roman Emperor Maximilian II. The hilt is Spanish or Italian and the blade is by Antonio Piccinino of Milan, c.1550–70 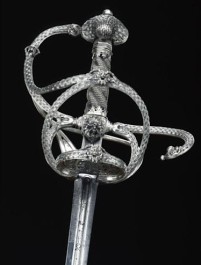 Rapier owned by the Electors of Saxony, made in Dresden

Rapier with English hilt and German blade, made c.1610

5 thoughts on “The Noble Art of the Sword: Fashion and Fencing in Renaissance Europe (2012)”