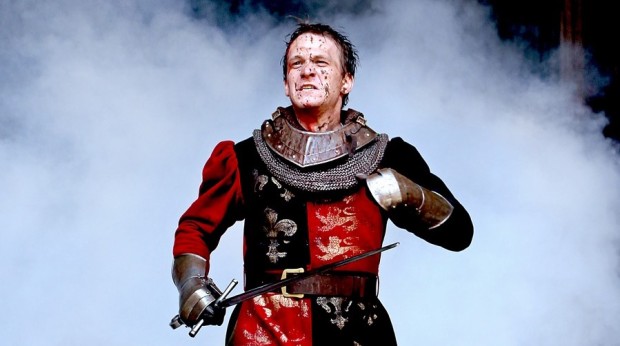 A visit to the Globe is always a treat. No matter what you go to see, the setting is an experience in itself. You will know it by now, from pictures if not from your own visits: the stage with its golden columns and painted ceiling, embraced by the galleries with their stout posts and hard wooden benches; the pit open to the skies. The play opens with trumpeters and music – there is no curtain – and always closes with a rousing country dance. My seat last night in the second row of the Lower Galleries was particularly splendid, giving me just gave me enough height to see over the heads of the intervening groundlings.  I even treated myself to the hire of a cushion (£1).

There is no other theatre in London like this. The actors push through the groundlings to get to the stage; they descend to tease an audience member or to make him the focus of a speech. Here, for an actor, there is no escape, because the sun beats down during the day and at night the same lights that illuminate the stage show the faces cramming the pit and the galleries. At the Globe, more than anywhere else in London, you can see what the audience thinks of you. And besides, actors at the Globe face problems that rarely trouble other London theatres: sirens, planes and the distant bells of St Paul’s across the Thames vie for the audience’s attention. Last night we had two low-flying helicopters, though both were brief and both providentially appeared during the Battle of Agincourt, so they felt appropriately martial.

Just in case anyone isn’t familiar with the story – though I imagine it’s unlikely – Henry V follows the formerly wild son of Henry IV as he comes to terms with kingship and faces the first serious test of his mettle against the French. Distancing himself from the companions of his misspent youth, Henry learns bitter lessons about the responsibility and loneliness of kings, but he also discovers within himself a brilliant gift for command. Inspiring his tired, sickly men in the heart of enemy country, he leads them to victory against incredible odds at the Battle of Agincourt (thanks to the English archers, of course, who aren’t much mentioned in the text). He succeeds in negotiating favourable terms with the French king, whose daughter Katherine becomes Henry’s wife, signalling hopes of a golden age to come, of peace and alliance between the two countries. 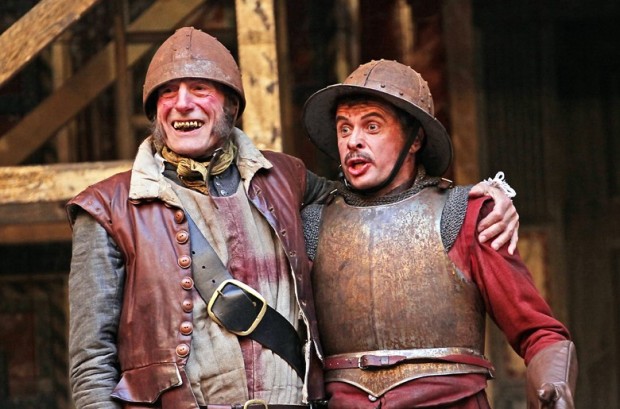 Reviews in the newspapers have noted that this is the perfect play for a time in which the English have once again discovered the joys of patriotism and a fondness for the monarchy (the Royal Wedding, the Jubilee, the Olympics), and in which we have our very own Prince Harry who seems to be shaking off his youthful indiscretions.*

I’ve never studied Henry V and, although it’s one of the handful of plays I know fairly well, that comes of watching and rewatching Kenneth Branagh’s film version. It’s natural that I made comparisons between the Globe’s performance and the film. To my delight, some of the scenes which I found rather dull in the film took on new life here. For example, every time Brendan O’Hea appeared on stage as Captain Fluellen I gave an inner cheer, because he had immense warmth and earnestness and he was also able to pitch his voice effortlessly to carry every word around the galleries. This was a rare enough quality to be worth mentioning: the only other actor who managed it last night was Kurt Egyiawan, whose dual performance as the Dauphin and Lord Scroop was a model of clarity.

O’Hea’s Fluellen is a puffed-up but rather lovable creature, knowledgeably enumerating the likenesses between Macedonia and Monmouth, and completely oblivious to his ridiculousness even towards the end, when he appeared with his helmet graced by a giant leek. In fact, the scene between the Welsh Fluellen, the Irish Captain MacMorris and the Scottish Captain Jamy was one of the most delicious: the humour relies mainly upon accents and they had decided to make Captain Jamy very affable but completely incomprehensible. These scenes, and those featuring Pistol, Nim and Bardolph, were played for laughs, full of the kind of rambunctious slapstick and physical comedy that works so perfectly at the Globe. 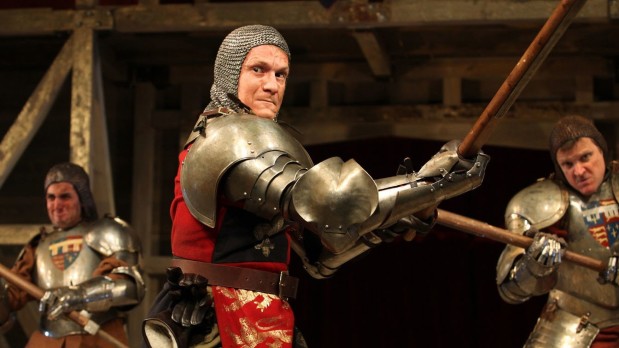 Time for a roll of honour. Brid Brennan played the Chorus as a kind of Everywoman, dressed in servant’s clothes and gifted with a wonderfully evocative delivery. On a bare wooden stage, as Shakespeare intended, she demanded that the audience use their imaginations to conjure up France, the fleet, the stamping horses and the battlefields. Her enthusiasm was infectious; I saw it all. Sam Cox played Pistol as a man convinced of his own significance, striking hammy attitudes and bantering with the officers – but in the final act, he convincingly moved from the mad comedy of the leek-eating scene to the pathos of the moment when he receives news of his  beloved Nell’s death, holding the audience rapt.

And then Olivia Ross, who played both the Boy and Princess Katherine… what to say of her, save that her performance was an astonishing stage debut and I want to see more of her very soon! As the Boy, she mockingly undermined Pistol’s pretensions, before being murdered on stage by the French; and as Princess Katherine she was perfection: skittish, girlish and mischievous, with a superb French accent. With her hair bound down her back in a Milanese-style coazzone, she looked just like Olivia Hussey in Zefferelli’s Romeo and Juliet. Hopefully we’ll be seeing her a lot more frequently from now on.

Jamie Parker has already played Prince Hal in previous Globe seasons and so Henry V is the natural progression. Interestingly, at 33 Parker is four years older than Branagh was when he played Henry on film (and five years older than the real Henry was when he triumphed at Agincourt). Yet he manages to convey a sense of uncertainty and fragility that is different from Branagh’s more hale and hearty performance.  Watching Parker, I felt that here was a king who was still very young; who was acting a part; whose mask was liable to crack when he was alone; and who still had enduring doubts and fears about his suitability to rule. I thought he did extremely well at switching between his ‘public’ and ‘private’ faces: his prayer before Agincourt, broken-voiced and almost trembling, showed us a man who was genuinely afraid; yet, moments later, when Gloucester enters, Henry snaps back into public mode, sweeps onto his feet and is once again all confidence and briskness. His performance of the speech at Harfleur (‘Once more into the breach, dear friends...!‘) was sufficiently rousing that, when he gestured to the audience, I joined in with ‘Cry God for Harry, England and St George!‘, only to realise that no one around me was doing the same and to fade into an embarrassed silence. 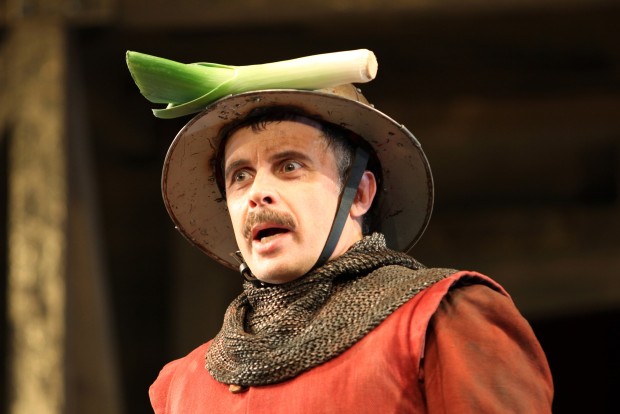 On the other hand, Parker sometimes seemed so keen to appear natural that he rushed his lines out, almost nonchalantly. This made it difficult to follow them and made him sound impatient to get them over with. I wished he would just slow down and take his time. He is a fine, natural actor and he must understand that you can’t speak Shakespeare’s lines at the speed of modern English – especially not when you’re performing outside.

He commendably approached the Crispin’s Day speech as if it were simply another part of the text – no flags, no posing, no background music, no consciousness that every ear in the house was hanging on his voice.  However, in a way this lack of emphasis – this lack of power and forcefulness at the moment when I think we all wanted a rousing battle cry and the hair to rise on the backs of our arms – took away from the speech’s power.  Of course I am biased. I adore Kenneth Branagh’s version of the speech and so it’s difficult for me to be truly objective about that particular part of the performance.

Let’s finish on another note of praise. After weighing up Parker’s performance for most of the play, I was utterly bowled over by his excellence in the final scene where he woos Katherine. Here he was absolutely perfect: charmingly self-deprecating, very natural, throwing lines over his shoulder to the audience as though they were ad-libs, engaging in banter with Katherine’s nurse… his sense of comic timing was perfect. After finally achieving the long-desired kiss, Henry hears the French king returning: ‘Here comes your father,’ Parker says, leaping away from the princess and fumbling for his crown, swerving once again from private man to public king – and getting his cloak on inside-out in the hurry. The audience loved it.

I can’t wait for my next visit, in just over a week, to The Taming of the Shrew.

* I wrote this post about three days before news broke of Harry’s game of strip billiards with a hen party in Las Vegas, so perhaps this comment is not as valid as I hoped… 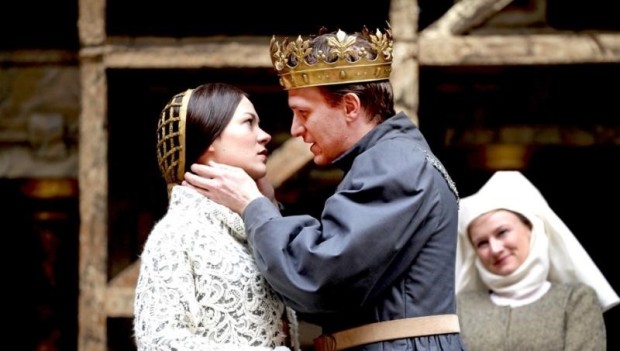