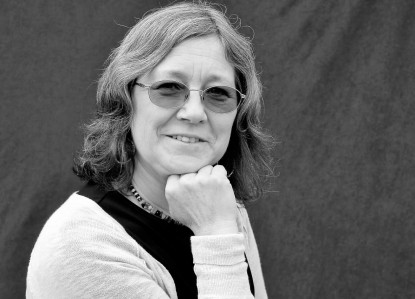 The Tawny Man Trilogy: Book I

Following on from my rereads of the previous two Robin Hobb trilogies, I’m now on to the third: The Tawny Man. After the wider scope of The Liveship Traders trilogy, with its large cast of characters, Fool’s Errand feels tighter, more focused and more intimate. Even on a second reading, I was gripped: this easily measures up to the best of The Farseer trilogy.

It’s necessary to have read The Farseer before moving on to The Tawny Man, because this book is so heavily dependent on the events of the earlier books that it won’t make any sense otherwise. It’s also important to have grown to know the characters through the earlier books, because so much of Fool’s Errand turns on the deep friendship between Fitz, Nighteyes and the Fool. You probably don’t have to have read The Liveship Traders as well, but there are a couple of neat references whose significance would be lost otherwise, such as the Fool’s characteristically irreverent decision to call his horse Malta, and Fitz’s unintentional visit to Others’ Island. It was an absolute joy to return to the Six Duchies again, not just because I was rejoining some of my most beloved characters in fiction, but also due to the quality of the writing. Fitz has a very distinctive narrative voice – aggressive, contemplative and poetic by turns – and I’m glad to have him back. And the Fool too, of course, with his enigmatic prophecies:

We must save the world, you and I.  Again… In the rutted path of fate, you
were a rock, my dear Fitz. And you have shifted the grinding wheel out of
its trough and into a new track. Now, of course, we must see that it
remains there. That may be the most difficult part of all.

Fifteen years have passed since the events of The Farseer trilogy and Fitz has made a modest new life for himself, under the name of Tom Badgerlock, in an isolated cottage far away from the politics and dangers of Buckkeep. He lives simply, with his adopted son, the foundling Hap, and his ageing wolf Nighteyes, but one summer brings a succession of unexpected visitors to his door. First comes Chade, the man who once trained him in the assassin’s art, who now serves as Counsellor to Queen Kettricken and her son Prince Dutiful. Fitz knows that there is no such thing as a simple visit from Chade: ‘He was not just one old man come to visit me. He brought all of my past trailing along behind him as an embroidered train follows a woman into a hall. When I let him into my door, I had let in my old world with him.’ Chade invites Fitz back to Buckkeep, to resume life at court as Skillmaster to Dutiful (who is more closely related to Fitz than Chade suspects), but Fitz refuses.

And yet he is less able to resist the appeal of another, far more welcome visitor who appears on his doorstep one day: the Fool, no longer the colourless boy Fitz remembers but a dazzling young man in shades of tawny and gold. Fate, it seems, is ready to catch them both up on its wheel once again. Neither Fitz nor the Fool can return openly, of course (though they have both changed so much that no one is likely to recognise them). Instead, Fitz finds himself dragged into an elaborate charade, under his name Badgerlock, as the bodyguard and valet of the Fool’s new persona, the spoiled, flamboyant Jamaillian nobleman called Lord Golden.

But there’s little time for Fitz to settle in, because he returns to Buckkeep to find that Prince Dutiful has vanished, barely a fortnight before his betrothal ceremonies. Suddenly his dreams begin to take on more significance: he has dreamed of a boy, hunting at night with a Wit-bonded cat; but who is the woman whose alluring voice beckons Dutiful on in these dreams? Fitz begins to realise that Dutiful has inherited more than the Farseer looks and, in a world where the Witted are loathed and sometimes even lynched, that presents a very real threat to the future of the Farseer throne.

Fitz’s world is rarely a light-hearted one and this book has more than its fair share of physical and emotional struggle, as he resumes the task of secretly defending his family, despite the toll it takes on him (‘Pain. That’s what being a Farseer means to me. Pain and being used.’). Moreover, he now has to face one particularly difficult parting – I’d forgotten exactly how this happened and so it caught me unawares: beautifully-written, perfectly judged and very moving. I can’t deny there was a bit of a tear in my eye. Oh; and, just in case you thought that Fitz might have grown wiser with age, be assured that nothing of the kind has happened. He’s still proud, defensive and bitterly lonely, tormented by memories of the life that he almost had with Molly, and tortured by his craving for the Skill, which invites him to just step into it and be swept away.

He remains deeply loyal to those he loves, chief among whom are Nighteyes and the Fool, and his conversations with these two sparkle with affection and wry humour: some of my favourite bits of the book were idle bits of banter which just fitted beautifully with the relationships between the characters. (I especially like the interaction between Fitz and the Fool’s alter ego, Lord Golden, whom I can’t help but feel is Hobb’s tongue-in-cheek homage to Sir Percy Blakeney.) The difficulty, however, is that Fitz’s emotional intelligence hasn’t really improved over the years either and he remains gloriously resistant to hints of any kind. He cherishes his close friendship with the Fool because it’s one of the few links to his boyhood that he has left, and it’s the kind of relationship where they can both occasionally throw in the word ‘love’ without Fitz having to confront the issue of what that actually means. He just takes it for granted without analysing it at all; and, although that works for now, it’s going to cause him problems later on. For it rapidly becomes clear that this trilogy has a romantic thread running through it, albeit a romance in which one of the participants is (for now, anyway) wilfully oblivious.

It’s been an unusual experience, returning to this particular trilogy. When I first read it I was in my late teens, with all that implies about being overly romantic, intense and fond of a good bit of angst. I mentioned on another occasion that it can sometimes feel as though you didn’t read a book early enough; but in this case, the timing was ideal. Even though the characters are considerably older than they were in The Farseer, that doesn’t mean that they (i.e. Fitz) necessarily have any clearer insight into their emotions or any better way to deal with what they do feel; and that sense of confusion chimed with my adolescent soul. Reading it again now conjures up all the old feelings. Every time I picked it up I felt myself plunged back into a kind of emotional maelstrom, which left me feeling febrile and light-headed, quite unlike the grown woman I purport to be. I rather liked it.

Here are some of the various covers. A gold star goes to John Howe for the cover of my edition (shown at the beginning of this post), who gets Fitz absolutely spot-on. And the wooden spoon goes to the German edition, where we see a phenomenon which Heloise explained with reference to the covers for Lady of the Forest. Rather than commission a new cover, the publishers have simply reused the artwork from Tad Williams’s The Dragonbone Chair which, beyond the fact that someone probably does carry someone else in the course of the book, is almost completely irrelevant to Hobb’s novel. But they hope that by putting her name on it, we won’t notice… 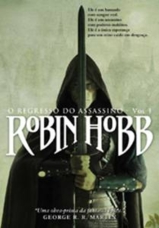 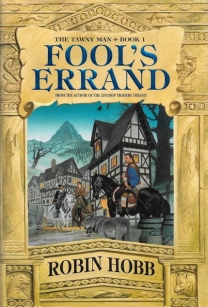 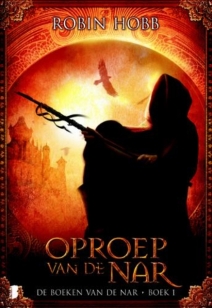 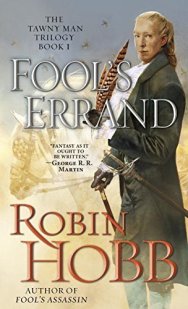