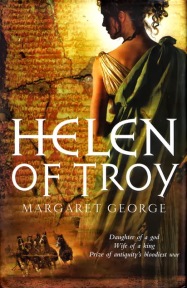 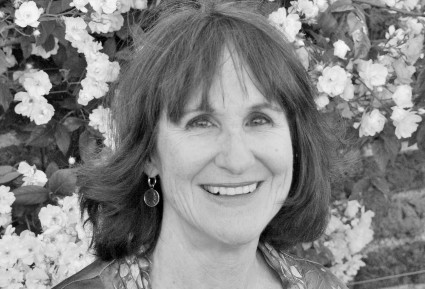 Although I bought this more than a year ago, I’ve only just got round to reading it, mainly because Helen recently reviewed another of Margaret George’s books, Elizabeth I. Remembering that I had this novel on my shelf, I decided it was time to take the plunge (at 747 pages long, it’s quite a commitment). It’s the first of George’s books that I’ve read, so I wasn’t quite sure what to expect, but I’m sorry to say that it doesn’t quite match up to Helen’s report on Elizabeth. While I could see that a lot of research had gone into it, it never developed the alluring sparkle and epic grandeur that I’d hoped for from the woman whose face launched a thousand ships.

Everyone knows the story. Said to be the daughter of Zeus, who seduced her mother Leda in the form of a swan, Helen of Sparta is blessed – and cursed – with great beauty. When the time comes for her to be married, suitors come from across Greece to compete for her hand; and she eventually chooses Menelaus, the younger brother of Agamemnon of Mycenae (who has already married Helen’s older sister Clytemnestra). Trying to avert a prophecy which says that Helen will bring blood and death to Greece, her father Tyndareus orders the disappointed suitors to swear a pledge to uphold the rights of Helen’s chosen husband. And so years pass. Helen and Menelaus have a daughter, Hermione, and settle into domestic life in Sparta, although Helen is deeply troubled by the fact that Aphrodite has cursed her with a lack of desire for her husband.

After much supplication, Helen wins the goddess’s favour and is granted the gift of love – though not as she had intended. She becomes immediately, overwhelmingly infatuated with the young Trojan prince, Paris, who visits her court as an emissary from his father. The attraction is mutual; flinging all cares aside, the lovers run away together to Troy: one of the greatest and wealthiest cities of the Mediterranean world. From the beginning, their happiness is overshadowed by an awareness of Menelaus’ anger at being cheated of his wife, but it is only later that this shadow turns to hollow fear – when word comes that the suitors have honoured their pledge and that a great fleet is sweeping over the ocean, come to besiege Troy and demand Helen’s return – by force and blood, if all else fails.

I can’t help but admire George’s accomplishment in forming a logical narrative out of the wealth of myths surrounding Helen and the Trojan War. She weaves the fragments together into a story that begins with Helen’s childhood in Sparta and takes us right through to the end, acknowledging the myth cycles of many peripheral characters along the way. (The only element of Helen’s story that I noticed was missing was the myth about her abduction by Theseus while she was a child.) This is no mean feat, and it’s evidently been done on the back of a lot of research and consultation: an author’s note at the end contains bibliographic material, as well as acknowledgements.

I enjoyed the early part about Helen’s youth, perhaps because it’s less familiar to me, but the pace slackened considerably during the Trojan War itself. After all, the war lasted ten years and, for much of that time, very little happened. Even Homer chose to start the Iliad in the tenth year of the war and skip straight to the good stuff, but George doesn’t have that option because she has chosen to tell Helen’s whole story. As a result, the narrative begins to lose its momentum and, by the tenth year, becomes little more than a dry recitation of the key developments, interleaved with melodramatically romantic scenes between Helen and Paris. The last few hundred pages were a bit of a slog. And I was disappointed to find that even some of the climactic moments of the war – Hector’s combat with Achilles, for example – were told in a rather perfunctory fashion, depriving them of dramatic verve and poignancy.

By viewing Helen’s story from a female perspective (rather than the more judgemental angle of the male-authored myths, plays and epic poems), George aims to make her a more rounded, sympathetic character. There’s just one problem: neither Helen nor Paris are innately sympathetic figures, being entirely too caught up in their passion for one another while their city staggers towards certain doom. Moreover, George doesn’t quite seem able to decide what she wants her Helen to be. At times she is shown to be insightful and intelligent, but at other moments she is desperately naive (in her surprise at not being welcomed more warmly in Troy, for example). On occasion she has the gift of foresight, which gives her vivid but unhelpfully imprecise glimpses of blood and battle, which do little but prompt ‘woe is me’ moments. This power also enables her to descend in spirit to the battlefield to listen in on significant exchanges between the commanders.

The latter flags one of the main issues of telling this story from Helen’s perspective: she simply isn’t present for most of the events of the Trojan War. While it’s obviously convenient for her to have out-of-body experiences at will, it does seem a bit gimmicky – as does her flash of prophecy which has her quoting from Marlowe’s Doctor Faustus two thousand-odd years before it was written. And is she divine or not? It’s never made clear here: sometimes it’s suggested that the swan story was a cover for Leda’s more earthly paramour. At other times Helen is privy to warnings direct from Zeus himself, who addresses her as his child. In fact, the presence of the gods is a tricky issue overall, with no hard and fast rules applying in the book. Zeus and Aphrodite only manifest themselves to Helen, as voices in her head or (in Aphrodite’s case) occasionally as a brief and strictly personal vision. Athena appears abruptly in the story, to address Hector in the form of his brother Deiphobus, and vanishes just as abruptly. Oenone is literally a water-nymph, erupting from the surface of a pool in a column of spray. But Apollo doesn’t appear in person at all and his plague arrows are rationalised as metaphors for the spread of disease. This makes for an uneasy mix of taking the story literally and rationalising divine interference.

If you’re a fan of hefty novels and you don’t mind a romantic rather than epic take on the Trojan War, then you might well enjoy this more than I did, but I just couldn’t help feeling that the book was missing the martial flair to do justice to its subject. Perhaps I came into it with the wrong expectations. Judging by other reviews I’ve read, this isn’t considered to be the best of Margaret George’s books, but I’m not sure I’ll necessarily get on better with any of her other works. But please do feel free to tell me if you think I’m wrong, and to recommend another of her novels if you think I’m in danger of missing something.