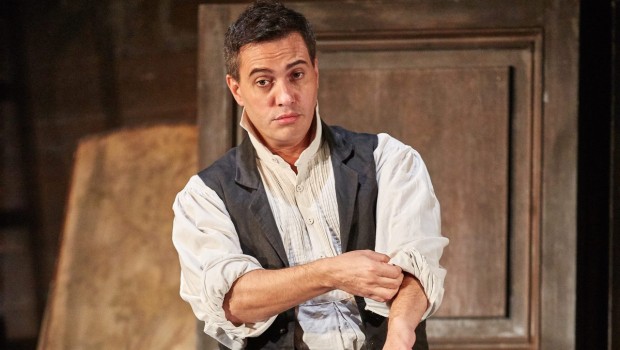 About a month ago I had a spate of ‘firsts’: my first Macbeth, in the striking film version and then, just a couple of days later, my first Figaro, thanks to the Royal Opera House’s excellent live cinema broadcasts. Heloise has been urging me to watch Figaro ever since I first expressed a cautious interest in opera about a year and a half ago. She can feel herself vindicated at last. Of course I would have loved to see the show in person, but thrift is of the essence and so I plumped for the cinema, and three hours of stunning close-ups and lush, intoxicating detail.

Much of my breathless adoration was directed at David McVicar’s gorgeous staging. You can get a brief flavour of it from the trailer, which uses footage from a previous version of this production. I’ve rapidly fallen in love with his opera designs, thanks to his witty Giulio Cesare and the sensuously Orientalist Abduction from the Seraglio. His concepts are sensitive, sumptuous and evocative: they exude painterly quality, down to the treatment of the light and the wealth of incidental detail. Even when the main characters are holding the limelight, life goes on in the background. And McVicar predictably has a field day with the bustle of the sprawling country house in Figaro. His lovers are surrounded by a bevy of servants, gardeners, tenants, hangers-on and pretty country lasses. The action unfolds in cluttered side-rooms, sunlight-flooded salons and moody moonlit gardens, while the costumes and hairstyles have been discreetly updated to around 1830: the women could have stepped straight out of a Lawrence portrait.

Since everyone else has probably seen Figaro fifty times, I doubt I need to give a synopsis; but, just in case… Figaro and Susanna are to be married, but Susanna is afraid that their employer, the Count, will try to exact his droit de seigneur upon her. The Countess, who knows her husband’s weakness, regrets the loss of his love and plots with Susanna, her maid and confidante, to teach him a lesson. Figaro is determined, by fair means or foul, to get his marriage solemnised as soon as possible. And the Countess’s adolescent page Cherubino, who has been driven half-mad by his turbulent hormones, believes himself in love with her. Oh, and the conniving Marcellina has turned up at the house claiming that Figaro promised to marry her several years ago. All in all, the scene is set for – as the opera’s subtitle has it – a truly crazy day. Who will prevail? 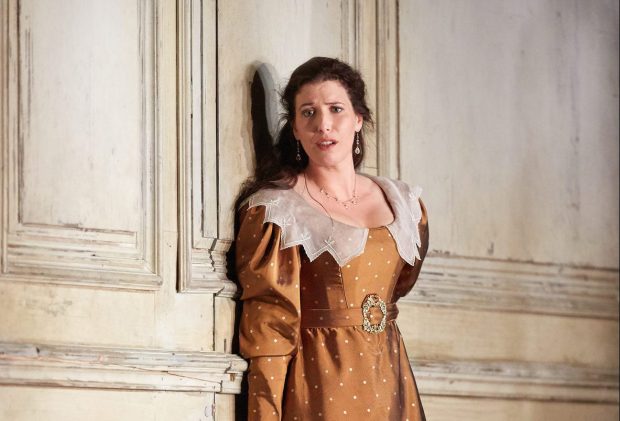 The Count is nominally the villain of the piece, but even he has human follies and frailties. Stéphane Degout played him as a calculating aristocratic lecher, but one who genuinely believes himself to be suffering from the pangs of love. Thanks to Degout’s height and ramrod posture, he was a marvellously authoritative presence; but it felt like a mask, easily unsettled. One of Degout’s finest moments, I thought, was in the Act 2 finale. Here the Count has been trying to force his wife to open a closet in her room, convinced she’s hiding a lover there. When he’s proven wrong, he begs forgiveness, but we can tell that he still thinks he’s been tricked. Degout’s voice echoed the character’s dramatic descent from triumphant scorn into baffled anxiety. I got the impression he didn’t necessarily think the Countess unfaithful, but he just couldn’t countenance the possibility that he might be wrong. I do wish I knew the story of the ‘prequel’, The Barber of Seville, because that might throw some more light on the character and how he came to be married to his beautiful, but clearly unhappy wife.

Ellie Dehn performed the Countess with an almost seraphic grace. She has the patience of a saint: injured by her husband’s suspicion, she’s nevertheless willing to give him the chance to redeem himself. And if, in the meantime, she shyly enjoys the boyish advances of her silly pageboy, then what of it? As Cherubino clumsily hints at his adoration for her, Dehn’s Countess actually blushes, touched by the kind of awkward admiration she no longer receives from her husband. Of course most of her music was rather serious, but her mellifluous voice elegantly put across the pain of unrequited love, and her (baffling) commitment to her husband.

For me, however, there were three stars of the show and, perhaps fittingly, they were Susanna, Figaro and Cherubino. Remember, I’d never seen the opera before so had no preconceptions, but I loved the way these characters interacted and how they loyally came up with ever more creative ways to protect and defend one another. Anita Hartig has been singing Susanna for most of the performances in this run, but on the night of the broadcast she was indisposed and so the role was taken over by Sophie Bevan (who was already slated to sing the part on 7 and 14 October). Between you and me, I couldn’t have been happier to see Bevan. I saw her in the odd Idomeneo last autumn, where the singers seemed to be ground down by the weight of Concept, and I was delighted to see her given the chance to shine here in Figaro. She’d posted mock-anxious tweets earlier in the day when the cast change was announced, but there was no sign of nerves in the finished performance. Her Susanna was an unparalleled joy: radiant, mischievous and warmly engaging. She was full of life and energy, and she had an excellent chemistry with her Figaro, even in the final scenes as she gently pushes him to see how far he trusts her. 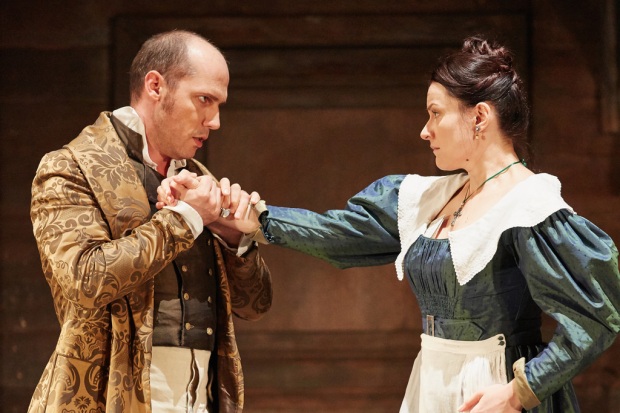 Count Almaviva (Stéphane Degout) and Susanna (Anita Hartig). There appear to be no photos of Bevan in the role

And, if I can’t imagine a better Susanna, I would be equally hard-pressed to think of a better Cherubino. Yes, I know that the role has been increasingly sung by countertenors in recent years (I’d love to see Ray Chenez‘s take on it in full), but there’s just something about Kate Lindsey’s boyish roles that I find irresistible. I came across her as a loose-limbed Annio in the Met’s Clemenza di Tito and loved her performance. I didn’t even realise she was in this until I was reading the programme in the cinema, before the lights went down. There are only a few singers who’d prompt me to squeak with delight on seeing their name on a cast list; but she’s one. A marvellous surprise. Her Cherubino has the same DNA as her Annio, but he’s a bit less naive and a little more predatory: that lovely, throaty mezzo took on Voi che sapete with ease. Ironically, Lindsey’s brilliance at playing young lads came through most strongly when Cherubino is dressed as a girl: rather than ease back a layer (i.e. girl-playing-girl) she added one (girl-playing-boy-playing-girl), emphasising Cherubino’s adolescent awkwardness as he galumphs around the stage, mortified by his disguise.

The abiding memory of the night for me, though, will be Erwin Schrott’s Figaro. When Simon Callow interviewed him during the interval, he said that Schrott was ‘the Figaro of our day’ and that it was a role he was particularly familiar with. You could see that. It was one of the best performances I’ve yet seen: his singing was wonderful, and he was incredibly naturalistic in a way that I haven’t seen with many other opera singers. His reactions and expressions felt utterly real and spontaneous, and he had an easy way with broad Italianate gesture. Laid-back, easily confident, quick thinking and good natured, Schrott wasn’t just performing Figaro; he became Figaro, and commanded the emotional heart of the production.

This production made me very happy. Figaro must be the most familiar opera in the world: even if you haven’t seen it, it turns out that you know half the music simply through osmosis. I came out of the cinema with a stupidly big grin on my face and sang Non più andrai and Voi che sapete all the way home. When I go to an opera I’m often amused or engaged or challenged, but genuinely heart-warming happiness is rare. I know that this production has been filmed in one of its earlier incarnations at Covent Garden, with a younger Schrott singing Figaro; but I do wish that they’d release a DVD with the cast from the broadcast. Really, Bevan and Lindsey were so perfect in their roles that I can’t imagine anyone else pulling it off so well. It was a delight, pure and simple. 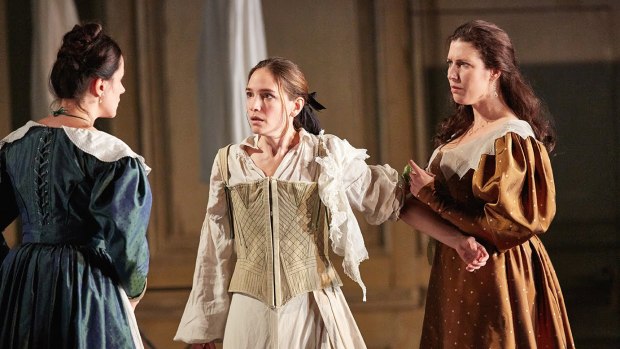 * Indeed, the timing of this post immediately after my thoughts on Rossi’s Orpheus gives the impression that the Bevan sisters are single-handedly taking over London’s opera scene.

10 thoughts on “The Marriage of Figaro (1786): Wolfgang Amadeus Mozart”