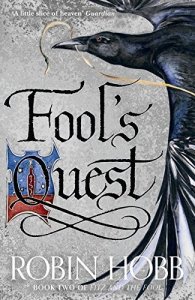 Fitz and the Fool: Book II

Some of you may remember that I had difficulty with the first book in Robin Hobb’s new series. Having been a devoted fan of her Farseer and Tawny Man trilogies, I felt that some of the tight-knit drama of those books had faded, and that Fitz’s story in the new trilogy had come to be governed by the meandering pace of her more recent Rain Wild novels. But I seem to be the only one who wasn’t convinced. There are many glowing reviews on Goodreads, Amazon and in the press. More than any of those, I give weight to Heloise’s opinion and I know that she enjoyed both the first book and this sequel. So I wanted, very much, for this second instalment in the series to show me how wrong I was. Did it? Well, not quite. But something picked up in the final pages and I’m now cautiously looking forward to the third and final (?) novel, which promises to fire on all four cylinders again.

When we last saw Fitz, he was at Buckkeep tending the frail and tortured body of the Fool who, against all odds, has come back into his life. Back at his country house, Withywoods, a troop of mysterious strangers have abducted Fitz’s little daughter Bee, leaving blood and fire in their wake, although as yet he’s unaware of this. Before plunging in, I should stress that there will be spoilers throughout this post, because in order to discuss what I liked and disliked about the novel, I have to speak of specifics. So forgive me. But I imagine that if you haven’t read this series you’d start with my post on Fool’s Assassin in any case.

Given the situation, I’d imagined the second book would open with a bang, as Fitz discovered his daughter’s kidnapping and leapt into action, no doubt with the Fool at his side, to go and get her back. But it doesn’t quite happen like that. The Fool’s severe injuries require long healing and a considerable part of the book has passed before Fitz even realises that Bee is gone; further precious pages elapse before he finds out who has taken her; and he spends most of the rest of the novel shilly-shallying around at Buckkeep before Hobb metaphorically puts a firework under his feet and gets him moving in the final chapters. Thus, pacing remains a problem for me, as it was in the first book. I really don’t believe Hobb will be able to wrap the story up in one more book, and I wouldn’t be at all surprised if Fitz and the Fool ends up expanding into a fourth novel, as the Rain Wilds did.

Part of me would be all too happy to spend a further novel in Fitz’s company, but it would be a shame if the series sprawled too much. One of the things I loved so much about Hobb’s earlier books was the momentum. They certainly weren’t high-octane, hundred-mile-an-hour steeplechases, but they felt compact and tightly-plotted, whereas this novel feels like a tapestry woven on a loom with the threads sagging a little loose. I also, just a little, miss the Fitz I know and love because at first I couldn’t recognise him here. Clumsy, impulsive, noble, loyal Fitz becomes vacillating and easily cowed, afraid to take the first step in the necessary journey. For three quarters of the book he’s thinking, “I’ve lost my daughter! This is terrible! I must ride and rescue her!” For the other quarter he allows himself to be thwarted by narrative devices which keep him mooching around at Buckkeep.

Now, that’s not all bad. I like a good season at Buckkeep as much as the next avid Farseer fan, and there was much to love here. Little scene-setting moments reintroduce us to the workings of the keep and to important secondary characters like Kettricken, Chade and Dutiful, while there are grander set-pieces, such as the emotional scene in which Fitz is finally publicly acknowledged by his family. I also enjoyed Fitz’s quiet conversations with the Fool, each trying to negotiate their way back to a friendship whose context has changed so dramatically. If Bee didn’t exist, I would like nothing better than to linger here. But she does exist and so these other things, pleasant as they may be, feel like distractions. Funnily enough, while Bee irritated me in the last book, I softened towards her here. Her voice grew on me, both naive and knowing, and I was interested to learn a little more about Dwalia and the world that we’ll encounter in full when we reach Clerres. But still it seems odd to me that Fitz – who, after all, normally behaves like a bull in a china shop – doesn’t hare off immediately after her.

Just as I was beginning to feel a little forlorn, something happened. Fitz finally sparked into action. We set our feet on the road to adventure, and some of that long-awaited flair came back into the story. I’d hoped, of course, that it would only be Fitz and the Fool going on the quest, but that wasn’t to be: we’re weighed down with an earnest entourage of well-meaning youngsters. At first I feared this was going to prevent our two heroes having any kind of meaningful conversation, but to my relief it looks as if that won’t quite be the case. Indeed (further spoiler), as the storylines from Buckkeep and the Rain Wilds merge, nothing could be more delightful than seeing how calmly this new, mature Fitz adapts to Amber.

I’ve said before that I almost think of Fitz as a real person, because I grew up with these books and I’ve known him longer than most of my friends. In the past books I’ve wanted to hug him, slap him and shake him until his teeth rattle, but I was proud of him here. He sees through the layers of disguise and the personas, and he simply accepts his friend as s/he is. And he behaves to Amber in such a gentlemanly way… helped, of course, by the fact that Amber is completely and convincingly a lady. I love the interaction between them. Could Fitz and Amber be happy in a way Fitz and the Fool couldn’t? Is Amber going to introduce Fitz to Paragon, and how would Fitz cope with that? Or is that my inner fangirl running away with herself? And then, just when I thought the book couldn’t please me any more, the Skill-bond between them was renewed. Honestly, I’m a serious and mature person, but I couldn’t help a ‘squeeee!’ at that point.

So we leave our beloved characters in a cliffhanger of a situation, with imminent peril on every side – something, admittedly, which happens fairly often if you’re Fitz. It’s interesting to read Heloise’s review of this book after finishing mine (I hadn’t read it before, so as not to be influenced). She picked up on many of the same things, but saw them in different ways: for her, Fitz’s failure to rush blindly into trouble after Bee is a sign of his new maturity rather than (for me) a shortcoming, and she may well have a point. Equally, Heloise points out that there is much less of Bee in this novel. Maybe that’s why I found it easier to bear her? Oops. She has drawn out some themes and structural patterns that I failed to notice, and her post is a far more objective guide than mine – since I have giving up ever trying to be anything but subjective about Fitz.

Heloise and I rarely disagree about books, it’s true, and I do agree with her about one thing in Fool’s Quest: I’m eager to know what happens next. I want to see how Fitz’s relationship with the Fool plays out in this world where Amber has the upper hand and, yes, I want to finally get to Clerres and to learn how Fitz plans to rescue Bee, and what the price will be.

The traditional Hobb Cover Feature, although sadly there are few to choose from as yet. Only the American and Dutch covers are available and neither are particularly wacky. 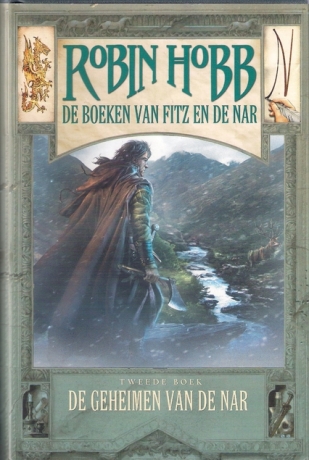