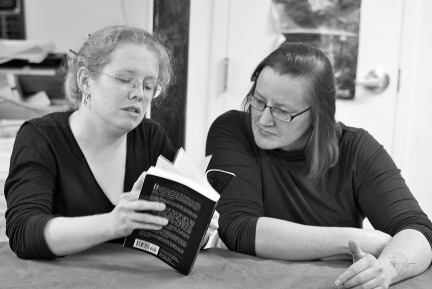 The Iskryne Saga: Book I

Ever since our joint reading of King Hereafter, Heloise and I have been keen to read another book together. We settled on this for several reasons, none of which had anything to do with the cover, I hasten to add. First, Heloise is a great admirer of both authors. Second, I loved The Goblin Emperor, cautiously enjoyed the Doctrine of Labyrinths sequence, and was keen to explore more of Monette’s fantasy worlds. Third, but by no means least, The Iskryne Saga focuses on a fantasy culture rich with Viking and Anglo-Saxon influences, and I was intrigued.

I was also, by the end of chapter four, rather embarrassed and unsure quite where to look. Monette and Bear, I discovered, don’t pull any punches with their sex scenes and, although they never quite reach the level of skin-crawling unease provoked by parts of Corambis, they were nevertheless frank enough to make my ears blush. They are well-written, but this isn’t a book for the prim, the squeamish or the homophobic. You have been warned. But let me explain the context, because that’s what makes the book so interesting as a story. Monette and Bear tackle the old fantasy cliche of human-animal bonding, which we see in books like the Pern novels, and fearlessly ask what it would actually be like to share awareness with another creature, especially if the bond of influence runs both ways.

When Njall Gunnarrsson is sixteen, the wolfcarls come seeking their tithe of young men. He is the son of a jarl, a local nobleman, but status is no protection in these dark days, when trolls roam the forests and wyverns have been spotted in the mountains. All that stands between these terrors and the common people are the wolfcarls: warriors who have bonded with the great trellwolves and devoted their lives to keeping the land safe. And yet the people fear them: there are scurrilous rumours about what these landless men get up to, and Njall’s father clearly believes the worst; but an obligation is an obligation. Njall must go. His father’s only hope is that Njall won’t be chosen for the bond and can come back home, away from the corrupting influences of the werthreat. But this wouldn’t be a fantasy bildungsroman if the hero simply came home again. Instead, when the alpha female Vigdis (the konigenwolf) gives birth to a litter of pups, Njall is immediately smitten with the fierce little bitch-puppy Viradechtis. As soon as she crawls towards him, he knows that he would sacrifice his life for her.

That might be required, one day. But for now Njall has to come to terms with something more immediately difficult: sacrificing his worldly notions of honour. When Viradechtis chooses him as her brother (her bond-partner), he must give up his family name. Instead he becomes Isolfr Viradechtisbrother, his identity tied to their bond. And he also has to learn the strange ways of this new world. The wolfcarls are not completely human, in that they share both their minds and their physical reactions with their wolves. This can be a bonus in battle, where man and wolf share a brutal ferocity. But there are also issues with such a bond, especially for those, like Isolfr, who are bonded to female wolves and must suffer the consequences of their season on heat.

The amount of effort that has gone into creating this world is impressive. You sink into a wealth of names and terms that initially seem bewilderingly unfamiliar – not helped by the fact that characters change their names on bonding with a wolf, and that you must remember both man’s and wolf’s names every time you meet someone new. But it all begins to make sense eventually. By the end of the novel, I was flinging around words like wolfjarl, wolfsprechend and heall like a native. And Monette and Bear care enough about their characters to make them richly individual. Isolfr himself is a confident leader but shy, sometimes even standoffish, in company. Viradechtis is proud, affectionate and domineering by turns. Of the other wolfcarls, the ones who stuck most in my mind were the scowling wolfjarl Grimolfr, mischievous Frithulf and taciturn Skjaldwulf who, as his name suggests, can conjure up songs and tales to pass the dark evenings. And then there are the two who trouble Isolfr most: the two who seem to hunger for power at his hands: blond Eyjolfr and redheaded Vethulf. If I overlook the wolves, Vigdis and Kjaran, Mar and Hroi, it’s just to avoid making long lists of names.

Yet the fact remains that, for all the brilliance of the worldbuilding, the plot seems slightly tenuous. It sometimes feels – and perhaps I’m being unfair – that the authors are most interested in the erotic relationships between members of the werthreat, and not so much in the trolls and wyverns and any other evil beasties that might be lurking out in the night. The first half of the book, indeed, has a certain paucity of martial action, though plenty of another kind. Things perk up in the second half, when we get to see more of the trolls and their culture, but the focus of the novel is very much on Viradechtis growing to maturity and taking her consort, and what that means for Isolfr as her brother. I just felt slightly frustrated that there was all this thought, and all this world out there, and we didn’t get a chance to see very much of it. However, perhaps that would have sacrificed some of the characterisation and I’m not sure I’d want to lose any of that either.

Don’t get me wrong. I’m all for sweaty, long-haired Northmen grappling in dim roundhouses, but I think this might have worked even better as a novel if there had been fewer pages devoted to that, and more to the supposedly dire threat from trolls. Nevertheless, there’s much to enjoy in the careful construction of the fantasy world: a society richly imagined and convincingly drawn, just as I would have expected from Monette (and Heloise assures me that Bear is equally reliable). I do also have the other books in the trilogy, so I will continue with Isolfr’s story in the hope of finding out more about the whys and wherefores of the wolfcarls’ epic battle against the dark – and, hopefully, of seeing Isolfr himself grow into his leadership. I suppose it has pleasantly shocked me in a transgressive kind of way (my ‘maiden aunt of Tunbridge Wells’ persona strikes again). My English innocence means that I find it slightly hard to get past the sex scenes when thinking of the story as a whole, and ultimately I’m going to have to judge it in light of the entire series.

Although it’s only a short book, and I read too fast, it’s been helpful and fun to discuss the themes with Heloise as we go. She has predictably come up with intelligent comments on structure, concept and worldbuilding, while I’ve been too busy blushing and trying to avoid unintentional innuendo in my emails. All in all, it’s worth seeking out if you’re interested in a clever, thought-provoking take on the animal-bonding trope. If you’ve read and enjoyed Doctrine of Labyrinths or Ellen Kushner’s Riverside or Tremontaine stories, then this’ll probably be right up your street.